Few characters have posed as much confusion and mystery on The Masked Singer as Thingamajig. The character has wowed audiences and judges alike (especially Nicole Sherzinger) but has continued to baffle when it comes to his celebrity identity. Who could he be?

The most popular theory circulating online is that Thingamajig is NBA player Victor Oladipo. There are several clues that line up with Oladipo’s own life, as well as some physical similarities. Read on below for the reasons as to why Oladipo could be Thingamajig.

Thingamajig Has a Personal Connection to ‘Star Wars’

Thingamajig said that he has never been called Chewbacca, but that he and the “Star Wars” character do “celebrate together.” It may seem like a vague clue on the surface, but it comes into focus when paired with Oladipo’s birthday. Oladipo was born on May 4, 1992, and May 4 just so happens to be National Star Wars Day (as in “may the fourth be with you”).

Oladipo has played for several teams, but he started his career with the Orlando Magic in 2013. This information came in handy during Thingamajig’s first clue video, where he performed magic tricks while holding up a pair of basketball shoes. Coincidence? It seems highly unlikely.

Both Oladipo & Thingamajig Have an Affinity for the Number 4

Thingamajig can be seen blowing out a number four candle during a clue video, and anyone familiar with Oladipo knows that four is his current jersey number on the Indiana Pacers. Then there is the verbal clue that goes, “What’s that he has? A magic case? Come on, y’all, keep up the pace.” It’s here that we have references to both Oladipo’s past (Magic) and current teams (Pacers).

Thingamajig Describes Himself as the ‘Feathery Kind’

Thingamajig described himself as the “feathery kind” during a clue video, and while the comment may seem odd, it once again snaps into place when compared to Oladipo’s favorite word: feathery. The NBA star has used the word on several occasions, and he describes it as a  lifestyle.

“Feathery is a way of life. It’s a lifestyle,” he told Vigilant Sports. “It’s better than better, it’s better than great, but it’s not heavenly. It’s right under that, it’s feathery. The great thing about feathery — it’s whatever you want it to be. Any and everybody can relate to it. It’s not for only me, it’s for you, too. Hopefully you guys can use it all over. Stay feathery.”

Who’s seven feet tall, brimming with charm, and is @NicoleShcerzinger's new boo? The one and only #ThingamajigMask! #TheMaskedSinger

Despite the mountain of evidence, Oladipo insists that he is not Thingamajig. “I don’t know what you’re talking about, man. I keep getting a lot of that lately,” he told FOX. “I don’t even watch the show. … The guy sounds pretty good, though.”

In a separate interview, Oladipo also said that he would have no reason to hide his face. “I keep getting that stuff, too, can y’all please stop @ing me?” he remarked. “I don’t even know what that is. Look at me, why would I hide my face, anyway?” 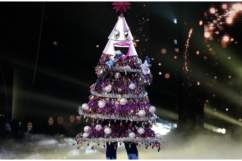