Season 2 of The Masked Singer is down to its last batch of characters, and fans are struggling to determine which celebrities are under which elaborate costumes. One of the characters still in the mix is the Tree.

Many believe that comedian and former Saturday Night Live cast member Ana Gasteyer is the Tree. None of the judges have been able to agree on a concrete theory, but fans seem convinced that the comedian fits the bill. Could this be true? Read on below for our reasons why Gasteyer could be the Tree.

In one of the Tree’s clue videos, we see a public locker with the number “30” on the front. 30 Rock is the address of Saturday Night Live studios, where Gasteyer rose to fame. She was a featured cast member on the show for six seasons, during which time she popularized characters like Cinder Calhoun (the singer) and Bobbie Mohan-Culp (the music teacher). Gasteyer’s lengthy stint on SNL may also account for the black-and-white TV that’s seen during the clue video.

The Tree Is Hoping to ‘Jazz Up’ Her Career

The Tree has said that she hopes to “jazz up” her career with her performances on The Masked Singer. The wording is carefully chosen, and another clue that Gasteyer is the one under the mask. She impersonated several different musicians during her time on SNL, including Celine Dion and Barbra Streisand. Gasteyer released a jazz album titled I’m Hip in 2014. And if she were indeed dressed like a Christmas Tree, it would be great promotion for Sugar and Booze, her new holiday album.

One of Gasteyer’s ‘SNL’ Characters Had a Baking Show

The Tree’s clue videos have packed in plenty of references to baking, which also leads back to Gasteyer. One of her most beloved SNL characters is Margaret Jo McCullen, who co-hosted the fictional radio show “Delicious Dish.” The format of each “Delicious Dish” sketch was to invite someone on with baked goods, and comment on the odd names for said goods.

Gasteyer Has Appeared In 4 Broadway Productions

Collectively, Gold Derby reports that the Masked Singer contestants have been on Broadway 22 times. Gasteyer’s Broadway history would support this theory, as she has appeared in four different productions: “The Rocky Horror Show,” “The Royal Family,” “The Threepenny Opera” and “Wicked.”

‘Tis the season! Do you know the celebrity behind the #TreeMask? #TheMaskedSinger

In addition to Gasteyer, some of the other guesses for the Tree have been singer Marie Osmond and celebrity chef Rachel Ray. Gasteyer has played coy about the possibility that she is the Tree. She doesn’t deny her involvement, but she did say that she thinks Osmond is the one under the mask. “There is a lot of speculation, and I am going to leaf you in the dark,” she told Entertainment Weekly.

“As far as I’m concerned, the internet is all telling me it might be Marie Osmond. It’s definitely a character that seems to be confusing a lot of people. Look, Robin [Thicke] really believes it’s Rachael Ray. So, I’m going to go with that or Marie Osmond. Those are going to be my personal guesses based on the evidence in front of me.” 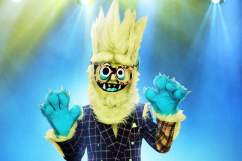 Could Victor Oladipo Be Thingamajig on ‘The Masked Singer’?