Facebook Michael and Juliana, stars of the TLC series "90 Day Fiancé," were married on October 12, 2019 in Greenwich, Connecticut.

Michael and Juliana, stars of the hit reality series 90 Day Fiancé, are still together today and recently tied the knot. The reality stars were married by Michael’s ex-wife (and Juliana’s close friend) Sarah during a beautiful ceremony in Greenwich, Connecticut last year in October.

A clip from tonight’s episode of the show sees Juliana trying on her wedding dress and getting fitted for alterations with Sarah in tow; although Juliana gets a little teary-eyed after donning her dress, it’s clear that the reality star is excited to marry Michael.

Michael and Juliana’s wedding will be included in upcoming episodes of the show, so fans will get a chance to witness their nuptials before the season comes to an end. In the meantime, we’ve stumbled across a few photos of happy couple on Facebook. You can check out the photos and details of their big day below:

Sarah Officiated the Wedding, According to the Marriage Certificate 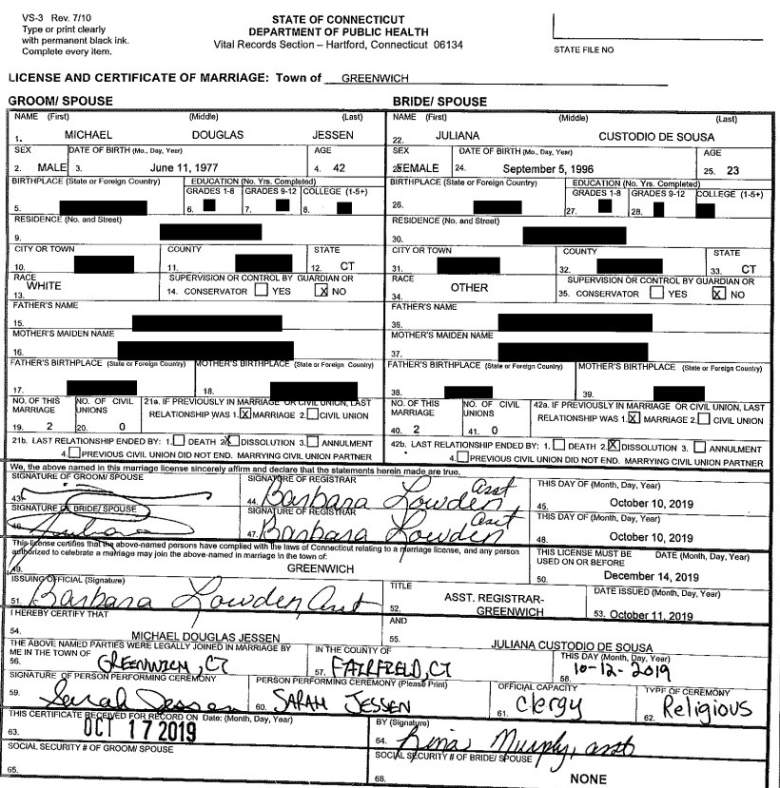 Michael and Juliana’s marriage license shows the two tied the knot in October, 2019.

According to In Touch Weekly, Michael and Juliana tied the knot in the U.S. in October. In Touch also obtained their marriage license, which features their wedding date and details – the two were married on October 12, 2019 and they had a “religious” ceremony, which was officiated by Sarah. In Touch reports that the couple had a fairly big wedding ceremony, which took place at Michael’s house in Greenwich, Connecticut.

Although fans might be shocked to learn that Sarah officiated the wedding, a source close to the couple told In Touch that the drama between the two earlier in the season was played up for TV, and the blended family reportedly gets along very well (which comes as no surprise since recent episodes have made it clear that the two are actually pretty close).

“Despite what’s reported about her not liking Juliana, her and Juliana get along really well in real life,” the source told In Touch. “Sarah has moved on and is engaged to be married. She’s happy for Michael that he found love again with Juliana.”

The marriage license also states that this is both Michael and Juliana’s second marriage; Michael was married to Sarah, with whom he shares two children, for several years before the two split and moved on. Juliana on the other hand told Sarah during a recent episode of the show that she was married once before as well, when she was just 17-years-old. According to the reality star, she was married to a man through an arranged marriage set up by her “cult-like” church.

For those who need a refresher, the reality couple met while partying on a celebrity yacht in Croatia over two years ago. Michael told TLC that he and Juliana were “kindred spirits” and that the two quickly fell in love after they first connected. Although there is a significant age gap between the two, Michael assured viewers earlier this season that he is not an “old sleazy, rich guy going after a young hot woman.”

“There are certainly a lot of people that may pass judgment, may think I’m just an old sleazy, rich guy going after a young hot woman,” Michael told the cameras during a confessional. “It doesn’t bother me at all. I don’t really care.” He continued, adding that it was “really, really hard to say goodbye” after the two first met. “But I knew it wasn’t the end. We had such a connection — it was just the beginning of something really beautiful.”

A handful of other wedding photos have surfaced in recent months, which we have attached below. Fans of the reality couple will have the opportunity to watch their wedding unfold over the next few episodes of the show, so stay tuned!

Juliana stands with Michael’s children during the ceremony.

Michael with his children Max and CeCe, who both stood up in the wedding.

Tune in Sundays at 8 p.m. EST to catch Michael and Juliana on 90 Day Fiancé and see how their love story plays out in the end. In the meantime, don’t forget to check out this author’s profile for all of your 90 Day coverage, and more.

READ NEXT: Michael Jessen’s Net Worth on 90 Day Fiancé: 5 Fast Facts You Need to Know