Reality Steve, whose real name is Stephen Carbone, is a popular blogger who covers shows such as The Bachelor, The Bachelorette and Tempation Island. The blogger is known for releasing extensive spoilers on the upcoming Bachelor Nation seasons and spinoffs, and although he is often spot on with his spoilers, he has been known to make a few incorrect calls early on in the show.

Over the years, Reality Steve has relied heavily on his sources and he usually isn’t wrong about the outcome of each season; however, when he is, he always updates his spoilers posts and typically predicts the correct outcome after.

“Every time I’ve had to change my spoiler in the past, it’s ended up being right, so, take that for what it’s worth,” he said of his past mistakes.

So which seasons has the reality blogger miscalled? Has he ever been wrong about the winner for previous Bachelor and Bachelorette seasons? Here’s what we know:

When Reality Steve released his episode-by-episode spoilers for Season 15 of The Bachelorette, he initially reported that Hannah Brown was engaged to contestant and second runner-up Tyler Cameron. However, a couple of weeks later Steve got some new intel and was able to confirm that Brown actually got engaged to Jed Wyatt, so shortly after he released his weekly spoilers, he updated his blog with the correct information.

“Basically every season I post the spoiler, at some point during the next few months someone will tell me the spoiler is wrong and they’re hearing different. Sometimes they’re right, sometimes my initial spoiler is right. This year has been no different. 3 weeks ago I started hearing that Hannah was with Jed and not Tyler,” Steve blogged. He said that he looked into the rumors and was able to confirm that Hannah did indeed choose Jed in the end.

Steve had waited a bit longer than normal to release his spoilers during Brown’s season because he wasn’t totally sure how the finale would play out.

“Let me just say this so there is no confusion. There is a lot of speculation about this season. A lot of hearsay. A lot of information coming from all different places that probably has a lot of people confused. This season has been different for me in that I’ve heard things that happen this season, but haven’t gotten the details behind it which makes it harder to report on. I’d like to get the details, but if I don’t, I know the second I report it,” Reality Steve blogged on May 7, 2019.

Steve’s spoilers aren’t frequently wrong but he has gotten a few things completely incorrect in the past, as was the case with Desiree Hartsock’s season. Steve initially reported that Hartsock chose Brooks Forester in the end, but after a dramatic finale, Hartsock ended up choosing Chris Siegfried, who she is still with today.

“If you’re expecting a long drawn out explanation regarding the wrong spoiler for this season, breaking down the who/what/when/where and why, I don’t have it. All season the information I was given had me 100% convinced Desiree was engaged to Brooks,” he wrote on his blog following the season finale.

Steve also previously reported that both Ali Fedotowsky and Kaitlyn Bristowe chose no one during their seasons, and then updated his predictions before the finale after receiving better intel. He also said that Brad Womack chose Chantal O’Brien on Season 15 of The Bachelor, but later changed his spoiler to Womack getting engaged to Emily Maynard.

According to this Reddit thread, Steve has only been completely wrong about Hartsock’s season until the very end. The reality blogger typically changes or updates his spoilers before the finale to reflect the correct information. 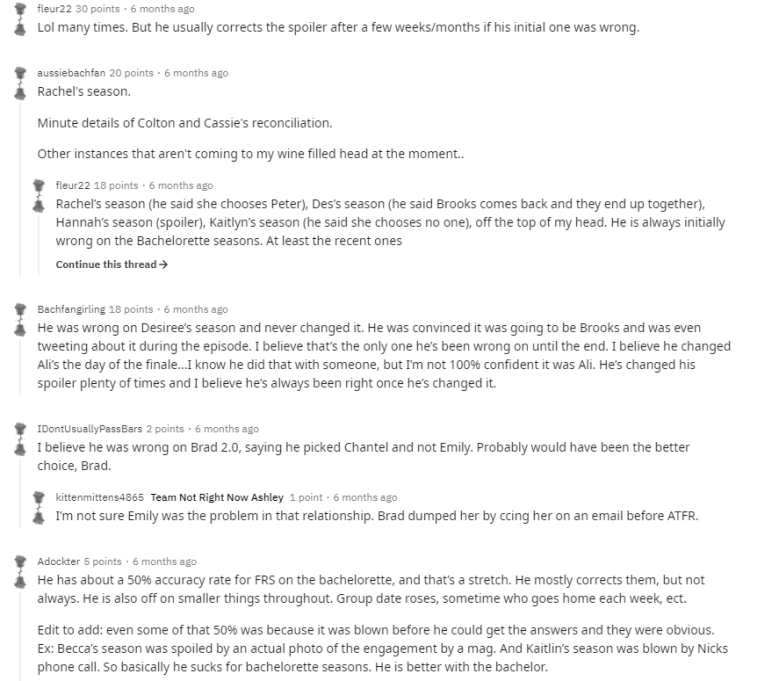 Reality Steve has been wrong about his “Bachelor” and “Bachelorette” spoilers in the past.

“He was wrong on Desiree’s season and never changed it. He was convinced it was going to be Brooks and was even tweeting about it during the episode,” Reddit user Bachfangirling wrote. “I believe that’s the only one he’s been wrong on until the end. I believe he changed Ali’s the day of the finale…I know he did that with someone, but I’m not 100% confident it was Ali. He’s changed his spoiler plenty of times and I believe he’s always been right once he’s changed it.”

Tune in Monday, January 6 at 8 p.m. EST to catch the three-hour premiere of The Bachelor on ABC. In the meantime, don’t forget to check out this author’s profile for all of your reality TV coverage and entertainment news!

READ NEXT: How Long Is ‘The Bachelor’ Season 24 Premiere Tonight?