TLC Carlton and Shantel Oglesby, siblings from Ohio who each weigh over 600 pounds, are the subjects of tonight's episode of "My 600 Lb Life," which airs at 8 p.m. EST on TLC.

Carlton and Shantel Oglesby, siblings from Columbus, Ohio who each weigh over 600 pounds, are the subjects of tonight’s episode of My 600 Lb. Life. Although the Oglesbys live in the same house, the two rarely see each other as neither sibling can make the trip to the other’s room due to mobility issues caused by their weight.

The TLC description of Season 8 Episode 8, titled “Carlton & Shantel’s Story,” reads, “Shantel’s brother Carlton lives downstairs but she hardly ever sees him because at 600+ lbs each, neither can do the stairs safely. They need Dr. Now’s help to break free from a death spiral of codependent eating & reforge their sibling relationship.“

Two siblings join together in the fight for their lives. Tune in to a new #My600lbLife tonight at 8/7c. pic.twitter.com/fi7RPe2nhS

In a sneak peek shared by TLC, the Oglesbys siblings explain that they first started turning to food as a coping mechanism when their father was abusing their mother.

“Food has always been a big part of me and Carlton’s life,” Shantel can be heard saying in the clip above. “It’s how we felt love and it’s how we felt safe.” She explains that their dad was in the military, so the family moved around a lot and the Oglesbys struggled with the constant change of scenery. Shantel notes that she didn’t like to always be the “new kid,” at school and adds, “I think that’s why me and Carlton got so close, because all we had was each other.”

The reality star reveals that she was 9-years-old, and Carlton was 7, when they realized that their mother was being abuse by their dad. “I really tried my best to hide it from my brother. When my dad got angry, I would put my brother in a room and turn the music on and then I would go and get something for us to snack on.

Carlton adds, “When things got bad and my dad was doing what he did, Shantel would always help me get through it all and made it better, usually by getting something that we liked to eat and bringing it to me.”

Carlton Was 786 Pounds & Shantel Weighed 638 When They First Began Their Weight Loss Journey With Dr. Now 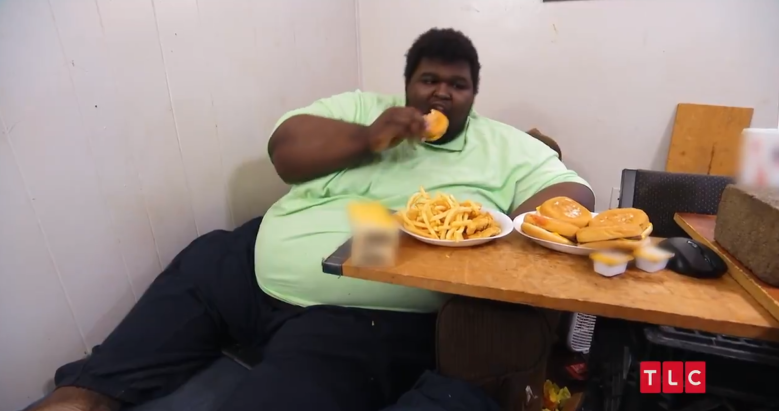 Carlton and his sister turned to food to cope with their abusive father.

Carlton weighed 786 pounds and Shantel tipped the scales at 638 pounds when the two first decided to seek out the help of celebrity bariatric surgeon Dr. Younan Nowzaradan. When we first meet the pair, Shantel and Carlton are living in their mother’s house with eight other people (including Shantel’s husband and children and Carlton’s girlfriend), and although the siblings consider themselves very close, they rarely saw one another. Shantel lived on the second floor, and both reality stars struggled to make the trip up and down the stairs to see the other.

“I never go out anymore,” Shantel says on tonight’s episode. “It’s been years since I’ve been out of the house and now I feel like I’m living to eat.” The reality star adds, “Food is like a drug to me and I have to have it all the time. Food is the only thing that makes my day better.”

Shantel and Carlton decide to travel to Houston to begin Dr. Now’s weight loss program, and with the love and support of their spouses, children and loved ones, the two make the trip to Texas. Unfortunately, Shantel runs into some issues along the way, and after the pain of traveling to Houson became too much, Dr. Now decided to meet the Oglesbys halfway.

After assessing the situation with Shantel and Carlton, Dr. Now notes how serious their situation is, and says that they have “a lot of work to do to make a difference, before it’s too late.” He adds that it’s officially “a matter of life or death” and that the siblings have to stop being each other’s enablers if they want to succeed.

Both Reality Stars Lose Hundreds of Pounds in the End

Although neither sibling was initially approved for weight loss surgery during their first checkup, Dr. Now recommended the two see a therapist while they continued dieting, which seemed to make a tremendous difference. According to Distractify, by the Oglesbys’ next weigh-in several months later, both Carlton and Shantel lose over 130 pounds each: he loses 132 and she loses 136, Distractify reports.

“I’m very proud of Shantel and Carlton,” Dr. Now tells the cameras. “They’ve worked very hard these past months and have shown me that they’re taking this opportunity to change their lives very seriously.”

In the end, Carlton managed to shed an impressive 243 pounds, bringing him down to 544 , and Shantel loses 215 pounds altogether, landing her at 424 pounds. Their successful weight loss journeys gave both the Oglesbys siblings a new lease on life: by the end of the episode, Carlton is out looking for a job and is determined to treat his girlfriend to a better life, and Shantel is hoping to make up for lost time with her children by leading a more active lifestyle and spending more time with them.

It’s unclear if the Oglesbys have continued to shed weight today. We can’t find a social media page for Carlton, and although Shantel’s Facebook page is public, she hasn’t posted any recent pictures or progress updates for her followers. Cross your fingers that she and Carlton get a follow-up episode sometime in the near future so we can get an update on their weight loss journeys!

Read More
My 600 lb Life, Reality TV, TV
Carlton and Shantel Oglesby, siblings from Ohio who each weigh over 600 pounds, are the subjects of tonight's episode of "My 600 Lb Life," which airs at 8 p.m. EST on TLC.