Popular British TV host Caroline Flack was found dead inside her London apartment on February 15. She was 40.

Flack’s family released the following statement to The Sun: “We can confirm that our Caroline passed away today on the 15th February. We would ask that the press both respect the privacy of the family at this difficult time.” She is survived by her parents, Christine and Ian, brother Paul, and sisters Elizabeth and Jody.

In December, Flack stepped down from her hosting job of the popular U.K. reality series Love Island after she was charged with assault following an altercation with boyfriend Lewis Burton, 27.

Jesus …Last day of my 30s …. and what a ride it’s been so far … feeling so utterly grateful for EVERYTHING in my life right now … and never felt quite so happy as I do today … can’t WAIT for this weekend … and 40 isn’t old … if you’re a tree

To her 2.3 million followers on Instagram, she wrote, “There have been a significant number of media reports and allegations in regards to my personal life. While matters were not as have been reported, I am committed to co-operating with the appropriate authorities and I can’t comment further on these matters until the legal process is over.”

“In order to not detract attention from the upcoming series I feel the best thing I can do is stand down for Series 6.” She also thank her family and friends for their support during this difficult time. “On a really personal level. I have never experienced such kindness and love in my whole life.” The popular Internet personality publicly shared her struggle with depression in the past.

Following the news of her untimely death, tributes to the reality TV star were shared online and users on Twitter expressed anger for how she was hounded by the tabloids following her assault charges, despite her boyfriend not wanting to prosecute.

Utterly devastating about Caroline Flack. She was a fun, kind beautiful person, always loved seeing her. So unfair that this has happened. Let’s pray we learn from this and remember to be a little bit more compassionate to people when they are down.

Boy George tweeted, “I hope all of you who attacked Caroline Flack even when her partner said he wanted no charges feel some sorrow today. This did not need to happen. This is devastating news! And yes, I hope the @cpsuk feel even deeper sorrow.”

Here’s what you need to know about Caroline Flack:

1. Flack & Lewis Appeared To Be On Good Terms Despite Their Legal Issues

You can leave your hat on … @mrlewisburton

On Valentine’s Day, Lewis posted a sweet message to his on-again love on social media. On his since-deleted Instagram stories, he shared a photo of the couple with the caption, “Love you” and the kissing face emoji. Lewis also had spoken out against the prosecution of Flack.

Flack was charged with assault by beating on December 13, which took place early in the morning at her home in London. As reported by Hello magazine, Flack appeared in court two days before Christmas to enter a not guilty plea in response to the charges.

According to The Sun, Lewis, an ex-tennis player heard the news of Flack’s death while on a skiing trip with friends and returned to London as quickly as possible. 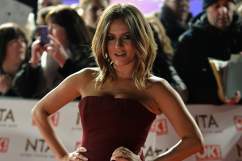 The actress and TV host became a regular name in the tabloids following a romance with a young Prince Harry. The couple started dating in 2009 after being introduced by a mutual friend, Natalie Pinkham, according to The Daily Mail.

However, Flack said they were forced to break up before their relationship “got out,” and found that dating a prince wasn’t all that it was cracked up to be. She said, “I was no longer Caroline Flack, TV presenter, I was Caroline Flack, Prince Harry’s bit of rough.”

The British X-Factor host went on to date pop singer Harry Styles, who was only 17-years-old at the time. She was 17 years his senior. This relationship was also tough on the famous TV personality. She wrote in her autobiography, Storm in a C Cup: “Once that was out, it was open season. After that, anyone could say anything. In the street, people started shouting at me ‘pedophile” and “pervert.'”

“There was a moment when we just thought, s***, this has gone really dark. So perhaps we did the wrong thing, who knows.”

Even X-Factor executive producer Simon Cowell needed answers to her relationship with Styles. “Were you two really in love?” he asked Flack. She answered that it was “just a bit of fun” in her autobiography and said that Cowell commented on her former relationship by saying, “It really astounded me.”

She was briefly engaged to Andrew Brady in April 2018 after three months of dating, but they separated in December 2018. 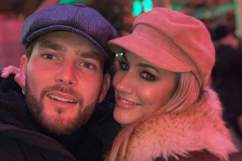 3. After Flack Won The Reality-Competition Series ‘Strictly Come Dancing,’ She Fell Into A Deep Depression

Start training for Strictly tomorrow with my new partner !!! It’s good to be back ❤️

In 2014, Flack cemented her status as a reality TV star by becoming the champion of BBC One’s Strictly Come Dancing with dancing partner Pasha Kovalev. Afterward receiving the Glitterball Trophy, she was personally contacted by Simon Cowell to join his popular reality series, X-Factor, as its new host.

Flack returned to compete on the series during a Christmas special episode in 2018 with dancing partner Gorka Marquez and opened up about the depression she felt after winning four years prior.

She told The Sun, “It all started the day after I won Strictly. I woke up and felt like somebody had covered my body in clingfilm. I couldn’t get up and just couldn’t pick myself up at all that next year. I felt ridiculous, being so sad when I’d just won the biggest show on telly and had such an amazing job.”

Flack started taking anti-depressants but admitted that she became “too reliant” on them and found herself in a “numb state,” feeling “held together by a piece of string. I eventually went to a juice retreat in the Mediterranean to wean myself off them. It was the only way I could get them out of my body.””

4. Flack Started Her Career As An Actress Before Turning To Reality-TV

Before appearing on shows such as ITV2’s I’m a Celebrity… Get Me Out of Here! NOW! from 2009 to 2010, and served as host for The Xtra Factor for three-seasons, Flack was pursuing a career in scripted TV.

According to her IMDB page, she starred as Bubbles in the series, Bo’ Selecta! from 2002 to 2004, and guest-starred as herself on Lemon La Vida Loca in 2013. She also appeared in LOVE magazine’s short film, Love Advent, starring Kendall Jenner, Emily Ratajowski, and Bella Hadid.

5. Flack Broke Her Social Media Silence To Share One Last Photo The Day Before Her Death

One day before her death, on Valentine’s Day, Flack shared a series of photos with her dog with the simple heart emoji serving as the caption. It was the first post she shared in seven weeks following her extremely public legal battle against assault charges.

Been advised not to go on social media … but I wanted to say happy Christmas to everyone who has been so incredibly kind to me this year….. this kind of scrutiny and speculation is a lot to take on for one person to take on their own… I’m a human being at the end of the day and I’m not going to be silenced when I have a story to tell and a life to keep going with …. I’m taking some time out to get feeling better and learn some lessons from situations I’ve got myself into to.I have nothing but love to give and best wishes for everyone ❤️

She wrote on Christmas Eve, “Been advised not to go on social media … but I wanted to say happy Christmas to everyone who has been so incredibly kind to me this year….. this kind of scrutiny and speculation is a lot to take on for one person to take on their own… I’m a human being at the end of the day and I’m not going to be silenced when I have a story to tell and a life to keep going with …. I’m taking some time out to get feeling better and learn some lessons from situations I’ve got myself into to.I have nothing but love to give and best wishes for everyone.”

READ NEXT: Rick Moranis Returns to Hollywood: 5 Fast Facts You Need to Know