Demi Lovato and her former boyfriend Austin Wilson broke up in December 2019 after a brief relationship. The 27-year-old singer and Wilson, a 25-year-old model, had been friends for a while before they started dating, according to sources. Their relationship came after Lovato’s near-fatal overdose in July 2018 that came after a relapse of her addiction to drugs and alcohol.

Lovato will be singing the National Anthem at Super Bowl 54 on Sunday, February 2 before the Kansas City Chiefs play the San Francisco 49ers. Lovato is starting to re-emerge into the public eye and the music world. She performed at the Grammy Awards on January 26, debuting her new single “Anyone.” The pop superstar is set to release a new album sometime in 2020. It will be her follow-up to 2017’s “Tell Me You Love Me.”

Wilson, meanwhile, remains in Los Angeles and appears to be continuing his modeling career after the break up with Lovato. It does not seem like either of them is currently dating anyone else. Lovato is single as she is opening about her vulnerabilities and personal life in her new music.

You can read more about Austin Wilson here.

Here’s what you need to know about Demi Lovato’s break up with her ex-boyfriend Austin Wilson:

Demi Lovato & Austin Wilson Broke Up as She Focuses on Herself & Her Music Career, Sources Said

The breakup between Demi Lovato and Austin Wilson came as Lovato refocused on herself and her music career, according to sources.

“She’s concentrating on herself and her work right now, as well as focusing on her relationship with God,” a source told People magazine. “She’s excited for what this next chapter in 2020 will bring.”

Wilson and Lovato both deleted photos of their time together from their Instagram accounts, where they had shared intimate moments in November and December 2019. They had been dating for a few months, but only went public on Instagram a month before they split up.

A source told E! News, “Their lifestyles were not meshing. She’s very focused on her sobriety and God and it wasn’t a good fit for that. She’s still working on herself and committed to that. She’s sticking with what she has been doing and working on her music. That’s her focus and nothing is going to change it. They decided it was best to go their separate ways. There are no hard feelings, it just wasn’t going to work with him.”

Some of Lovato’s friends were surprised by the breakup, Hollywood Life reports.

“They didn’t see it coming,” a source close to Lovato told the website. “They had spent Thanksgiving with Demi who brought Austin along and thought they seemed so happy together. Demi appeared to have gotten along with him so well and her friends definitely saw a spark between them so they couldn’t believe when they heard the news of their breakup.”

Another friend told Hollywood Life, “Everyone was all in for this relationship that Demi had with Austin and they loved seeing it turn into something they all her friends thought was very special. Demi never let on that there was trouble and some think they might even get back together. But to say it was a surprise that they broke up, especially around the holidays was definitely a shock.” 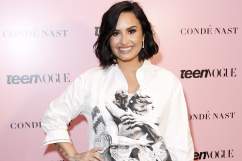 Obsessed with this glam and fit (and apparently this filter) ??

As Demi Lovato promotes her new single and upcoming album, she has been opening up about her personal life. Lovato talked to Andy Cohen on his Sirius XM show about how she came out to her parents.

She said it was a “beautiful” moment in 2017 when she told her parents she could end “up possibly with a woman.” She told Cohen she is still “figuring it out.”

How Demi Lovato Came Out to Her ParentsAndy Cohen asks Demi Lovato what she sees in the future for her personal life. Hear more from Radio Andy on our app! Click here for your trial subscription: https://siriusxm.com/yt/freetrial Subscribe to SiriusXM on YouTube: http://www.youtube.com/siriusxm Connect with SiriusXM Online Facebook: http://www.facebook.com/siriusxm Twitter: http://www.twitter.com/siriusxm Instagram: http://www.instagram.com/siriusxm You can hear entire episodes of SiriusXM programming on…2020-01-31T13:09:54.000Z

“It was actually, like, emotional but really beautiful. After everything was done, I was, like, shaking and crying, and I just felt overwhelmed,” Lovato told Cohen on January 31. Lovato said he parents have been “incredible” and supportive.”

She said, “My dad was like, ‘Yeah, obviously.’ And I was like, ‘Oh, OK, Dad.’ My mom was the one that I was, like, super nervous about, but she was just like, ‘I just want you to be happy.’ That was so beautiful and amazing, and like I said, I’m so grateful.”

Read More
Breaking News, Celebrities, Demi Lovato, Music, Super Bowl
Demi Lovato and her former boyfriend Austin Wilson broke up in December 2019 after dating for a few months. The split came as Lovato concentrates on herself and her music career.