TLC/YouTube Joyce Del Viscovo, a 44-year-old Kansas native who weighs 758 pounds, is the subject of tonight's episode of "My 600 Lb Life," which airs at 8 p.m. EST on TLC.

Joyce Del Viscovo, a 44-year-old Kansas native who weighs 758 pounds and has a BMI of 160, is the subject of tonight’s episode of My 600 Lb. Life. Joyce turned to celebrity bariatric surgeon Dr. Younan Nowzaradan for help after she was forced to close down a daycare center that she had been running for several years due to her extreme weight and immobility.

The TLC description of Season 8 Episode 7, titled “Joyce’s Story,” reads, “Joyce needs home health care 24/7 and hasn’t left the house in years. But getting to Dr. Now in Houston is just the first step, and when he prescribes therapy where Joyce must revisit an unhappy past with her mom, it may be more than she can handle.”

Joyce’s episode airs tonight, February 12, 2020 at 8 p.m. EST/7 p.m. CST on TLC. Here’s what we know about the reality star ahead of tonight’s debut (Warning: some spoilers on Joyce’s journey ahead! Turn back now if you don’t want anything ruined for you before the episode airs!):

Joyce Wants to Say Just ‘Shut Up & Give Me The Food!’

"Shut up and give me the food!" While Joyce and her caretakers know it's time to start eating healthier, they struggle with changing old habits. Follow the journey tonight at 8/7c on #My600lbLife. pic.twitter.com/ALc7VaXeI6

The clip above introduces Joyce, who says she wishes her caretakers would just “shut up and give [her] the food” instead of berating her on the amount of food that she eats in one sitting. She also notes that her family and friends are part of her problem, and she blames them for continuing to feed her large amounts of food everyday instead of trying to help her stick to a diet.

“I know my family and Dawn are all worried about me,” Joyce can be heard saying in a voiceover. “And they don’t think I’m going to make it much longer. But just like me, they keep doing what they’ve been doing, and help me eat the stuff I’m not supposed to have now. And I know when I do that, my mom’s judging me when I eat a lot.”

The reality star continues, “But as much as it bothers me, there’s part of me where I don’t care. I almost have the attitude of ‘duh, I don’t get this big eating small amounts, so why would you expect me to do so?’ So I just want to say, ‘Shut up and give me the food! And leave if you have a problem with it.'”

According to Distractify, Joyce’s food addiction began at the early age of 8-years-old, when her parents divorced. Joyce’s mother moved in with her boyfriend and left Joyce in the care of her grandmother, who overfed Joyce and kickstarted her dependency on food as an emotional crutch.

Joyce reached 90 pounds before she turned 9-years-old, and once her mother came back and noticed how much weight she’d gained, she was forced to go on “abusive diets” to try to rectify the mistake that Joyce’s grandmother had made, according to the reality star.

Due to her mother’s strict diets, Joyce began to take drastic measures to sneak food and snacks, Distractify reports. “No matter what anyone did, I found a way to get food,” she shares during tonight’s episode. By the time she turned 16, Joyce got a job at a fast food restaurant, and by 18, she weighed around 300 pounds. She was “well into the mid 400s” at 20-years-old, according to the site.

She Ends up Dropping Out of Dr. Now’s Program 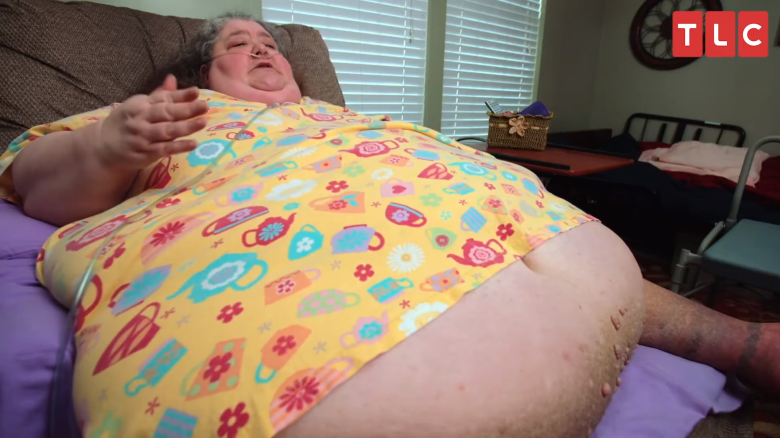 Joyce is the subject of tonight’s episode of “My 600 Lb Life.”

Joyce gave a dozen different excuses for why she wasn’t able to lose anymore weight than what she did, including claiming the scale was broken and that Dr. Now’s diet was “unfair” and “unreasonable.” She also said that she gave, “110% to the program so I’m not failing the program, the program is failing me.”

It’s unclear if Joyce has continued to lose weight today, or if she’s found a different program or doctor to help her on her journey. Her Facebook page doesn’t show any progress pictures or give any indication if the reality star has continued to try to lose weight, and there are no recent photos of Joyce on the page, so fans will just have to wait and see if she snags a follow-up episode with My 600 Lb Life.