Jennifer Lopez and Marc Anthony were one of the most popular celebrity couples of the last few decades. They were married a little more than 10 years, from June 2004 to June 2014. Technically, the pair separated in July 2011, but their divorce wasn’t finalized until 2014. They remain on good terms.

They dated six months before they tied the knot in 2004, which was the same year Lopez ended her very public engagement to actor Ben Affleck. Instead of announcing they had gotten hitched, Lopez and Anthony began sporting matching bands on their left ring fingers, letting the very curious public connect the dots.

Here’s what you need to know about Lopez and Anthony’s relationship:

1. Marc Anthony Gave Jennifer Lopez the Most Expensive Engagement Ring She Has Ever Had

JLo has been engaged five times in her life, and while her most famous engagement ring was the $2.5 million, 6.1-carat pink diamond Ben Affleck gave her in the early 2000s, her most expensive engagement ring ever came from Anthony.

Anthony gave Lopez a $4 million, 8.5-carat blue cushion-cut diamond when he proposed, which remains the priciest ring she has ever received.

2. Anthony’s First Words to JLo Were Prophetic…& a Little Weird 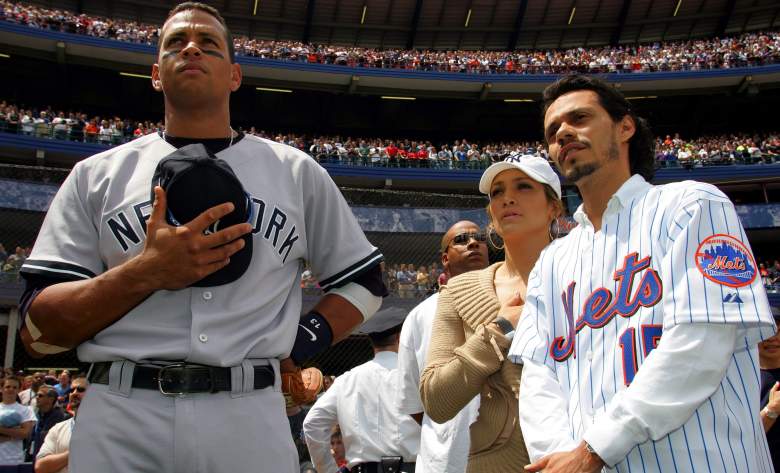 GettyAlex Rodriguez #13 of the New York Yankees stands for the National Anthem with Jennifer Lopez and husband Mark Anthony before the game against the New York Mets on May 21, 2005. Lopez is now engaged to Rodriguez. (Photo by Chris Trotman/Getty Images)

According to her memoir, True Love, JLo wrote that Anthony’s first words to her predicted their eventual marriage. “One day you’re going to be my wife,” he told her back in 1998 when they first met. The pair originally met when Anthony was performing in the musical The Capeman on Broadway. They reportedly dated briefly at the time, but broke up a few months later.

The photo above stands out because while JLo and Anthony were married at the time it was taken, they later divorced, and she would go on to fall for and get engaged to the other man in the pic, former Yankees star Alex Rodriguez.

3. They Recorded a Song on Her Debut Album 5 Years Before They Were Married

Accompanied by a steamy video in which their palpable chemistry was easily visible to the masses, the two recorded “No Me Ames” together in the late 1990s. The song was off JLo’s debut album, On the 6. “I was such a huge fan of his music in Spanish,” Lopez said at the time of her ex-husband’s talents. You can watch the video in its entirety below.

4. They Have 11-Year Old Have Twins Together

Those who can, do. Those who can’t, sit between two people that can and stay quiet! #imnotasinger

Lopez and Anthony have two children together, 11-year old twins, Max and Emme, and they have managed to co-parent and get along swimmingly after their breakup. They are also setting a solid example as to how well blended families can work.

JLo is currently engaged to former baseball star Alex Rodriguez, who shared a video on his Instagram page featuring both Lopez and Anthony singing along with Max during a concert he was performing in.

Reunited in 2016 at the Latin Grammy Awards, JLo presented Anthony with a Person of the Year award before planting what many considered to be a controversial kiss on her ex-husband. Anthony was married to then-wife, model Shannon de Lima at the time of the kiss, but not even a full 24-hours after their performance, Anthony and de Lima announced they had called it quits.

“Marc is a living legend,” Lopez said of Anthony in her speech. “He is a magical and pure artist giving away classics that will stay forever. He will always be many things in my life.”

READ NEXT: What Is Shakira’s Net Worth?