Instagram Victoria Fuller has been at the center of several controversies and some serious drama during her short time on Season 24 of "The Bachelor."

Victoria Fuller, one of the remaining contestants vying for Bachelor star Peter Weber‘s heart, recently came under fire after photos surfaced online featuring Fuller modeling what some believed to be a “White Lives Matter” brand of clothing. Although Fuller has remained relatively quiet about the controversial photoshoot, Weber has since addressed the controversy and condemned the WLM campaign, while still remaining supportive of Fuller.

“It’s definitely been tough to see this unfold,” Weber told People last week. “To be honest I’m learning about all of this in real time just like everybody else is,” he said. “At this point right now, I see a lot of headlines about my response, and my support has been taken out of context. I in no way support that kind of campaign.”

Here’s what you need to know about the brand WLM Apparel and Clothing, Fuller’s involvement with the company, and Weber’s statement about the photo:

ApPaReNtLy this is for white marlin conservation but I’m having a hard time believing that’s the only message these clothes are sending https://t.co/opYMqcLDaH

According to Fox News, a photo of Fuller sporting a royal blue hat with the letters “WLM” was posted by the brand WLM Apparel and Clothing on Instagram. After the photo resurfaced shortly before the Season 24 premiere of The Bachelor, fans dug up the brand’s (now-deactivated) Instagram page, which featured several clothing items with the confederate flag emblem.

Although her choice of modeling apparel was questioned by viewers, a few social media users pointed out that the clothing line also featured fish logos, which could represent the “White Marlin Conservation,” Fox reports. It turns out the Maryland-based clothing company was selling apparel to support the conservation of white and blue marlins, which are deemed “vulnerable,” according to this journal of Science. Fuller herself announced on social media that the brand’s name (WLM) stands for “We Love Marlins,” which you can read more about below.

Fuller’s involvement in the WLM campaign didn’t initially gain widespread attention until last week, when Cosmopolitan pulled its digital cover featuring Fuller and Weber from it’s site. “Unequivocally, the White Lives Matter movement does not reflect the values of the Cosmo brand,” Cosmo editor-in-chief Jessica Pels wrote last Monday. “We stand in solidarity with Black Lives Matter and any cause that fights to end injustices for people of color.”

Fuller still hasn’t issued an official statement on the matter since Cosmo pulled the digital cover and the backlash against her involvement with WLM intensified. However, according to another article by People, the reality star did address the issue shortly before the new season aired in January.

After the Instagram account BachelorClues shared a photo of Fuller alongside her WLM modeling picture, the reality star took to social media to explain that the brand stands for “We Love Marlins” and that she was involved in a campaign to raise awareness of the declining marlin population, which she says has nothing to do with the White Lives Matter movement.

“Hello bachelor clues followers!” she wrote, according to People. “It would be nice for you to gather all facts before jumping to bash someone. The company ‘We Love Marlins’ is in support of catching white, blue, and black marlins & releasing them back into the wild. In regards to a sensitive topic, I come from a VERY large fishing town where Marlin tournaments are held every year! Glad to clear this up….” 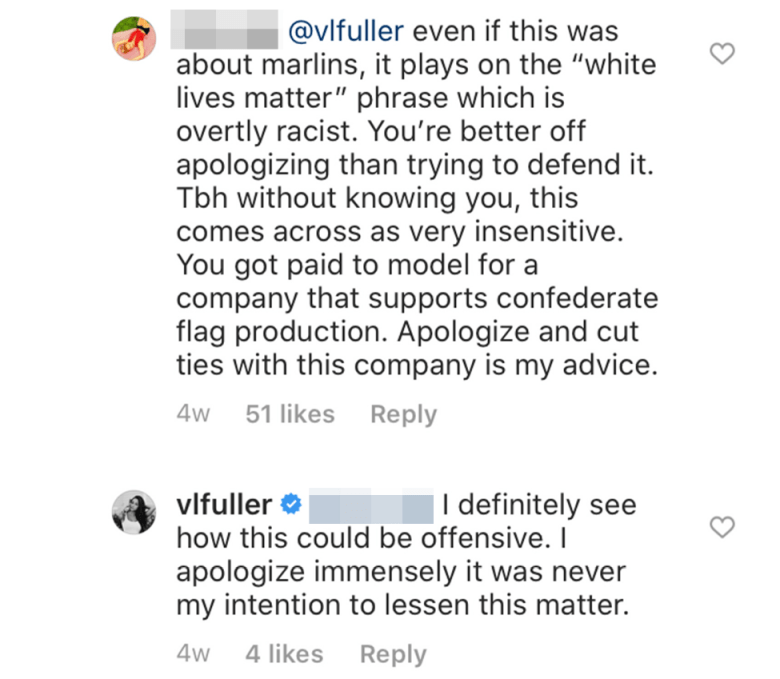 However, her (somewhat defensive) statement didn’t sit well with many users, who called the reality star out for trying to defend a brand that also sells confederate flag apparel, despite its marlin conservation efforts. She then added an apology to the post, writing, “I definitely see how this could be offensive. I apologize immensely it was never my intention to lessen this matter.”

Although Weber Condemned the White Lives Matter Campaign, He Remained Supportive of Fuller

Don’t let this picture fool you, we spilled our wine & he almost dropped me #youredoinggreatsweetie

Although Weber told People that he “in no way supports” the White Lives Matter campaign, the Bachelor star emphasized that he still supports Fuller and hopes that fans give her the benefit of the doubt.

“All I can speak on is the time I was able to spend with Victoria throughout this experience,” Weber said, according to People. “And I truly enjoyed my experience with her. I really feel like she’s a good person. She’s got a lot of endearing qualities.”

He added, “I just hope that people can form their opinion on her based on what they see between the two of us and her time on the show. She’s not perfect, I’m not perfect, no one’s perfect, but, yeah that’s all I can really say on that.”

Tune in Monday nights at 8 p.m. EST to catch new episodes of The Bachelor on ABC. In the meantime, don’t forget to check out this author’s profile for all of your reality TV coverage and entertainment news!

Read More
Reality TV, The Bachelor, TV
Peter Weber addressed the controversy surrounding "Bachelor" star Victoria Fuller and her involvement with what some believe was a "White Lives Matter" photoshoot.