Bachelor contestant Victoria Fuller has publicly apologized following a recent scandal involving a controversial photoshoot for what some thought was a “White Lives Matter” brand of clothing. Although the reality star explained that the brand WLM Apparel and Clothing stands for “We Love Marlins” and not “White Lives Matter,” she still issued an apology for the outrage caused by the photoshoot.

“I would like to sincerely apologize for my involvement with We Love Marlins,” Fuller shared on her Instagram Story on Saturday, February 15. “My intention was only to support an endangered species.”

Keep reading for details on Fuller’s involvement with the company, the controversial photoshoot that angered millions of fans, and her full statement of apology.

Fuller Was Seen Sporting a Blue Hat With The Letters ‘WLM’ 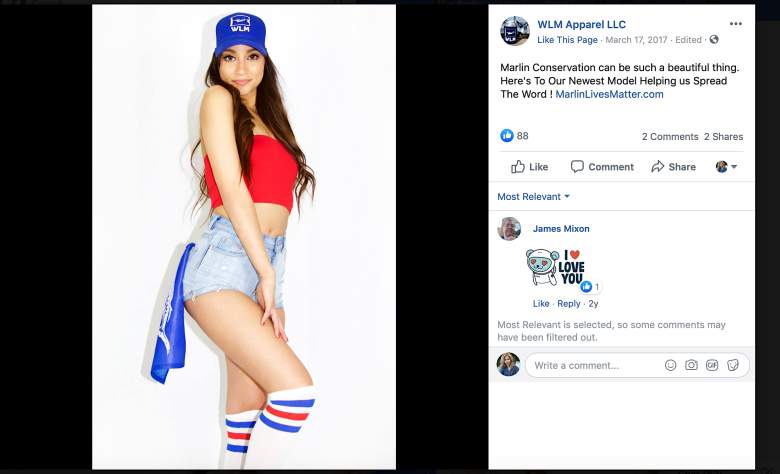 A photo of Fuller sporting a royal blue hat with the letters “WLM” was posted by the brand WLM Apparel and Clothing on Instagram shortly before the Season 24 premiere of The Bachelor. Fans initially thought WLM stood for “White Lives Matter,” and assumed Fuller was supporting the movement, considering WLM Apparel and Clothing also sold clothing item featuring the confederate flag emblem.

Once the photos surfaced, Fuller defended the company on Instagram, and tried to explain that the letters stood for “We Love Marlins,” and not “White Lives Matter.” She noted that the company was selling apparel to support the conservation of white and blue marlins, which are deemed “vulnerable” at this time.

“Hello bachelor clues followers!” she wrote on Instagram in response to angry comments on the post below. “It would be nice for you to gather all facts before jumping to bash someone. The company ‘We Love Marlins’ is in support of catching white, blue, and black marlins & releasing them back into the wild. In regards to a sensitive topic, I come from a VERY large fishing town where Marlin tournaments are held every year! Glad to clear this up….”

However, her (somewhat defensive) statement didn’t sit well with many users, who called the reality star out for trying to defend a brand that also sells confederate flag apparel, despite its marlin conservation efforts. She then added an apology to the post, writing, “I definitely see how this could be offensive. I apologize immensely it was never my intention to lessen this matter.”

Had such an amazing time last nite supporting a wonderful cause! 5th annual Beach Ball was one for the books ? #fightingcancerwithkindness #actsofkindness #cancercarefoundationoftidewater . . . . Dress is Likely-Miller Gown from @fashionpass

Fuller’s involvement in the WLM campaign didn’t initially gain widespread attention until last week, when Cosmopolitan pulled its digital cover featuring Fuller and Weber from it’s site. The reality star still hadn’t released an official statement (other than the comment above) until Saturday, February 15, when she took to Instagram to assure fans that she was not involved with the White Lives Matter movement in any way.

Her statement continued, “I want to say that I unequivocally reject the beliefs of the white lives matter movement or any propaganda that supports racism of any kind. I would like to specifically apologize to people of color that are affected by racism daily. It was never my intention to add fuel to the racial fire in this country.”

Fuller added, “This has truly been an educational moment for me and I hope to be a voice against racism moving forward. I hope I can be shown grace as I navigate through this process.”

Tune in Monday nights at 8 p.m. EST to catch new episodes of The Bachelor on ABC. In the meantime, don’t forget to check out this author’s profile for all of your reality TV coverage and entertainment news!

READ NEXT: Victoria Fuller Spoilers on ‘The Bachelor’: What Happens Tonight?

Read More
Reality TV, The Bachelor, TV
Victoria Fuller issued an apology for her involvement in what some believed to be a "White Lives Matter" photoshoot. Click here to read her statement.