TLC/YouTube Tommy Johnson was 614 pounds and on his way to an early death when he decided to seek out the help of Dr. Younan Nowzaradan and regain control of his life.

Tommy Johnson, a 38-year-old native of Louisiana, is the subject of tonight’s Season 8 episode of My 600 Lb Life., which airs Wednesday, March 11, 2020 at 8 p.m. EST/7 p.m. CST on TLC. Tommy tipped the scales at 641 pounds when he decided to seek out the help of celebrity bariatric surgeon Dr. Younan Nowzaradan to help him shed some weight and regain control of his life.

The TLC description of Season 8 Episode 11, titled “Tommy’s Story,” reads, “Tommy wants to lose weight so he can marry his fiancee and have the life he always dreamed of with her, but to break the cycle of pathological eating that left him nearly bed-bound, he’ll have to face a piece of his past he has always kept secret.”

Here’s what we know about the reality star and his journey, based on the promos for tonight’s episode. (Warning: some spoilers on Tommy’s journey ahead! Turn back now if you don’t want anything ruined for you before the episode airs!)

Five years ago, Tommy promised to take his fiance Amanda out on a real date…but she's still waiting. #My600lbLife pic.twitter.com/6QzLtW2YfK

In the clip above, Tommy notes that his weight has kept him primarily confined to his bed, so he doesn’t “do anything or see anyone.” Tommy tells the cameras that he loves his fiance Amanda with all his heart, and he wants to “give her so much more than this, than what I am.”

The reality star continues, “A couple years ago, I proposed to her and I committed to her to lose the weight, so I can give her a proper wedding. She wants to be able to walk down the aisle … but that was years ago I made that commitment to her and I still haven’t fulfilled it.” He adds, “I feel like a burden, I don’t feel like a man. I haven’t even ever taken her on a real date.”

When the two first got together, he asked her what she wished she could do with him, and she responded that she loves singing and would like to do karaoke with Tommy. He sadly admits that he still hasn’t been able to do that one simple thing with her, so he’s hoping that everything will change in the coming months when he starts his weight loss journey with Dr. Now.

“We can’t even be intimate with the way I am right now,” Tommy tells the producers. “Not being able to sleep in the same bed as my fiance, it’s just another one of those things that makes you feel kind of useless, so I know I have to change.” He continues, “She is losing patience with me. I have this constant fear that she is going to leave me. Everyday, just wondering when enough’s going to be enough.”

According to the clip above, Tommy’s fiancee Amanda has a history of dating morbidly obese men, and her ex died after his heart failed due to complications with his weight. “I was engaged before to someone who was also morbidly obese,” Amanda tells the cameras. “He was over 700 pounds, and he was just a wonderful, wonderful man.”

She notes that she “lost [her ex] to obesity,” so it’s clear Amanda already has experience with the issues (and fate) that Tommy is facing. She says that when she and Tommy started dating, and his weight started spiraling even more out control, she started to worry that she was going to go through the same pain and loss again.

“It took me a little time to find out that her ex passed away about two months before we started talking,” Tommy says in the clip. “As we talked and got closer over the next year, and she started to recover from losing her ex, we got together and I moved in with her. And since then, we’ve been together, but I’ve never felt like I’ve been able to be the boyfriend Amanda really deserves. The more my body breaks down, the harder I make it for her.”

Although it appears Amanda might enable Tommy’s obesity to some extent, the reality star had already been dealing with weight issues since he was a young boy. He explains early in the episode that he started turning to food to cope with the death of his father, who died from a heart attack when Tommy was just was 8-years-old; by the time he was 10, Tommy weighed 200 pounds.

Tommy Gets Approved For His Surgery & Loses 218 Pounds During His Weight Loss Journey With Dr. Now 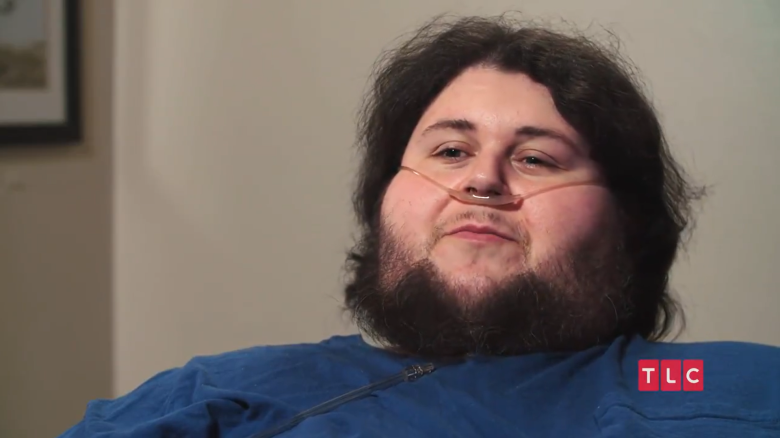 Tommy Johnson is the subject of tonight’s episode of “My 600 Lb Life.”

Throughout his weight loss journey, Tommy works incredibly hard to lose the weigh he needs to get approved for his sleeve surgery. He was 641 pounds when he arrived in Texas and started working with Dr. Now; by the time he weighed in for his second checkup, Tommy was down 70 pounds and was approved for the surgery.

The reality star still faced some ups and downs throughout the year he spent in Texas working on Dr. Now’s program. Tommy had issues losing the 20 pounds per week Dr. Now required him to lose to remain in the program, so the doctor encouraged him to see a therapist to help him work through some of the trauma that led to his weight gain in the first place.

Tommy ultimately loses a total of 218 pounds after working closely with Dr. Now for a full year. The episode ends on a heartwarming note, with Tommy taking Amanda out on their first date in years! The reality star was even able to drive her to their date, as he was once again able to fit behind the steering wheel of his vehicle, so he appears to be well on his way to giving Amanda her dream wedding.

Tommy’s success story is a breath of fresh air after several episodes of failed weight loss attempts, and we hope to see more happy endings in the coming weeks. Tune in Wednesday nights at 8 p.m. EST/7 p.m. CST on TLC to catch new episodes of My 600 Lb Life. In the meantime, don’t forget to check out this author’s profile for all of your reality TV coverage and entertainment news!

Read More
My 600 lb Life, Reality TV, TV
Tommy Johnson was 614 pounds and on his way to an early death when he decided to seek out the help of Dr. Younan Nowzaradan and regain control of his life. Click here for spoilers on Tommy's weight loss journey.