Tom Brooks, star of the hit reality series 90 Day Fiancé: Before the 90 Days, issued an apology on Instagram following the April 5 episode of the show, which featured Tom making a comment about ex-girlfriend Darcey Silva‘s weight.

Fans took to social media to express their disgust at his comment, which came in the middle of a breakup while the two were out having coffee in New York. As Darcey was waiting to pay the bill, Tom asked her (seemingly out of the blue) if she “put weight on,” and when Darcey asked him to repeat himself, he remained quiet.

Tom wrote on Instagram that he’s “not perfect,” adding that we “all make mistakes.” He appeared to blame TLC’s editing for the comment, although he also claimed to take “full responsibility” for what he said. Keep reading for details:

Tom and Darcey got into a heated argument during the April 5 episode of Before the 90 Days after Darcey confronted Tom about his “other” girlfriend. Although Tom admitted that he “found someone who loved him the way he needed to be loved,” he quickly turned the conversation around on Darcey and essentially accused her of pushing him into the arms of another woman.

“You know something? You had everything of me in your hands and you didn’t see it,” he said during last night’s episode. He then claimed it was difficult for him to listen to Darcey’s heartbreak over ex-boyfriend Jesse Meester, and admitted that he didn’t love Darcey the way Jesse did. “I wish I could have loved you the way he did, because your idea and notion of love is not me.”

Darcey told Tom that she wasn’t okay with him being with another woman, and said she wanted a clean break. “Yeah I don’t want to be friends, I’m sorry I think we’re gonna walk away completely. Fresh start for myself, for my family, for my friends, and it’s gonna be that way and it’s gonna stay that way.” She added, “Move on with your life, I don’t want anything to do with you.”

Darcey continued, “You are nothing to me right now,” to which Tom replied, “I’m glad. And try not to ruin the next one,” referring to her next relationship. Then, as Darcey was getting ready to pay the bill, Tom randomly asked if she “put weight on.” (You can check it out at the 1:13 mark in the clip above). When she asked him to repeat himself, he remained quiet, so she left the restaurant. “Enjoy your life,” she said to Tom on her way out, who responded, “I will, now you’re not in it,”

Tom Blamed TLC’s Editing for How the Comment Appeared 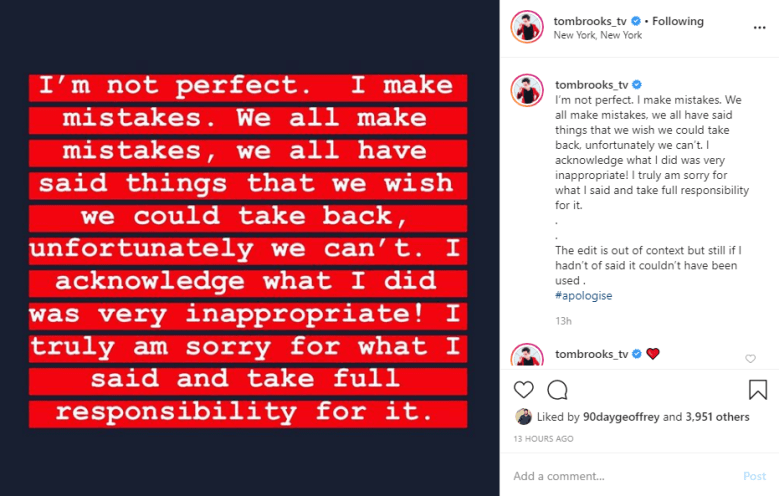 Tom issued an apology on his Instagram page following the April 5 episode, and while he claimed to to take “full responsibility” for the comment, he also blamed TLC’s editing at the very end of the apology.

“I’m not perfect. I make mistakes,” the reality star wrote on Instagram. “We all make mistakes, we all have said things that we wish we could take back, unfortunately we can’t. I acknowledge what I did was very inappropriate! I truly am sorry for what I said and take full responsibility for it.” He then added, “The edit is out of context but still if I hadn’t of said it couldn’t have been used,” followed by #apologise.

Darcey also shared her thoughts on Instagram following the episode, posting a selfie with the caption, “Yes!!! I got this! SILVA Strong always and forever in my Hof11 Army jacket! I won in my heart! This is not a war it’s love! No one can break me anymore!”

READ NEXT: Darcey & Tom 90 Day Fiancé Update: Are They Still Together?