Doc Antle, born Mahamayavi Bhagavan Antle, is the South Carolina-based founder and director of The Institute for Greatly Endangered and Rare Species (T.I.G.E.R.S.), a wildlife preserve for exotic animals located in Myrtle Beach.

The 60-year-old was born with the Hindu name and told the Miami Herald how he bonded with the hundreds of animals on his family’s ranch. In an article with the Macon Chronicle-Herald, he told reporters that he obtained a Ph.D. in zoology from the British College of Natural Science that he got after high school.

Antle told the Herald how he raised his first tiger cub in 1982, after borrowing it for a presentation. That cub would go on to be featured in an Exxon commercial, kicking off a career with big cats that has lasted for decades. Antle has been prominently featured on the new Netflix series, The Tiger King.

1. He Runs a 50-Acre Wildlife Preserve

According to his Myrtle Beach Safari’s webpage, he founded T.I.G.E.R.S. in 1983 to promote “global conservation education through entertaining and interactive programs.” Those interested in visiting have the option to play with lion cubs, swim with an elephant and have other close encounters with exotic animals after for a fee.

There are nearly 200 animals on the preserve, which include a cheetah named Ramses; a 9,000-pound, 34-year-old African elephant named Bubbles; and 11-foot tall liger named Hercules. The site also features Siberian and Bengal tigers, chimpanzees, gibbons and African fish eagle.

He also founded the Rare Species Fund in 1983. His website states that he has several projects that the fund has supported in Uganda, Kenya, Indonesia, India, Brazil, Chile and other countries. The projects are described as being for the development and support of wildlife policies, research, education and conservation.

Countless celebrities have been photographed at the safari and/or with his animals, including football player Ndamugkong Suh, celebrity chef Bobby Flay and professional boxer Floyd Mayweather. His website states that despite the coronavirus pandemic, the safari is still open with limited availability for “small tours.” It had closed temporarily Apr. 1, but states that tours can be held as long as guests follow Centers for Disease Control and Prevention safety guidelines. Tours start at $339 per person and options include “wild encounters,” “African Safari” and weddings.

2. He Was Featured on the Popular Netflix Documentary Series, ‘Tiger King‘

Doc Antle was featured in the show as one of the sources of inspiration and mentorship for Joe Exotic, the subject of the Netflix series Tiger King and the former operator of his own wildlife preserve. During the show, Antle was credited as one of the pioneers of providing interactive experiences with lions, tigers and other big cats. However, many questions were raised about Doc Antle’s private lifestyle and the way he operated his wildlife preserve.

One of his biggest critics featured in the film was a former trainer at his facility named Barbara Fisher, who said she worked there from 1999-2007.

So…Bhagavan has been saying I was never anything but a part-time babysitter. I’ve been saying I raised cubs and did photos all day every day for years…here’s a photo someone took with my wrist and tattoo in it. https://t.co/7DvMPhlL93

In an article she wrote for the Iowa Examiner, Fisher described a cult-like atmosphere where the female trainers competed for Antle’s attention, worked every day of the week from 8 a.m. to midnight and made the equivalent of $100 per week.

In an interview with Elle magazine, Fisher said, “I hope the takeaway from Tiger King is that this is an unregulated world where people can get away with anything they want to.”

In an interview with Cosmopolitan magazine, Antle disputed any claims of abuse, running a cult or underpaying the trainers. He admitted that he had multiple girlfriends who all knew each other, but denied having a “harem,” which was suggested in the series. Mirror reported that Antle sleeps with guns nearby due to the death threats he said he received after the show aired. In a Facebook post, he also said he was disappointed about how he was portrayed in the Netflix series.

During his operation of the preserve, South Carolina law enforcement served Antle with a warrant to take DNA swabs from his lions in Dec. of 2019, according to WMBF News, a local South Carolina TV station. Antle said it was animal rights, anti-zoo driven. TMZ reported that Antle is under federal investigation for his treatment of endangered species in their episode, “TMZ Investigates: Tiger King – What Really Went Down?”

There is also a petition circulating to “investigate Doc Antle for animal abuse.” People for the Ethical Treatment of Animals (PETA) has accused Antle of exploiting his animals and helping mainstream the tiger cub-petting industry, which the organization described as cruel and dangerous. Antle has denied these allegations.

3. His First Wife Died in a Tragic Car Accident 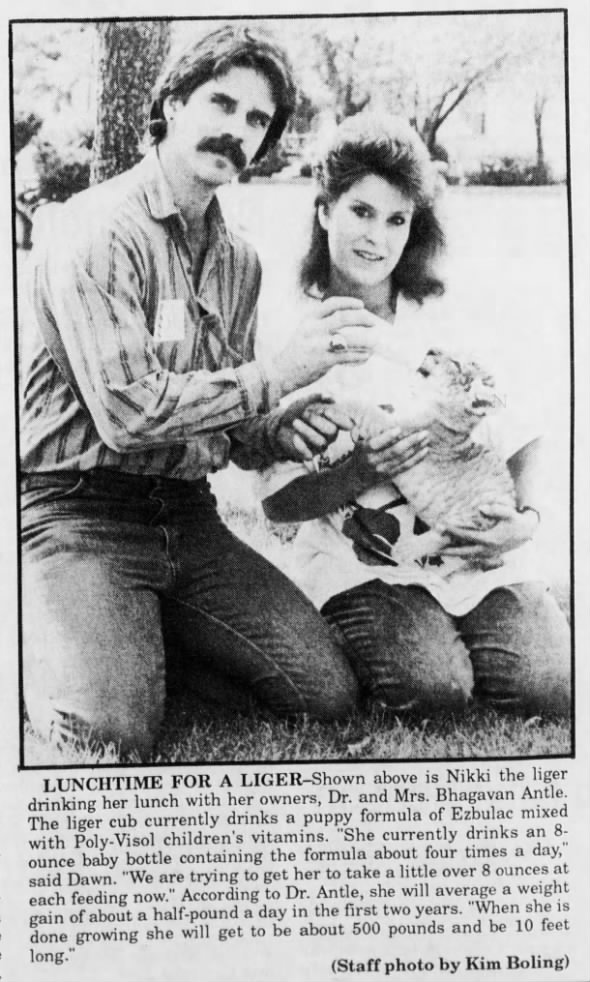 It’s unclear when or how they met, but Thurston and Antle were featured together in a 1989 article from the Macon Chronicle-Herald and referred to as Mrs. Bhagavan Antle. The couple was visiting Macon, Missouri to buy new animals at the Lolli Brothers Exotic Animal and Bird Sale to bring back to the old T.I.G.E.R.S. location in Buckingham, Virginia. In the article, she talked about helping to train many of his animals, such as a 48-day-old liter, Nikki.

“Nikki sucks on my finger to go to sleep,” she was quoted as saying. “She was up until 2 this morning.”

She was also involved with some of the animals that are still on the preserve; a 1995 photo of her riding Bubbles, the elephant, with Antle was printed in The Observer, a Virginia paper. Bhagavan Antle and Dawn Thurston Sat, Feb 25, 1995 – 19 · The Charlotte Observer (Charlotte, North Carolina) · Newspapers.com
On August 13, 1997, his wife, Dawn Marie Thurston, died at the age of 29 in an car accident, according to a death notice in The Observer, a paper out of Charlottesville, Virginia. She is the mother of Antle’s two children, Kody and Tawny Antle.

4. His Children, Kody and Tawny, Have Their Own Followings

My sister @tawny.thetiger It’s a family thing! 35 years of animal conservation and education ???It is our goal to bring wildlife into the hearts and minds of all people ???


Kody Antle has built his own public profile as the “real-life Tarzan.”

? Make You Mine - PUBLIC


The 30-year-old often promotes the wildlife preserve on his very popular social media sites; 2 million people follow his Instagram page and 13.4 million follow him on TikTok.
In a video interview with In The Know, Kody described himself as being lucky to be born into the world of exotic animals. “I had tigers as my big sisters and brothers and I had an elephant as my big sister growing up. It’s just been a whole life filled with animals.”

His sister, Tawny Sky Antle, calls herself an Animal Mama, Tawny the Tiger and Queen of the Jungle on her Instagram page. She also has a social media following of 186,000 subscribers on her YouTube channel and nearly 100,000 on Instagram.

In an Instagram Q&A, she said that she has been to 17 countries, her favorite animals are great apes and she wears the baby tooth of the first tiger she raised on a necklace.

More #siblingday pics, some old, some new(ish), because why not. Miss and love you all @tila.kam @tawnyantle @kodyantle and Derek

She also told fans, “Behind the scenes, I am not just an animal lover, but I’m an animal lover through and through. I am extremely passionate about wildlife conservation, am a vegetarian and get my hands dirty every day. This is my life, not a job.”

Even though they both grew up on a 50-acre preserve surrounded by wildlife, they also formed close bonds with other children as seen in these Instagram photos featuring Kody, Tawny and Sri Devi. In the photos, Sri Devi tags them for #siblingsday and uses the last name Antle on her Instagram page.

Sri Devi Antle desrcibes herself as an aerialist and dancer who often performs in themed shows. She also occasionally poses with baby tigers.

5. His Animals Have Been Featured in Several Shows, Movies and Films

Antle’s lion, Arthur, is the giant seen roaring between the MGM logo at the beginning of the company’s movies. Antle’s tiger was also featured in the “Tiger in Your Tank” Exxon ads of the 1990s, according to the Charlotte Observer. The article also mentioned movies featuring either Antle’s animals or his expertise as an animal handler, such as Dr. Doolittle, Jungle Book, Ace Ventura: Pet Detective and Wild America.

He was also Jack Hanna’s assistant at one point, and he can be seen bringing in a black panther out during The Tonight Show with David Letterman and working as the big cat’s handler. In 2001, he went on the Tonight Show and Jay Leno and he has appeared on television with his animals several times ever since, including on Howie Mandel’s show, Good Morning America and the Today Show.

Perhaps most famously, his tigers were used as part of Britney Spears’ Video Music Awards performance of “I’m a Slave 4 U.”

In a Rolling Stone video, Antle also discussed his animal’s performances in other music videos, such as Nas’ “Hate Me Now,” Janet Jackson’s “Together Again” and Ashanti’s “Rock Wit U.”