Getty Mama June, whose real name is June Shannon, stars on the hit reality series "Mama June: From Not to Hot."

Mama June, star of the hit reality series Mama June: From Not to Hot, has been involved in several controversial scandals over the last few years, including a drug arrest for possession of crack cocaine. Mama June’s downward spiral into drug addiction has been extensively covered on the current season of Mama June, including June’s estrangement from her family and her daughters’ numerous attempts to help her get clean.

So what’s going on with Mama June today? Did she finally kick her drug habit and get her life back on track, or is she still using? Promos for the June 12 episode of Mama June show the reality star taking a drug test while her daughter Lauryn “Pumpkin” Efird helps her in the bathroom, but another clip shows June sobbing, so the results could go either way – are they tears of happiness or shame?

The description for Friday’s episode, titled “Face Off With Mama,” reads, “Mama and Pumpkin face off in a dramatic and scary sit down, but neither are prepared for the results of Mama’s drug test. Alana discovers a secret the family has been hiding from her.”

While it’s unclear at this time if June is clean or still using today, we’ve got some thoughts on her sobriety. Keep reading for details: 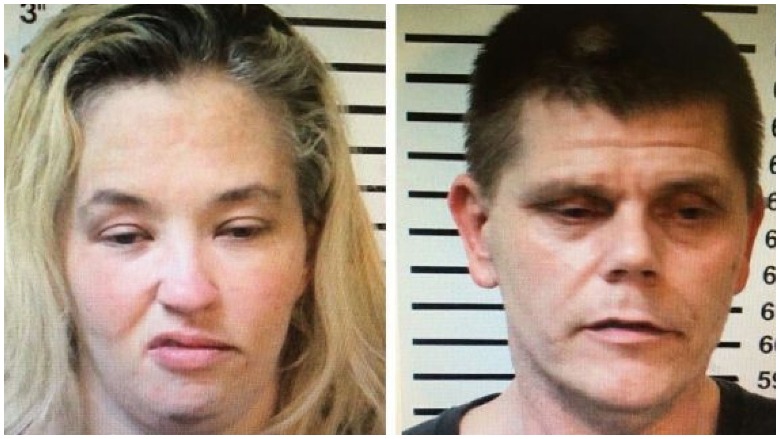 June’s drug problem began spiraling out of control after she started dating her current boyfriend Geno Doak, who was arrested alongside June after the two were found with a pill bottle full of crack cocaine, several needles and a glass pipe outside of an Alabama gas station. The police were called after the reality stars got into a heated altercation and both stars were arrested for possession of a controlled substance and drug paraphernalia.

June and Doak pleaded “not guilty” to the charges in October 2019, according to People. The State of Alabama had a grand jury review the evidence in Mama June’s case, according to The Blast, which published the indictment. It states that Mama June “did unlawfully possess a controlled substance-to-wit: Cocaine, in violation of” the law and “did unlawfully possess with intent to use in inject, ingest, inhale or otherwise introduce into the human body, drug paraphernalia, to-wit: a pipe.”

The reality star admitted in January that she and her children had not been on speaking terms for some time, after several failed attempts to get June to rehab put an even deeper strain on their relationship. It’s unclear at this time if June and her children have repaired their relationship; however, both Pumpkin and Honey Boo Boo (aka Alana Thompson) still follow the reality star on Instagram, so even if they haven’t fully resolved their issues, it looks like they are at least on friendly terms for the time being.

#ad A little progress goes a long way and @boombod’s shot program always helps get me back into my routine. Summer’s so close and I’m making sure to get ready for it, need to keep the fitness goals this year 💪 Anyone else check out their BOGO free sale yet?

It’s unclear at this time if June is totally clean today, and viewers likely won’t find out until after Friday’s episode of the show, when the results of her drug test come back. Contractual obligations to the network stops the reality star from announcing too much about her life until the current season of the show wraps up, so fans will most likely have to wait until June can make an official statement about her sobriety.

However, June has been focusing on her health and fitness in recent months and both her and Doak claim they are employed now, so it looks like she’s attempting to straighten out her life. She’s been posting several weight loss pictures on Instagram over the last few weeks and she recently announced that she was working for an airport luggage delivery service.

According to People, June said of hers and Doak’s new job, “Yeah, we’ve been doing work today. We worked for a little bit today. It’s called real life.” People also reports that a source close to June told the outlet that she “really wants to get it together, most importantly for her girls,” so we’re hoping that June’s drug test comes back negative during Friday’s episode.

New episodes of Mama June: Family Crisis air on Friday nights at 9 p.m. ET on WE tv. In the meantime, you can find all the latest in TV coverage and entertainment news here.