Rick Kirkham is known for being the TV producer behind the planned reality show Tiger King and former Inside Edition reporter and daredevil. In the Netflix docuseries, “Tiger King,” Kirkham said he was eventually fired from being the producer of the planned Tiger King reality show and much of Kirkham’s footage was lost in a fire.

He started out in broadcast TV in Las Vegas and became “the most-awarded crime beat reporter in the city’s history” at the age of 27, according to ABC News.

His life has been a roller coaster professionally and personally, as he became known as a thrill-seeking reporter on Inside Edition and then went on to inspire a documentary about the dangers of addiction.

Kirkham is featured in the final installment of Investigation Discovery’s Nine at 9 Series. Here’s what you need to know:

1. Kirkham Started Filming At the Age of 14 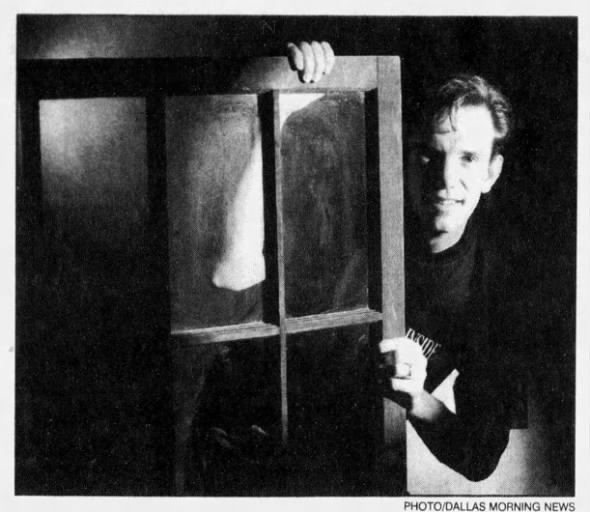 Oxygen reported that Kirkham started recording his daily life when he was 14 years old. His LinkedIn profile says that he earned a degree in broadcast journalism from the University of Central Oklahoma in 1981.

Soon after, Kirkham became a crime reported in local Las Vegas NBC station, Oxygen reported. Seven years later, he jumped at the chance to become a senior reporter and video producer for the TV show Inside Edition, where he worked at producing the “Inside Adventures” series until 1996. Kirkham became so well-known for doing crazy stunts that conservative TV personality Bill O’ Reilly called Kirkham “nuts.”

Kirkham’s LinkedIn page also lists him as a producer of TV and film for RealReels from 1999 to the present and he worked less than a year as a news director at KFBB TV.

His next big project was Tiger King.

2. Kirkham Was Known To Do Crazy Stunts As A Reporter

GettyRick Kirkham prepares for a 1994 bout against Danny Bonaduce.

Kirkham said he started out wanting to be the next Dan Rather, according to a 1994 article from The Orlando Sentinel, but he said he eventually wanted more than a daily grind. When his salary jumped from $28,000 to $119,000 a year, he could afford to make his lifestyle more exciting, according to ABC News.

According to the Orlando Sentinel, Kirkham’s wild streak started in second grade, when he would jump out of second-story windows to entertain his friends.

As the anchor of Inside Edition, Kirkham was able to interview cultural icons such as James Brown, Chuck Norris and even then-president George H. W. Bush (which he supposedly did high), Men’s Health reported. However, he still struggled even while at Inside Edition from “the pressures of turning out two to three stories a week” that led him feeling “drained and deadened,” The Orlando Sentinel reported. The opportunity for a new segment called Inside Adventure came and Kirkham didn’t look back.

Kirkham drag-raced, wrestled an alligator, ran with the bulls in Spin, bobsledded and became a human torch, The Orlando Sentinel reported. At the age of 36, he took on a charity boxing match against Danny Bonaduce, a member of the Partridge Family cast; he lost.

“I was secretly developing a death wish and taking more and more risks … It was kind of a joke with one of my producers that I would go out in a blaze of glory and the world would see it,” he told ABC News.

Eventually, producers discovered that the drug problem Kirkham developed at the age of 19 after his half-brother taught him to inject cocaine was causing him to spiral and he was fired from Inside Edition, ABC News reported.

Shortly after college, Kirkham began using cocaine, Men’s Health magazine reported. Kirkham checked in to rehab soon after his wedding as Inside Edition producers told him he needed to get help, according to the magazine. However, it took him nearly 20 years to quit the drug.

Later on, speaking before a group of youth, he explained, “Bad thing about drugs is they start out kind of fun, an escape, an opportunity,” he said.

However, Kirkham said the addiction cost him dearly.

“I lost my career in television. I lost my health, I lost my home and all my possessions and within a year, I lost my wife and two sons,” he said in a speech to students.

“I hated myself, absolutely loathed myself — could not look at myself in the mirror,” he told Oprah in an interview with her.

At one point, Kirkham tried to commit suicide drinking two beers, swallowing 100 pills before getting behind the wheel of his Jeep and rolling it, ABC News reported.

Kirkham sobered up in 2006, according to Men’s Health. and once he got clean, he began trying to educate other young people about the dangers of drugs. “While I was rich in many ways and famous during the day, at night, I was a hardcore crack cocaine addict for more than a decade,” he said during one of his speeches encouraging youth to avoid drugs. He was also featured in a documentary called the “Faces of Addiction Anti Drug Program.”

Three thousand hours of his life story was condensed into a 91-minute educational documentary, “TV Junkie,” that won a Sundance Film Festival award in 2006.

Kirkham said he witnessed the worst of Joe Exotic, including the drugging of employees.
“I saw Joe giving animal drugs to the humans working there,” Kirkham said, according to Mirror:

When they’d get a cough or a cold, he’d go grab ketamine, and animal tranquilizer, and shoot them up with that. I realized everyone who worked at the zoo was some kind of misfit

This woman came in begging him to take care of her horse, which she could not afford. Joe cried and said ‘of course.’ When she drove off, he pulled the gun out and shot the horse dead in the trailer, had guys chainsaw it into pieces and fed the lions with it.

Kirkham also told Mirror that Exotic was scared of most of his animals and only handled older or sedated ones.

During the docuseries, Kirkham said that after a fire engulfed the zoo studio in March of 2015, he was devastated: “I dropped to my knees and I cried. I cried because all of our footage was in that studio and I hadn’t backed up anything outside the studio.”

Kirkham said he immediately left the zoo of exotic animals and had a nervous breakdown. Kirkham has denied taking any part of burning the studio down, calling it his “retirement money” during the docuseries.

5. Kirkham Said The Fame of ‘Tiger King’ Has Followed Him Around the World

According to Kirkham’s Facebook, he works as a freelance reporter and lives in Norway with his new wife, Kristin E Rosøy Kirkham.

However, he said the show is not limited to North American borders and a photo of his picture in the local paper results in what he described as “Tiger King” comments, according to Oxygen. He said he wouldn’t take the opportunity to do the show again, despite its potential popularity, because it drew him into an unhealthy world.

“I regret ever meeting Joe Exotic because I saw there was a great opportunity for an incredibly wonderful show about big animals and this crazy zookeeper but I too was sucked into the surreal world of Joe Exotic,” he told Oxygen.

Now working on his own projects and still filming, he takes fishing trips with his wife and even recorded her first time in the U.S. as a visitor in New York. However, he did tell CNET that he was writing a memoir.

READ NEXT: Doc Antle: Where the Tiger King Character Is Now