Instagram Stephanie Matto admitted that she used to strip while living in Los Angeles,

Stephanie Matto, star of the hit reality series 90 Day Fiancé: Before the 90 Days, admits during Sunday’s “Couples Tell All” special that she was a stripper when she was 24 and living alone in Los Angeles.

Stephanie also explained during a lengthy Instagram post why she turned to dancing at the time, and how it changed her as a person, and she hasn’t been shy about sharing her experiences in the industry on her YouTube channel. Keep reading for details ahead of the crazy Tell All event:

STRIPPER CONFESSIONSGet exclusive content you can't get here by supporting me on Patreon! patreon.com/stepanka Want to read my book or my blog? stepankamatto.com There you will have access to my merch, my book, and more! Check out my DEBUT book “Mean Boys & Memories” It’s now available on Amazon, Kindle, and Createspace. For a print copy…2017-02-01T21:04:06Z

During the June 7 “Couples Tell All” segment of the show, host Shaun Robinson asks Stephanie about her experiences as a dancer; the reality star explains that she was indeed a stripper, and her experiences dancing shaped the way she views sex and intimacy. She also notes that being a stripper led to the conservative demeanor she presented while she was dating Erika.

“When I was in my early 20s, I moved to Los Angeles and I was broke and I didn’t have anybody to turn to, and so I did end up dancing for a period of time, and it messes you up,” she explains during Sunday’s Tell All special. “So after I stopped working there it definitely changed the way that I am.”

She added that she thought Erika had watched more of her videos than she had, and she didn’t think Erika was going to be so surprised about her sexuality and issues with intimacy. “I thought that she knew some of these things about me that were a little bit shocking to her when I came out there. And so when I got there and I was expected to jump right in head first, I was like ‘wait, hold on, we still gotta get to know each other.” 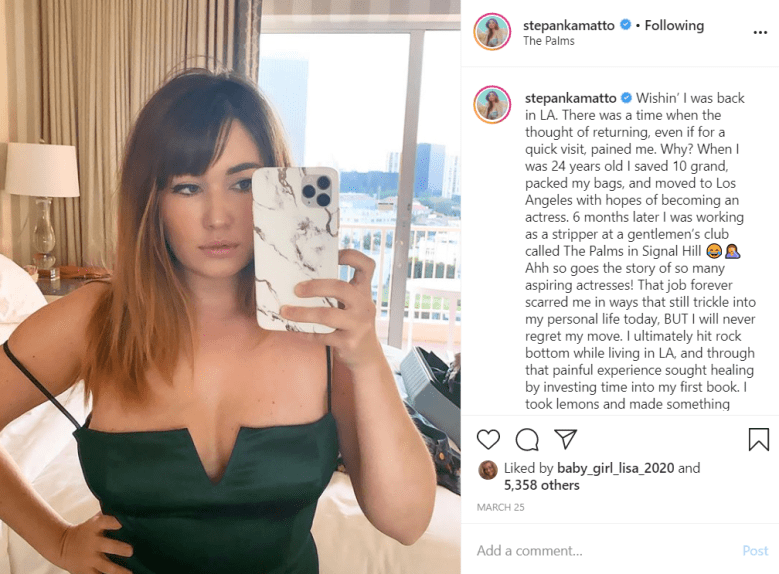 Stephanie explained in more detail on March 25 why she turned to dancing when she lived in Los Angeles, and how it “scarred her for life.” The reality star wrote, “When I was 24 years old I saved 10 grand, packed my bags, and moved to Los Angeles with hopes of becoming an actress. 6 months later I was working as a stripper at a gentlemen’s club called The Palms in Signal Hill.”

She continued, “That job forever scarred me in ways that still trickle into my personal life today, BUT I will never regret my move. I ultimately hit rock bottom while living in LA, and through that painful experience sought healing by investing time into my first book. I took lemons and made something closely resembling lemonade. I have always been a risk taker. I have always lived life on the edge, and although my illness has slowed me down the past few years, I still like to think there is that crazy spontaneity left in me.”

Read More
90 Day Fiance, Reality TV, TV
Stephanie Matto, star of the hit reality series "90 Day Fiancé: Before the 90 Days," admits during Sunday's Couples Tell All special that she used to be a stripper.