Instagram Deavan and Jihoon, stars of the hit reality series "90 Day Fiancé: The Other Way."

Deavan and Jihoon, stars of the hit reality series 90 Day Fiancé: The Other Way, have been at odds over their financial situation since Deavan returned to Korea. After Jihoon lied to his wife about being financially stable enough for her to move back overseas, Deavan’s been considering leaving Jihoon, going back to the U.S. with her mother and taking the kids with her.

Money has been a source of contention between Deavan and her husband in past seasons of the show, with the reality star questioning Jihoon’s ability to support their family. With Jihoon’s inconsistent employment record, his mounting debt and very little money to care for the children, fans might be wondering how much cash the 90 Day stars actually take in if they’re struggling so badly to stay afloat. What do they do for work? What is their gross yearly income?

According to Stars Offline, Deavan Clegg has a net worth of $350,000 as of early 2020, although that number is likely growing every day, considering Deavan is also a model, runs a successful YouTube channel, and works with Cameo on the side. Meanwhile, Jihoon works part-time as a delivery man. Keep reading for details on Deavan and Jihoon’s net worth and income:

Deavan is a Model & Used to Work as a Professional Makeup Artist, While Jihoon Works Part-Time as a Delivery Man

Prior to breaking into reality television, Deavan worked as a professional horror makeup artist, and she also does some modeling on the side. The 90 Day star frequently uploads photos of her modeling gigs and boudoir shoots to her Instagram page, which often feature a scantily-clad Deavan posing in lingerie.

Meanwhile, Jihoon was working part-time as a delivery man on the show, although it’s unclear at this time if he has a different job today. In the clip below, Jihoon says he brings home between $2,000 to $3,000 per month, which doesn’t sit well with his wife. He admits that he doesn’t have any “marketable skills” because he never furthered his education, and that he wanted to take a part-time position so he could nap more often.

Deavan then asks him why he isn’t working full-time when he knows he has kids to take care of, saying, “I was very tired yet I was working 17 hours while taking care of the kids.” She adds during a confessional that she’s “shocked” right now. “For me to put in that time to make sure my family was okay, while he took a part-time job so he could take more naps, is ridiculous.”

The two have already been struggling to make ends meet since Deavan arrived back in Korea with her two children, and when Jihoon confessed to Deavan that he lied about being more prepared for their arrival, she said she felt “tricked” by her own husband.

“Jihoon admitting that he’s not financially ready for us to come to Korea is devastating because he told me everything was fine,” Deavan says in the promo above. “But he lied to trick me into coming, and that’s not okay.” She also adds that she gave up a good job to come back to Korea, so she is frustrated and starting to question her future in Jihoon.

Jihoon admitted during the first season of The Other Way that he was already struggling with money when he first met Deavan. The reality star told the cameras that his “financial situation is very not good” because he got himself into credit card debt at a young age.

The 90 Day star also lost his job during the first season of the show, which was the final straw with Deavan toward the end of the season. Deavan packed up and moved back to the U.S. with her children, and although she and Jihoon were still together at the time, she told her husband that he had a lot of things to straighten out before she would come back, including getting a real, legal job and moving out of his parents house.

They have been facing similar issues during Season 2 of the show since Jihoon did almost nothing that Deavan asked him to do before she moved back. Because Jihoon was still living with his parents, Deavan took it upon herself to rent an apartment for the first month she was back, although she was frustrated with her husband for not stepping up and finding a place himself.

“He’s supposed to be a husband and a father but he can’t even look at an apartment for us,” Deavan says in the clip above. “It just feels like I’m doing all the heavy lifting in this relationship and he has not done anything so far.”

The 90 Day Cast Makes Approximately $1,000 Per Episode of the Show 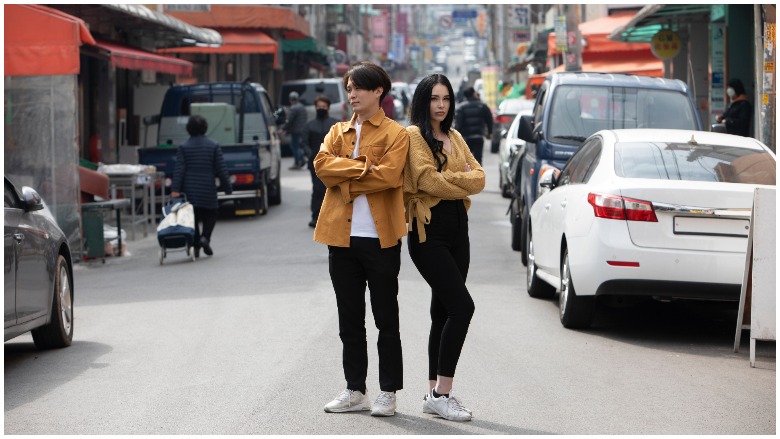 The cast of 90 Day Fiancé reportedly makes significantly less money than other popular reality stars featured on shows like MTV’s Teen Mom and Bravo’s Real Housewives. Most of them make as little as $15,000 per season (give or take, depending on how many episodes they are featured in), according to Cheat Sheet. In comparison, the reality stars on Teen Mom and Real Housewives earn six-figure paychecks ranging from $300,000 per season to $800,000 and up.

Nikki Cooper, a friend of David Toborowsky who appeared on 90 Day Fiancé Season 5, revealed that many cast members only get paid $1,000 per episode, although that number varies since some of the cast have recurring roles in other seasons. They also get an added bonus of $2,500 to appear in the “Couples Tell All” finale at the end of the season.

Unfortunately, the paycheck usually only goes to the American star featured on the show if the immigrant spouse hasn’t received their work permit, so some of the 90 Day reality stars don’t get paid at all. However, it’s worth noting that those numbers may have increased over the years due to the rising popularity of the show, but likely not by much.