Angela Deem revealed to her fans the reason she flashed her breasts on the “90 Day Fiancé: Tell All” episodes earlier this year.

Deem appeared at on an episode of “90 Day Bares All” on Sunday evening where she was asked by host Shaun Robinson about the viral moments, which aired in August.

“I was tired, I flew straight … and I was advised not to fly, you know, ’cause it’s dangerous, but you know me, I’m always doing something on the edge,” she told Robinson (h/t ETOnline). “I did it, and then we stayed out a little bit too late and I couldn’t sleep, and then I started hurting and took a pain pill, and I had, like, 30 minutes of sleep.”

Deem claims it was the pain medication she was taking following her breast reduction and weight loss surgery which was a big storyline for her this year.

Her behavior ranged from loud ranting, storming off the stage multiple times and flashing her breasts to the camera which was largely in in response to her husband Michael’s aunt Lydia criticizing her role as a wife.

“You know, I feel bad. I apologize to Lydia for doing that,” she said. “But you go too far, man. So, I apologize for being vulgar, for how I acted, but not what I said. I meant that. Stay out of my business. No woman — including aunts, uncles, moms — is gonna tell my husband what to do. That simple.”

Deem did say she was sorry for her actions, and claims they were not planned.

Michael also made an appearance on “90 Day Bares All” where he expressed his shock at his wife’s actions.

“Oh gosh, that was totally atrocious,” he said. “I mean, I was surprised and shocked. Why would you open your breasts to the camera? Like, that’s crazy! So please, don’t do that again. I said, don’t do that to me.”

Angela Deem Exposed Her Crotch on ’90 Day Bares All’

While appearing on the late-night show, Deem exposed herself again. This time revealing her crotch while talking about what plastic surgery she still wanted to get.

“We don’t have much to do but there’s some loose skin and dents and cellulite, in my arms of course and right here between my thighs,” Angela said while spreading her legs and pointing to her inner thigh. “Like, these are holding them together but there’s some jelly right there, you know?”

Robinson laughed and joked with Ortiz, the cameraman, about yet another reveal with him behind the camera.

“Could you see through it?” Angela asked of her sheer black tights. “I’m so sorry. It’s a granny crotch. Don’t worry about it.”

Angela and Michael are Still Together Despite Threats of Divorce 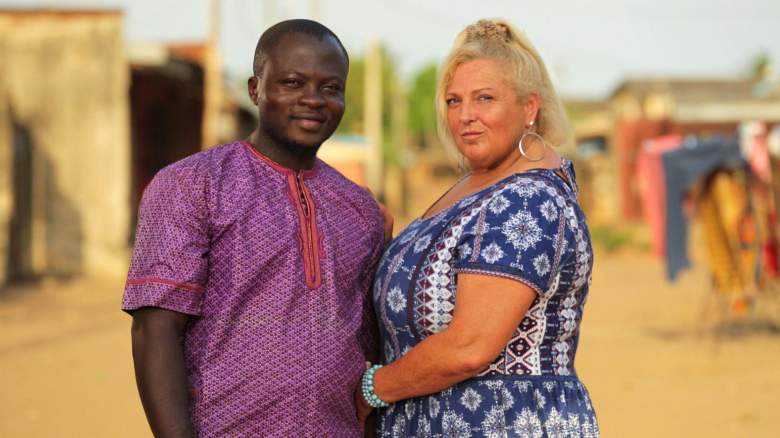 TLCAngela and Michael of 90 Day Fiancé

A big storyline for Deem this season was her considering divorce. She sought legal advice and even threatened Michael on the “90 Day Fiancé: Tell All.” Despite all the threats, they are still together.

Michael took a lie detector test while appearing on the show and passed when he was asked if he was just marrying Deem for a green card.

READ NEXT: Angela Deem Net Worth & Income on 90 Day Fiancé

Loading more stories
wpDiscuz
0
0
Would love your thoughts, please comment.x
()
x
| Reply
Angela Deem revealed to her fans the reason she flashed her breasts on the "90 Day Fiancé: Tell All" episodes earlier this year.