A star of “90 Day Fiancé” is facing a domestic violence charge just days after a cheating scandal involving her husband was revealed.

Arrellano and her husband, Mohamed Abdelhamed, 28, had recently separated after she discovered text messages from another woman on his phone, according to In Touch. The outlet reported that Abdelhamed moved out of the couple’s home on August 14, a day before the charges were filed.

The cheating scandal played out on the August 21 episode of “90 Day Fiancé.” 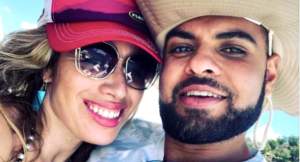 Abdelhamed said his wife “attacked him while trying to obtain access to his phone inside their home,” a police report said, according to In Touch. The officers arrived at the home around 2 a.m., the outlet reported.

According to the outlet, police officer Jasmin Romero wrote in the police report, “Upon arrival, I met with Mohamed. He began to explain he has been in a relationship with his wife, Yvette Arellano, since June 2019. He said they were married on January 8, 2022. He was living with her until two days ago when he moved out. Throughout the relationship, he said he has endured emotional and physical abuse from Yvette. He said when she drinks she becomes very violent and angry.”

The report continued, “He said he has not called the police during their argument because he is afraid. He does not want to get in trouble for asking for help, He played an audio recording from July 21, 2022, and Yvette is yelling at him, telling him she needs help with dishes, the laundry, and other things in the house. I can hear Mohamed yelling in the background telling Yvette not to hit him again. He said they were on a show called 90 Day Fiancé and they developed a fan club.”

The report detailed Abdelhamed’s apparent cheating on Arrellano with a fan named Andrea, who had sent him “gifts and money” for more than a month.

“Eventually, he broke it off with Andrea and Andrea extorted him saying she was going to tell his wife about their relationship if he ended things with her. By this time, Yvette had found out about Andrea and confronted him about it and said she was angry and tried fighting him for his phone,” Romero wrote, according to the outlet. “Yvette tried to grab the phone from him and he fell onto the floor. He said she sat on top of him and put her knee to his throat to try and force him to release the phone. He was able to get out from under her and said he did not physically hurt her while getting away.”

The officer says they spoke with Arellano by phone, according to the outlet.

“She had been publicly humiliated by the female Andrea and another female from Minnesota with whom Mohamed has engaged in an affair. Due to his infidelity and her stress regarding the loss of a friend, she said she has been worried Mohamed would try to get her in trouble,” Romero wrote in the report, according to the outlet. “She said Mohamed had been making plans with Andrea to get Yvette in trouble with the law so he could apply for his U-Visa. She is scared and worried because she does not know what he is capable of doing.”

The officer reported no “injuries on either party.”

Arellano’s rep, Dominique Enchinton, of Dominton Talent House, spoke to In Touch and denied the claims on her clients behalf.

“The domestic abuse allegations have been falsified by Mohamed. Mohamed and the woman he has been cheating on Yve with have discussed his options from the very beginning. They specifically discussed a U-Visa and how Mohamed could qualify for this just in case Yve found out about his indiscretions. The domestic abuse allegations are completely false and just a ploy to keep him in the US. Yve was not arrested on 8/15 or any other day. Yve has never been abusive toward Mohamed and just wants this chapter in her life to be done so she can move forward.”

Arellano married Abdelhamed during season 9 after a season fraught with fighting and cultural differences which saw Abdelhamed threaten to “find another sponsor” unless Arellano hurried up and married him.

The couple appeared happy at the beginning of the August 21 “Tell All” episode of “90 Day Fiance.” But then the cheating bombshell was dropped.

On the episode, Abdelhamed and Arellano explained their sides the story, with Abdelhamed admits he had been in the wrong and saying he was working to regain Arellano’s trust. Screenshots from Abdelhamed’s phone appeared onscreen showing text messages in which he, an Egyptian, wrote that he had to remain married to get a green card but clear professed love for another woman.

“Let me be clear. Of course I blame him as well,” Arellano wrote via her Instagram Stories after the episode aired. “First time I get to say anything though. Everyone was demanding I say something [and] finally get to, so just take it as facts … [and] one of these women was still married as well.”

On the episode, she discussed her feelings after finding the messages.

“You know, it’s very shocking, raw, disappointing, saddening,” she said at the end of the episode. “He chose to spend his time focused on starting other relationships and engaging in activity that a married man should not be engaging in. … I asked him if I could see his phone, and that happened and I saw inappropriate things. I saw pictures and calls, and put the pieces together.”

Abdelhamed explained his side of the story on the show as well.

“I met a girl online,” he said. “She was very nice, I thought we [were] friends. … And then, things started to get bigger. Yve saw my phone. She saw the text messages, and that’s how Yve knew.”

He continued, “I texted these women and told them, ‘I am a married man. Please stop texting me.’ I know I did wrong. I told the same story to my wife and promised her that will never happen again. I do love Yve, and she doesn’t deserve that.”