The judges on “Shark Tank” may have their eye on a new guest judge.

On a recent episode of “Behind the Velvet Rope with David Yontef”,  Kevin O’Leary (a.k.a. Mr. Wonderful) was asked if he thought Jennifer Lopez would make a good “Shark Tank” judge.

He replied, “You know, in the brief moments I’ve known her, backstage and at the American Music Awards or that kind of thing, or on the set of ‘Shark Tank’ I would say she’s a pretty pragmatic woman given all the ups and downs that she’s dealt with in her life. And I think that adds character, is what I think. And I would guess that she would be a good Shark because she could take the heat.”

He concluded, “You got to remember something: We say hi to these guests. And we enjoy meeting them and their company. But the minute those cameras start rolling and a deal’s in front of us, they’re competitors. And we rip them to pieces. I’m happy to shred her to pieces. If I have to, that’s fine.”

O’Leary on Bethenny Frankel: ‘She Is Definitely on the Scale of Crazy Chicken’

During the same podcast interview, O’Leary opened up about Bethenny Frankel, stating, “I know Bethenny quite well. She’s got a lot of energy, as you know, everybody has their own style. Actually, I’ve done deals with Bethenny. We have a deal called Snarky Teas together, which has done quite well. But you know, everybody’s their own crazy chicken. And she is definitely on the scale of crazy chicken.”

Frankel is the founder and CEO of the lifestyle brand Skinnygirl, and has worked as a guest shark on “Shark Tank” multiple times. 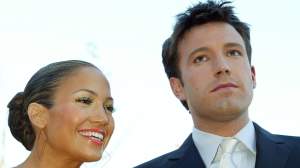 GettyBen Affleck and Jennifer Lopez arrive at the premiere of “Daredevil” at the Village Theatre on February 9, 2003 in Los Angeles.

The question of whether or not Lopez’s schedule would allow her the opportunity to guest star on “Shark Tank” is up for debate.

Lately, the singer has been making headlines for her relationship with Ben Affleck, whom she dated in the early-2000s.

On July 15, TMZ reported that the duo was spotted scouting a new LA home for Lopez. The mansion they toured reportedly cost $65 million and came equipped with 8 bedrooms and 12 bathrooms.

On July 8, a source told Us Weekly, “Ben and Jen are spending almost every night together when they’re not working. They plan on moving in together very soon.”

The outlet noted that soon after rekindling their romance in May, the two took a trip to Montana together. A source explained at the time that they “looked very happy together.”

Affleck has three children with his ex-wife, Jennifer Garner, while Lopez has twins with her ex-husband, Marc Anthony.

The original source told Us Weekly, “As far as Jen sees it, she and Ben have their whole lives now to set things up in a comfortable way. She intends to be an involved stepmom who’s there for Ben in that area, plus she’ll want him to make the same effort with her and Marc’s kids.”