Getty US singer/songwriter Katy Perry attends a press conference in Mumbai on November 12, 2019, ahead of her concert on November 16 at the OnePlus Music Festival.

Is Katy Perry married? Has she wed Orlando Bloom, with whom she shares 10-month-old daughter Daisy Dove?

On Sunday, June 20, Perry posted a tribute to Bloom on Instagram in honor of Father’s Day. In the video, the “Pirates of the Caribbean” actor appears to be wearing a band on his ring finger.

Fans have been quick to jump to the assumption that the ring is a wedding band, but is it? Could it be something else?

Bloom Tracks His Sleep With an Oura Ring

As pointed out by In Touch Weekly, Bloom wears an Oura sleep ring, and the ring he is wearing in the Instagram video bears a resemblance to an Oura ring.

In an interview earlier this year with The Sunday Times, Bloom shared, “I wake up at around 6.30. I have a smart ring sleep tracker and the first thing I do is look at the app to see if I’ve had a good sleep and check my readiness for the day.”

He added, “I chant for 20 minutes every day, religiously. I’ve had a Buddhist practice since I was 16, so that’s infiltrated my whole being.”

The actor stated that he attributes his mental health to these Buddhist practices.

“Without my Buddhist practice, I could have easily come off the rails,” he said. “I’ve been changing the narrative in my head and feel that I can be the driver of my train. I can set it alight, but I can get the fire crew and put it out.”

Katy Perry: ‘Daddy Has Stepped In’

In October 2020, Katy Perry opened up about her daughter’s birth and how it has affected both her and Bloom.

Speaking to ET‘s Rachel Smith about heading back to work after Daisy’s birth, the “Roar” singer said, “It’s amazing. I’m so grateful for this opportunity and for this job, and to be able to continue to inspire other people to go after their dreams. I mean, my life just feels very full and whole. And you know, it’s hard a little bit these first couple of days away and not being able to be there.”

She added, “But Daddy’s doing a great job. Daddy has stepped in. I’ve seen the Bjorn on him, I’ve seen him with the bottle, I’ve seen all the pictures. It’s all good.” 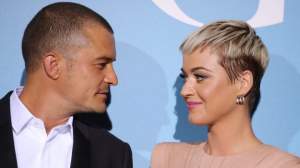 In September 2020, a source told Us Weekly that the two weren’t focused on their wedding — not after their daughter’s birth, at least.

“Katy and Orlando’s wedding will not be taking place in 2020,” the source shared. “It just wasn’t meant to be. Their beautiful daughter arrived and she is their sole focus. Planning for any wedding has been put on hold. It will happen, but it’s just not something they are focused on as a couple currently.”

Their wedding was initially slated for December 2019, but the date was changed because of location issues, according to Us Weekly.

At this point, it’s unclear when exactly Perry and Bloom will officially tie the knot.