Andy Cohen recently took some time off from his busy schedule to head to the Hamptons for a vacation with his son Ben, three, and his three-month old daughter Lucy.

The “Watch What Happens Live” host had a couple of run-ins with other Bravolebrities during his time at the beach, according to some photos that were shared on social media. On September 2, Cohen met up with former “Real Housewives of New York City” star Bethenny Frankel at the beach in the Hamptons.

Frankel shared a photo on her Instagram Stories of the pair smiling at the beach in their bathing suits and wearing sunglasses as she tagged the Bravo head in the photo. Cohen then shared the selfie on his own Instagram Stories and added the teasing caption, “We truly mentioned it all…”

Cohen, Who Also Ran Into a RHONJ Alum, Shared Some Videos of His Vacation With His 2 Young Kids 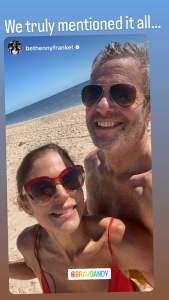 Frankel isn’t the only Bravolebrity that Cohen saw while on vacation, as he posted a photo the day before, on September 1, with Dina Manzo. Cohen shared a cute photo of himself with the RHONJ alum on his Instagram Story and captioned it, “Ran into Dina in MTK today!” along with a sun emoji. Dina shared the photo on her own Instagram Stories with several kiss emojis.

Cohen gave Bravo fans a glimpse of his vacation through some humorous videos of his car trips with his two young children. The single parent posted some videos of himself speaking rationally while his distraught toddler could be heard yelling in the background.

He captioned one of the videos from September 2, “My ‘vacation’ in a nutshell,” with an upside-down smile emoji. Another similar video posted on September 5 had inlay text reading, “End of vacation.” In the caption, Cohen wrote, “I need a vacation.”

Frankel has come under fire recently after Courtney Stodden called out the former Bravo star for her comments during an interview nearly 10 years ago. Frankel has been critical of the Kardashians for sharing “distorted” beauty ideals but Stodden didn’t appreciate some of her comments and wrote on Instagram, “How are you @bethennyfrankel for girls/women when you made me feel so mocked on your show when I was 19?”

Stodden also posted an apology that they said Frankel sent via direct message but fans were very critical of it, accusing Frankel of “gaslighting” Stodden and taking credit for their healing process.

Loading more stories
wpDiscuz
0
0
Would love your thoughts, please comment.x
()
x
| Reply
Andy Cohen shared a photo of himself and a former Bravo star during a recent linkup.