It was a busy weekend in New York City at BravoCon with linkups from stars across franchises but Andy Cohen made it clear who he was happy to see.

On the first night of the event, the Bravo head was seen jumping into the arms of “Southern Charm” original star Shep Rose. He shared the photo on his Instagram Story which had the caption, “Find someone to greet you like [Shep Rose].” It showed Rose hugging Cohen tightly and picking him up off the ground as Cohen smiled happily.

Some fans called out Cohen for showing favoritism to certain Bravo stars. 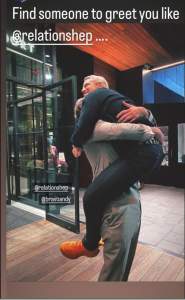 The photo was shared on Reddit with the caption, “Andy: ‘I don’t take sides’. Also Andy:” showing the hug and someone quickly agreed that Cohen “definitely jumped in to defend Shep this last episode,” meaning the “Southern Charm” season 8 reunion.

Someone else said, “Andy likes the worst straight guys!!!!” Several people called it “gross” in the comments while another person wrote, “Andy told Shep in part two of the reunion he felt very badly for Shep. Really? You feel bad for an abusive Peter pan dude?”

A couple of commenters pointed out that Cohen made the comment about not taking sides during the “Real Housewives of Potomac” season 6 reunion, when Nicki Minaj made a guest appearance. Cohen told the rapper that he was looking forward to her guest hosting because she could take sides and say her opinion, unlike him, as People reported.

“Southern Charm” fans have known for a while that Cohen gets along well with Rose. In fact, as of early 2021, Rose was one of only three Bravolebrities that Cohen follows on Instagram, the other two being Rose’s co-star Craig Conover and “Vanderpump Rules” star Tom Sandoval, as Showbiz Cheat Sheet reported.

The second part of the season 8 “Southern Charm” reunion, which aired as BravoCon was kicking off, saw Rose and his ex Taylor Ann Green face off. Green accused Rose of sleeping with other women during a trip to Texas but viewers quickly noticed that Cohen came to Rose’s defense, pointing out that the two were no longer dating at that time. Another scene of the reunion showed Cohen and Rose backstage during a break as Cohen told the Bravo star that he felt bad for him.

Fans called out Cohen for that as well, with some saying they were “infuriated” to see him feel bad for Rose while Green was crying and criticizing her ex. Someone wrote, “Like I am floored that he shows no regard for a women who is struggling with her pain and he continues to dig at her while consoling Shep. WTH??” Another person commented that Cohen “defending” Rose on the reunion was “not a good look.”