Season 8 of “Southern Charm” may be the last that fans will see John Pringle on their screens as the season 7 newcomer indicated on his Instagram Story recently that he was heading back to San Diego, California.

The single father posted on his Story, “Hey San Diego! I’m coming back. Looking for a short term rental while I look for some land. Good luck, right? Any leads are welcome! My budget is 3 peanut shells, a button, and a solid foot rub.” 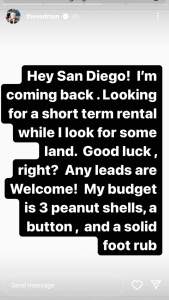 As Pringle shared on the show last season, his ex-wife and his two sons were living in California and he returned to his native Charleston to pursue a work opportunity. This seasons, viewers have seen Pringle demoted from a full-time cast member to a guest and it seems as though he might not appear at all in the future, although that has yet to be confirmed by Pringle or the network.

Fans had a lot to say about Pringle’s announcement after it was shared on Reddit, with many saying that they were happy for him if it meant he’d be closer with his family. Someone said, “So sad bc he does seem like a nice guy.” Another replied, “Which is exactly why he doesn’t belong on SC. I’m happy for him.” Someone else agreed, “Happy for him to be close to his kids.”

One person commented, “He seems like a nice enough guy but weirdest casting choice lol I really think we should look outside Shep [Rose’s] inner circle for casting for this show.” A few said he was “hot” and that they’d miss his good looks. “I’m attracted to Pringle. Help,” one person said.

One Redditor shared, “Pringle is totally underutilized this season.” Someone else commented, “He’d be perfect in a Cameran [Eubanks]-style Greek chorus, narrator role. Above the fray but making funny observations about the drama.” One person commented, “I’m a Pringle fan but at the same time he was far too rational and adult for the Southern Charm crowd.”

One commenter wrote, “I think Pringle lost himself for a bit and was trying to find his way when he came back to Charleston. When he was first on SC, they really tried to push the party image and the whole flirtation with Madison [LeCroy], but I really do think he is a nice guy who loves and misses his kids and doesn’t want drama.”

Season 8 of “Southern Charm” saw Pringle cast as a friend on the show instead of a main cast member like season 7 and there have been few appearances from the Charleston native so far this year.

According to his cast bio on Bravo, Pringle is a “seventh-generation Charleston native” who became good friends with Shep Rose after both attended the University of Georgia together. “After college, he left for NYC to learn the family commodity business firsthand,” and he now works trading commodities, he revealed in season 7.

Pringle is passionate about songwriting and according to his cast bio, he released “his first LP ‘Strange Points of View'” and then “went on to record two EPs – ‘Midnight Mass on the Williamsburg Bridge’ and ‘Simple Act’ – and toured extensively behind them.”

In terms of his personal life, Pringle and his now ex-wife Heidi welcomed their first son Quinn in California and second son Asher 16 months later. “Though his marriage to ex-wife Heidi was short-lived, they remain friends who co-parent to the best of their abilities,” his bio states. “New opportunities bring John back to Charleston this year, as he looks to return the family business to the place where the Pringles have long-thrived.”

Loading more stories
wpDiscuz
0
0
Would love your thoughts, please comment.x
()
x
| Reply
One star of 'Southern Charm' shared that they were moving to California and fans reacted to the news.