The  “Vanderpump Rules” star took to Instagram to address a birthday photo that was posted by her co-star, Raquel Leviss.

On January 16, Maloney celebrated her 35th birthday, and several of her co-stars shared messages to her on their social media stories. But one post caught the eye of social media commenters and it spawned a big response from the former SURver.

On her Instagram story, Leviss’ birthday message to Maloney included a photo that was taken at her engagement party in July 2021. The gala, celebrating Leviss and her now ex-fiancé, James Kennedy, was filmed for the “Vanderpump Rules” finale.

In the candid pic, Leviss was wearing an off-shoulder green dress, and Maloney was wearing a brown dress as she held a wineglass and laughed with her co-star. The photo was a side view of the two women. Leviss captioned the photo to wish Maloney a happy “belated” birthday.

Maloney proudly reshared the photo on Instagram along with a caption urging her followers to “please read.” The Bravo star noted that she had wanted to post the pic on her own Instagram page sooner, but was then “alerted” that the photo was “mean” and that she should have been angry about it. Maloney then addressed commenters who felt the photo of her was unflattering and was posted by Leviss in a mean-spirited way.

“It’s assumed that because some have found it unflattering that I would agree or that I would be angry that someone would post an unflattering photo of me,” Maloney wrote. She added that what she saw was a joyous photo of two friends.

“I’m not blind, I can clearly see the expression I’m making has given me about 12 chins,” she added. “I have been hearing now for too long that I should be ashamed of my body, calling out weight gain, weight loss, that I need to dress for my body…and it f***ed with me. It made me not even want to take photos with my friends and family, because I wouldn’t like the way I looked.“

Maloney admitted that in the past she has avoided posting photos due to “bad angles,” but no more.

“Being about to look at the photo and not feel shame and only happiness because I look so happy here is really showing me that the work I have been doing is improving my self image,” she revealed. “Self hate/criticism is more damaging than that of others.”

Maloney’s post received support from fans and friends. Leviss posted a comment to show support for Maloney – and to explain why she shoes that particular photo to post for her birthday.

“Oh my goodness,” Leviss wrote. “I love you for standing up to this nonsense. People can be so cruel. I saw this photo and it make me smile cause it’s so candid. When I posted this, I kept thinking how effing cute your beaded heart bag is with that dress. I think you’re so beautiful!!!! People need to look at the bigger picture and realize that what they say can impact how we view ourselves if we let it. I admire you for not letting that get to you.” 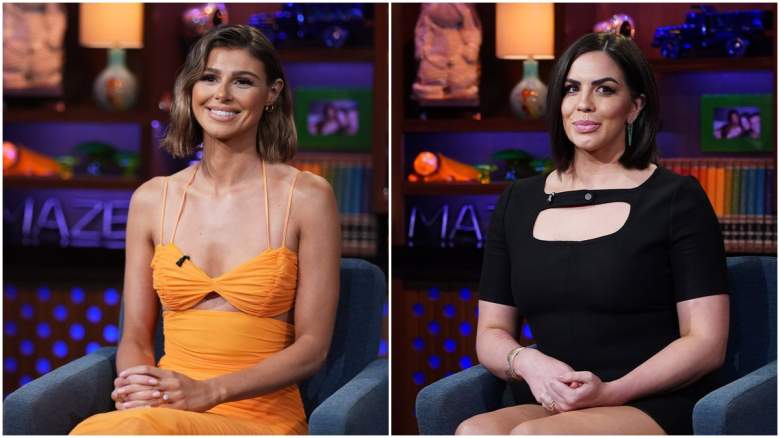 Maloney’s post came in response to social media commenters who took issue with Leviss’ birthday post. In a Reddit thread, one “Vanderpump Rules” viewer reshared the photo and wrote, “WHY?!? Raquelle doing Katie so dirty with this unflattering photo to accompany lukewarm birthday wishes.”

Others responded to say that Leviss posting the photo was “intentionally shady.”

“That is a total dig at Katie,”  another commenter wrote. “Katie was a complete b*** to Raquel for many seasons and now the mean girl backups are gone Raquel is getting in her digs. I was surprised Raquel would act like this but can’t blame her. Revenge.”

Another addressed Maloney’s “triple chins” in the photo.

“If you’re posting a picture for someone else’s birthday, the picture should be a flattering picture of that person! If you’re the only one that looks good in the picture you posted for your friend’s birthday, for SHAME!” the commenter noted.

Yeah,” another agreed. “I would hope my friends would at least consider how we both look for MY birthday photo. Geesh.”

“This might be the meanest thing Raquel has ever done,” another chimed in.

READ NEXT: Katie Maloney’s Transformations Over the Years