In a photo shared on Instagram, Doute posed with Schroeder and Maloney in front of an empty bar while celebrating at the Belmont in Los Angeles.

“Witches of freaking Weho,“ Schroeder captioned the chummy pic, in reference to the trio’s nickname.

“This is f###ing adorable,” Doute wrote in the comment section

“My sisters… I love you both so much,” Maloney replied. “Where would I be without you both. The memories are STACKED! Here at the Belmont with you, where we have made the most memories. I’m emosh.”

Doute also shared the photo on her Instagram page with the caption, “We are so flipping cute love you to the [moon]. Hbd Katie.”

On her Instagram story, Doute shared footage of a crowd singing “Happy Birthday” to Maloney as she opened a box containing a Cabo San Lucas-themed cake. Maloney’s husband, Tom Schwartz, and his bestie business partner, Tom Sandoval, could be seen in the background at the bash.

Fans Reacted to the Photo of the Witches of WeHo

There was a mixed reaction to the new photos of the former Witches of WeHo wine entrepreneurs. Several fans were thrilled to see the three-women girl gang back together.

“The trio is back together,” one fan wrote. “This is the show I want,”  another added.

But others were confused, given the roller coaster dynamic between the three.

“I can’t keep up with this friendship haha,” one fan wrote.

“Wow. I never thought I’d see you 3 be close again,” came another comment.

“I’m so happy for you 3,” another fan wrote. “The love was so clearly there but no matter how much you love someone, mistakes get made, anger happens and all relationships need work.”

Others wanted to know if the friends’ Witches of WeHo Nocking Point wine brand will be coming back. 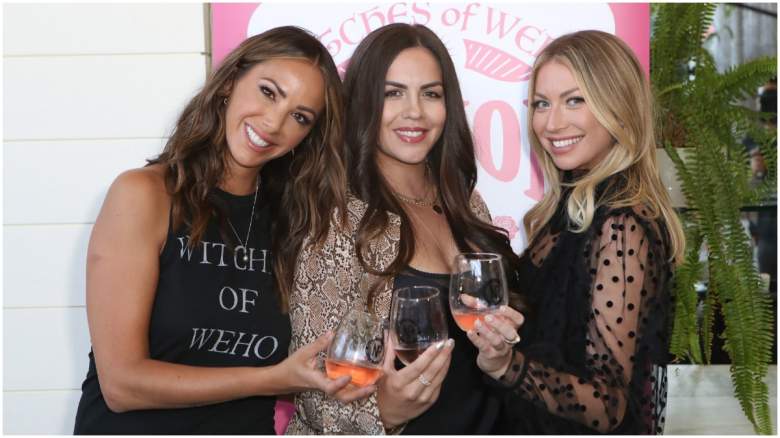 The new photo comes more than two years after the three friends had a major falling out. Before Doute and Schroeder were fired from “Vanderpump Rules” in June 2020, they engaged in a very public feud. On their final season together, Schroeder and Maloney criticized Doute’s relationship with then-boyfriend Brian Carter, and began to ice her out.

“[Stassi and I] both saw our friend struggling and felt that her behavior was very dysfunctional and we wanted to step in and be like, ‘Hey, I want you to be happy,’” Maloney told Us Weekly at the time. “And she kind of thought we were just trying to tell her what to do with her life and all that, so we ended up just kind of being like, ‘You know what? We’ve gotta take our space.’”

Doute then made an ill-fated comment on a “Vanderpump Rules” after-show in which she stated that in a few years, no one will care about Schroeder’s podcast.

“Who wants to hear a 40-year-old talking about a pop culture podcast? Like, slow your f***ing roll,” Doute said, per E! News. “Like, I don’t kiss the ring and Stassi Schroeder, you’re much younger than me and, b****, you were nothing a few years ago.”

She also talked about watching her former friends call her a “psycho” during their final season together on “Vanderpump Rules.” According to BravoTV.com, on the after-show, Doute said she felt that her friends ganged up on her. When asked if she thought there could be a reconciliation, she said, “I mean, I hope so. I absolutely hope so. I think my issue is that it feels like it’s two against one all the time.”

“I would really love a different kind of friendship with both of them… but I don’t know,” she added.

But the “Vanderpump Rules” firings ultimately brought the three back together.

“When everything happened… with them getting fired, I just was like, ‘You know what? Kristen has been someone who has been like a sister to me for so long, I can look past all the drama that happened last year and just be there for my friend right now,’” Maloney told Us Weekly in 2020. “The [past] stuff just seemed petty in the big picture and wanting just to be there for her and support her and [let her] know that it’s going to be OK and trying to just be supportive.”