Fans are laughing at Lisa Vanderpump for her response to a “Vanderpump Rules” cast member getting married.

On Tuesday, August 23, Scheana Shay married Brock Davies in Mexico. This was the second wedding for Shay who was dating, engaged, and eventually married Mike Shay in the early seasons of “Vanderpump Rules.” 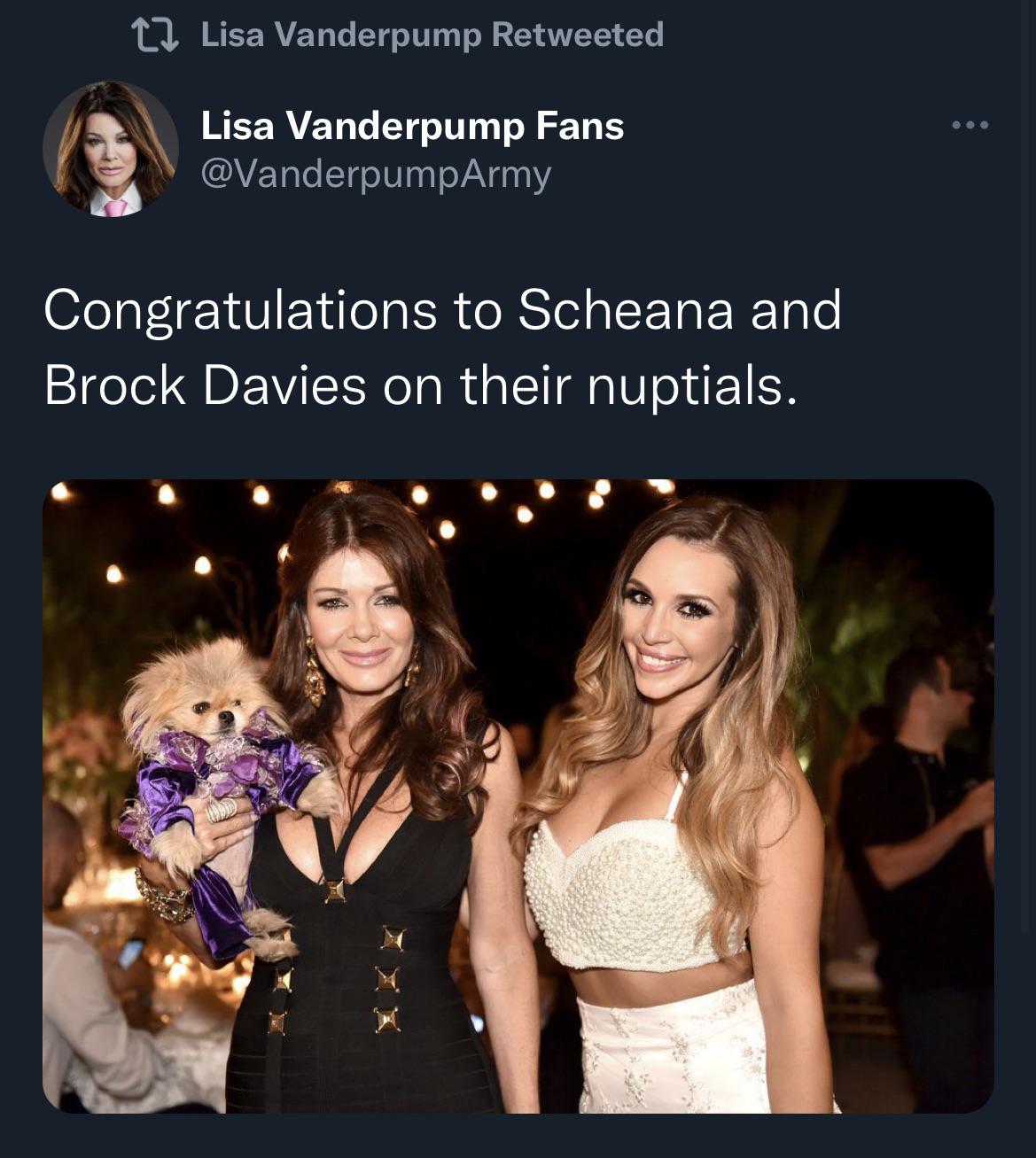 Vanderpump, who is both a former boss and a friend to Shay did not appear to attend the second nuptials but she was at the first. When news of the marriage was made official a fan account shared a photo of Vanderpump and Shay together at her first wedding with the caption, “Congratulations to Scheana and Brock Davies on their nuptials.”

“LOL you’re so shady, this is why I love you so much and want you back on the show,” someone tweeted.

A Reddit thread was started titled, “Dying at LVP retweeting this picture of Jancam at her first wedding to celebrate her second”

“The shade,” someone wrote. “Lisa really is the queen of British snark.

“that hysterical and you know Lisa is too smart to have done that by accident,” someone said.

“This is why Lisa will always be my favorite housewife, she’s quick-witted and funny!” a fan wrote.

“Cold blooded, Lisa. And I love it,” someone else said.

“exactly!! Lisa knew what she was doing retweeting that,” someone agreed. “There’s so many other photos of the two of them!!!”

This is something my mother would do, only because it’s a picture where she thinks SHE looks good. Lol,” a fan pointed out.

Someone said, “Oh I love Lisa. Of course this was done purposefully. Too funny.”

“Not a fan of LVP this is not shady this is just mean,” a fan wrote.  “Choosing the photo because you look good at her first wedding is a shorty thing to do. Not a scheena fan but she’s marrying the father of her child, it’s 10 years later. Like lvp is just the worst.”

“I like Lisa, but I agree, this is mean,” someone said. “Scheana obviously wouldn’t like it, and it’s a silly thing to do on a post that’s meant to be celebrating her. Giving the biggest benefit of the doubt, Lisa may have retweeted it because she looks good in the shot, without considering where it was taken.”

“This is throwing so much shade….,” a fan pointed out.

Vanderpump was heavily involved in Shay’s first relationship. She got engaged at Vanderpump’s home and Vanderpump’s daughter Pandora was a close friend and bridesmaid in the first nuptials.

Heavy reached out to Vanderpump for comment but received no response back.

Loading more stories
wpDiscuz
0
0
Would love your thoughts, please comment.x
()
x
| Reply
Fans are laughing at Lisa Vanderpump for her response to a "Vanderpump Rules" cast member getting married.