Madison LeCroy took part in a Q&A on her Instagram this week and some of the advice she shared with her followers about cheating in relationships got a lot of reactions from “Southern Charm” fans.

Someone asked the Bravo star for “advice on how to move on from a cheater” and she replied with a photo of herself and a four-step list. “1. Cheat on him,” she wrote. “2. Dump him 3. Get a hot bod 4. Get a hotter bf.”

LeCroy also answered other relationship questions, including one from someone who asked, “How to move on from a break up from someone who couldn’t grow up & commit?” She shared a photo of herself with her son and her fiance and wrote, “Just focus on you & only take applications from guys who want the same things.” 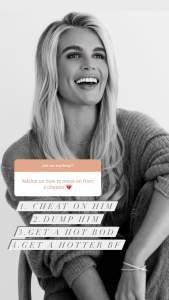 Fans were quick to respond to LeCroy’s advice, especially her comments about moving on from a cheater, in light of her fiery relationship with ex Austen Kroll on “Southern Charm.”

The timeline of LeCroy’s relationship with her “Southern Charm” co-star Austen Kroll is a confusing one as they broke up and got back together more than once during a period of about two years and two seasons on the hit Bravo show.

Kroll explained in May 2019 before “Southern Charm” season 6 premiered that he met LeCroy in January 2018 at a dinner with Naomie Olindo. The two started dating sometime after that and went on a trip to Colorado together in April 2018. Season 6 of the Bravo show began filming in October 2018, just a couple of months after a video started circulating online, as Elite Daily reported.

The infamous video was featured several times in “Southern Charm” season 6 and it showed LeCroy apparently catching Kroll in bed with two other women. When the season started airing in May 2019, Kroll explained that the video was taken “very early on” in their relationship before they were officially together. Season 6 showed that the couple broke up in the fall of 2018 when Kroll heard rumors about LeCroy messaging other guys on Instagram but they rekindled things on a cast trip to Colorado in December 2018. These episodes aired in the summer of 2019.

The couple continued their relationship in the spring of 2019 and went on a vacation to Kiawah Island, South Carolina together. However, as season 6 began airing, the two broke up and by the time the season 6 reunion came around in August 2019, they revealed that they were over. However, the split didn’t last as they posted a couples costume for Halloween in October 2019. The relationship struggled during quarantine as COVID-19 hit and the difficulties with the pandemic were documented in season 7 of “Southern Charm.” On December 10, 2020, LeCroy told Us Weekly, “We are not together right now. I am 1,000% single, and so is he.” 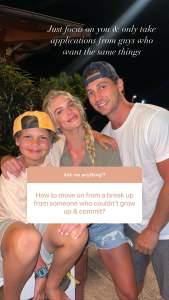 Someone praised the Bravo star, “although Madison has some toxic ways she’s the only one that knows how to handle these lame a** guys. I enjoy her. I kind of think she great. She gets even not mad. Her bod, her business, her engagement good for her!” Another agreed, “I’d say she’s a great representation of a strong, confident woman, full stop. She’s funny, savvy, takes zero s*** from anyone, and yeah, she’s in amazing shape.”

One person wrote, “She hasn’t done any worst than the guys on the show. I like her because she is the only female that stands up to the boys club.” Someone wrote that LeCroy’s advice “clearly worked for her!” Another said, “she’s not wrong! I do find it annoying that Austen conveniently forgets that he cheated on her…”