Shay was previously married to Mike Shay  from 2014 until 2017, and her engagement, wedding, and divorce were featured on ”Vanderpump Rules.” The SURVer turned “Good as Gold” singer has been in a relationship with Davies since 2019.

Davies teased the engagement earlier in the week. In an Instagram Live, the pro rugby player answered a fan who questioned if he and Shay were getting married.

“You guys want to know if I’m getting married?” Davies asked. “You’ll find out what happens this week, guys.  Check out the news articles.”

Turns out he wasn’t kidding. On July 23, Shay confirmed the engagement news with a photo on Instagram. 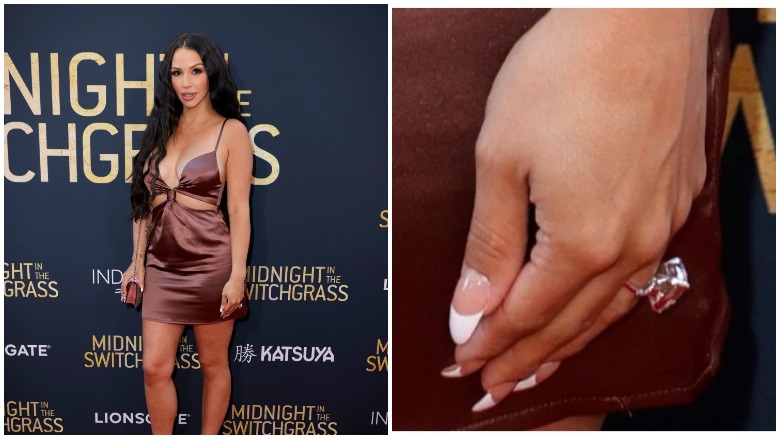 Earlier in the week, Shay was seen wearing her large diamond ring while out in Los Angeles earlier this week.  E! noted that celebrity jeweler Kyle Chan designed the ring. Chan is the chosen designer for several past and present “Vanderpump Rules” stars, including  Jax Taylor, who hired him to create the perfect “push present”—a blue diamond ring with a white diamond halo—for his wife, Brittany Cartwright, earlier this year.

Shay’s massive ring was clearly spotted as she joined several of her “Vanderpump Rules” co-stars at the movie premiere for Randall Emmett’s film “Midnight in the Switchgrass” on July 19.  Shay posed for photos on the premiere red carpet alongside Davies, and she was not shy about showing off her ring finger.

Shay and Davies were also spotted celebrating their engagement with several pals, including  Ariana Madix, at Los Angeles restaurant, Craig’s, on July 20.

“Brock and Ariana kept grabbing Scheana’s arms and looking super happy and excited for her,” a restaurant source told E! News. “Scheana looked really happy, and her and Brock look really in love. They were cuddling at the table and laughing the entire night.”

According to Page Six, Shay also shared a video of her out with fellow engaged couple Raquel Leviss and James Kennedy. In the clip, Leviss had a “celebratory dessert” in front of her, and the entire table was heard saying “congratulations” when Shay had a similar dessert placed in front of her.

Hollywood Life shared photos of Shay exiting the upscale eatery with Madix, and the outlet included a close-up of her gigantic ring.

It was just a few months ago that Shay said she didn’t feel the need to get married again. In a vlog posted on her YouTube channel in January 2021, the “Vandeprump Rules” veteran responded to a fan who asked her if Davies planned to propose to her.

“I don’t know, and I don’t care,” she said at the time. “Honestly, I mean, we’re having a baby, and I’m happy about that. We both have been down that road before. Been there, done that, so I’m not in a rush to get married again. I think eventually, we’ll get engaged and have a longer engagement, but I don’t think there’s any rush on getting married.”