Scheana Shay set the record straight on the reason for her recent move back to Los Angeles after living in San Diego for the past eight months.

The Vanderpump Rules star, who is due with her first baby on April 24,  replied to a Twitter user who speculated that her move back to the L.A. area just a week before her due date could be a sign that filming for the reality show might be resuming soon. Vanderpump Rules has been on hiatus for more than a year.

After the Twitter follower wrote, “Hoping this means they’re filming again soon. Nobody would voluntarily leave Palm Springs for Hollywood unless they’re getting paid,” Scheana fired back.

“I didn’t leave anywhere,” she wrote. “I still own my house in PS and have SD. My doctor, hospital, and family are in LA and I’m about to have a baby.”

Several fans chimed in to support Scheana and say it’s nobody’s business where she lives or why she moved. “You don’t need to explain yourself to anyone,” one fan wrote.

“The stork will find you wherever you are, LOL,” another added. “Excited for you to meet your baby girl. “

Scheana Previously Revealed That She Would Move Back to L.A. For Work 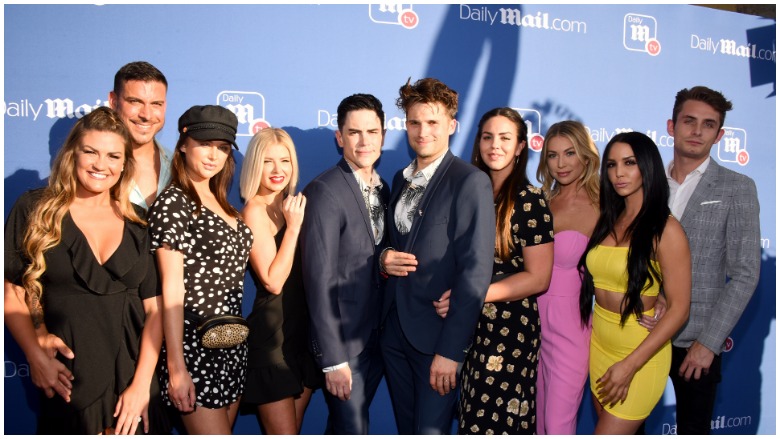 Scheana and her boyfriend Brock Davies are renting their dream condo on the beach in  San Diego, and they have a vacation home in Palm Springs, but with the impending arrival of “Mini Scheana” it’s not a surprise they want to be closer to family.

In fact, Scheana previously described her move out of Los Angeles as “semi-temporary.” After she moved out of Marina del Ray to her Palm Springs vacation home last year, she told fans, “Once work picks up back in L.A., I will keep a place in L.A.”

“For now, all of the money I’ve been spending on rent in Marina when I’ve been in Palm Springs for four months is just ridiculous,” she added,  per Bravo. “This seems like the smart move.”

With business at SUR, the West Hollywood restaurant Scheana long worked at and Vanderpump Rules films at, impacted by the COVID-19 pandemic, fans have been wondering about the status of the Bravo reality show. In addition, a racism scandal resulted in multiple main cast members being fired at the end of Season 8.

Vanderpump Rules has not officially been picked up for a ninth season, but during a recent episode of Watch What Happens Live, Bravo host Andy Cohen teased that once the California dining establishments are able to open up at a fuller capacity, he hoped the show would “start rolling” again. he also acknowledged that some of the new “babies” might be on the show.

Scheana & Brock Have Moved Back To LA To Get Ready For The Birth Of Their Baby Girl! @scheana #BrockDavies #ItsAllHappening💫 #PumpRules pic.twitter.com/cXsXdxMJ2E

Earlier this week, Scheana shared a video as she sat in a packed U-Haul while sitting in L.A. traffic. She told her followers that she and Brock were “half moved in” to their L.A. penthouse and were expecting furniture and other items to be delivered to their new pad soon.

In an interview with Bravo Insider, Scheana revealed the penthouse apartment features a wrap-around balcony and a view of the famous “Hollywood” sign. She added that there’s enough room for guests and she will have a special room to do her podcast.

The longtime SURVer also teased that her soon-to-be-born baby girl will have a nursery in both the L.A. apartment and the San Diego condo. “San Diego and LA will be very similar,” she said. “It’s just very white, rainbows, unicorn, girly.”

Scheana also admitted that the location of her new apartment was not her first choice at first.

“[Our new place] is in Hollywood, which wasn’t my ideal location,” she admitted. “But when we saw this place, and it’s so close to being off the freeway, I was just like, ‘Okay, that’s perfect.  It will just be really convenient for getting to doctor’s appointments and visiting my family, and my family coming to see us.”