Vanderpump Rules stars Tom Schwartz and Tom Sandoval appeared on the January 18 episode of “Watch What Happens Live,” where they gave an update on their bar business, Schwartz & Sandy’s. And it still sounds like it’s a work in “unprogess.”

On the 9th season of the Bravo reality show, fans saw the slow process of the duo’s bar in Franklin Village, California begin to unfold. At a “progress party” the two held to show off how far they’ve come, Lisa Vanderpump noted that things were moving at a snail’s pace.

But on WWHL, the two teased an opening date for the long-awaited bar. Sort of.

“It’s coming along, we’re working,” Schwartz said of the venture.

“We’re hoping to be open by the time the second sequel to ‘Avatar’ comes out,” he said. 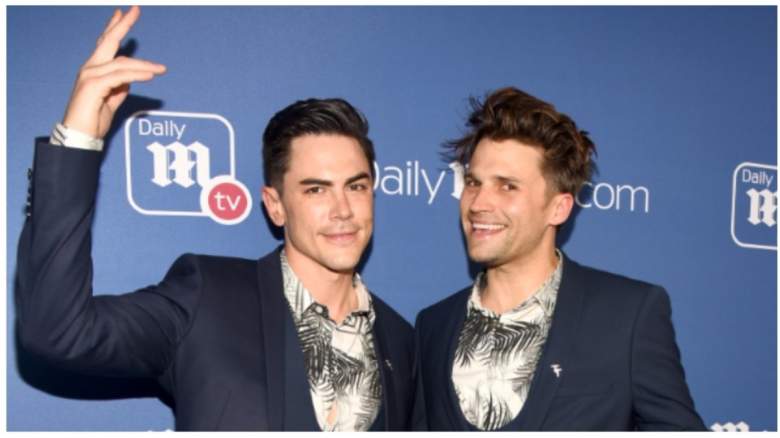 “Vanderpump Rules” fans saw the two Toms’ deep dive into the concept for their upcoming bar on the  November 9 episode of the Bravo reality show.  As the business partners attempted to come up with a mission statement for their new spot, they drank what appeared to be psychedelic mushroom tea to help inspire them.

In another WWHL segment, Schwartz noted that he has “curbed” his use of psychedelic mushrooms while working on the new business.

“Yeah that was a 2020 thing, you know,” Schwartz explained to a fan on WWHL. “I was having like, I felt like a once in a while well we don’t have to get too deep here I was having a bit of an existential thing and the shrooms really helped me get through. It honestly they did…I  needed them. But no, we’ve curbed our shroom intake because we have you know we’re involved in a very high stakes business venture and there’s no time for shrooms.”

Elsewhere during the WWHL interview, Schwartz admitted that he was hurt by Sandoval’s previous claim that he was responsible for bringing income into his household. The comment came during an on-camera argument Sandoval had with Schwartz’ wife, Katie Maloney.

“Yeah that was hurtful,” Schwartz said. “The condescension, the patronizing. That hurt. In our 10 years of friendship that was one of the most hurtful moments.”

Sandoval explained that when “COVID happened… I got the work for both of us.”

“Tom was dialed in,” Schwartz admitted.

Schwartz & Sandoval Have Taken Flack for Their Bar Name & Concept

Sandoval previously described the vibe of the new bar as “James Turrell, light artist, went over to his grandma’s house and took some acid.” But not everyone gets the concept or the name.

In October 2021, Entertainment Tonight teased that the Toms’ new pub would open in late 2021 or early 2022. At the time, the duo also addressed the bar’s name, which has been slammed by fans and by Schwartz’ wife, Katie Maloney.

“The people have spoken and it’s unanimous,” Schwartz teased to ET. “The public does not like it, but we’re going to make them like it! We’re committed.”

Sandoval compared the Schwartz & Sandy’s name to other “brand” names that don’t sound like what they are.

“We’ve heard people say, ‘Oh, it sounds like a Jewish deli,’ or whatever,” Sandoval admitted. “But you know, Red Hot Chili Peppers to me, when I first heard that name, sounded like a mariachi band. But now you have a different association. So when you go into our place, the name will become the place, the place will become the name. That will be the association.”