Carol Flynn was the wife of legendary comic book artist George Perez for more than 40 years, throughout his rise to fame with DC and Marvel comics. Perez died on Free Comic Book Day, Friday, May 6, 2022, one of his favorite days of the year.

Flynn was by her husband’s side when he died, according to Constance Eza, a friend of Perez who managed his social media accounts.

“George passed away yesterday, peacefully at home with his wife of 490 months and family by his side. He was not in pain and knew he was very, very loved,” she wrote.

Perez rose to fame in the 1970s and 1980s with DC’s “New Teen Titans,” and went on to work on “Crisis on Infinite Earths.” His work inspired films including “Avengers: Infinity War” and “Wonder Woman.”

1. Carol Flynn Was a Dancer & She Met Perez When He Was Working on the New Teen Titans

Flynn was a professional dancer, and Cracked noted that she came into the life of her future husband at the same time as he began incorporating more movement into his art.

‘The Judas Contract’—a storyline running in New Teen Titans (vol. 1) 42-44 and Annual 3—is the culmination of many threads from the series, including Dick Grayson’s name change from Robin to Nightwing. It also represents Pérez’s single greatest story. The most compelling sequence in a story full of them comes when Dick Grayson enters his apartment to find Deathstroke. Their fight is one of the rare moments when the static comic image succeeds at conveying kinetic motion.

“The storyline coincided with Pérez starting to see Carol Flynn, the woman who would become his second wife. As a dancer, she often brought Pérez to live dance performances,” the article said. “Reflecting his newfound appreciation of choreography, Pérez offers images where action progresses clearly from panel to panel. Swoop lines indicating the direction of blows also help guide the eye through this tangle.”

2. Flynn Was Perez’s Second Wife & They Did Not Have Children Together 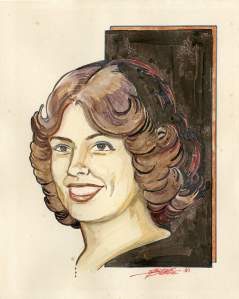 In the early days of their romance, Perez completed a comic book style portrait of his future wife. The 1980 portrait, “Carol Flynn,” includes some of the classic features of his art.

DC Publisher and Chief Creative Officer Jim Lee said in a statement that Perez’s legacy will live on through his art.

“George Pérez had an art style that was both dynamic and incredibly expressive,” Lee said. “His art was the perfect storytelling canvas for some of the most important events in DC history. While he will be sorely missed, his work will live on with a countless number of fans, as well as all the talent he’s influenced over the years.”

3. Carol Flynn Often Went With Her Husband to Appearances

Thank you. All of you, for the love and support you have shown George through all of this.

It meant the world to him. pic.twitter.com/zputTLO2sF

Flynn could often be seen by her husband’s side, and she was often photographed with him at appearances with his fans. In the announcement of Perez’s cancer diagnosis, he wrote that he wanted to spend quality time with her, describing her as “my beautiful wife of over 40 years.” He asked his fans to respect her privacy and that of his family, a request that was repeated by Constance Eva in his death announcement.

“Please keep his wife Carol in your thoughts and again, I thank you for respecting her privacy. I remain available through the contact on the page,” the post said.

“It will be open to all. Details to follow,” the post said. “We will miss him always.”

4. Flynn Was By Her Husband’s Side When He Died & They Were Married More Than 40 Years

Eva noted in her death announcement that Perez died on free comic book day, which she said was a day that he looked forward to every year. She said the date of his passing was fitting, and that he would want his fans to enjoy the day and remember him.

“Today is Free Comic Book Day,” she wrote. “A day George absolutely loved and a fitting day to remember his contributions to comics and to our lives. I hope you’ll enjoy your day today with him in mind. He would have loved that.”

Eva wrote that he was proud to have brought joy to the lives of his fans. She said she hopes that they continue to carry that joy with them throughout their own lives.

We are all very much grieving but, at the same time, we are so incredibly grateful for the joy he brought to our lives. To know George was to love him; and he loved back. Fiercely and with his whole heart. The world is a lot less vibrant today without him in it.
He loved all of you. He loved hearing your posts and seeing the drawings you sent and the tributes you made. He was deeply proud to have brought so much joy to so many.
Everyone knows George’s legacy as a creator. His art, characters and stories will be revered for years to come. But, as towering as that legacy is, it pales in comparison to the legacy of the man George was. George’s true legacy is his kindness. It’s the love he had for bringing others joy – and I hope you all carry that with you always.

Pérez launched the “New Teen Titans” in 1980 with writer Marv Wolfman. The duo were the creators of Cyborg, Raven and Starfire, and Dick Grayson became Nightwing, according to CBR.

“Wolfman and Pérez later reshaped the DC Universe with ‘Crisis on Infinite Earths,’ which, in turn, led to Pérez rebooting ‘Wonder Woman’ in 1987 with a beloved five-year run that redefined Diana for a new generation,” CBR wrote. “At Marvel, where Pérez got his start in comics, he is likely best remembered for two separate runs on the ‘Avengers;’ with Steve Englehart in the 1970s and then with Kurt Busiek in the 1990s, where the two relaunched the series in 1998 to great acclaim.”

5. Perez Announced He Was Diagnosed With Inoperable Stage-Three Cancer in 2021 & Decided Not to Undergo Chemotherapy to Spend More Quality Time With His Wife

George Pérez made everything look effortless. His contributions were pivotal in both driving and reinventing DC’s long and rich history. George’s stories were a joy to read, and his work resonated with everyone he met. He will be missed by those here at DC and fans worldwide. pic.twitter.com/g8lMC62tK5

Perez wrote on Facebook December 7, 2021, that he had been diagnosed with stage-three pancreatic cancer a few weeks earlier. The cancer was inoperable, doctors told him, and he was given six months to one year to live. While he said he considered chemotherapy and radiation, he decided that he did not want his final days to be consumed with doctor’s appointments, treatments, hospital stays and contending with the medical system.

He also planned a final appearance to say goodbye to his fans.

He concluded his post on a positive note, writing:

Well, that’s it for now. This is not a message I enjoyed writing, especially during the Holiday Season, but, oddly enough, I’m feeling the Christmas spirit more now than I have in many years. Maybe it’s because it will likely be my last. Or maybe because I am enveloped in the loving arms of so many who love me as much as I love them. It’s quite uplifting to be told that you’ve led a good life, that you’ve brought joy to so many lives and that you’ll be leaving this world a better place because you were part of it. To paraphrase Lou Gehrig: “Some people may think I got a bad break, but today, I feel like the luckiest man on the face of the Earth.”

READ NEXT: George Perez Cause of Death: How Did the Comic Book Artist Die?