ABC "Dancing With the Stars"

Season 31 of “Dancing With the Stars” premieres on Monday, September 19, 2022, and the celebrities and professional dancers who are competing will be relying on their fans to vote them through to the next round of the competition.

There will be one elimination on the first night of the competition, so couples will be relying on the live vote to make it through to the next round.

During the episode, scores from the judges are combined with votes from viewers to decide which couple will be the one sent home at the end of the night. 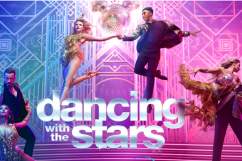 How to Vote for ‘Dancing With the Stars’ Season 31 Contestants

A post shared by Dancing With The Stars #DWTS (@dancingwiththestars)

There are two ways to vote for “Dancing With the Stars” season 31.

First, you can visit DisneyPlus.com/vote and select your favorite couple after creating an account or logging in to your existing account. No Disney Plus subscription is required to vote.

Second, you can simply text in to vote. To text to vote, text the contestant’s name to the number 21523

Here is how to vote for each celebrity:

Voting closes after the last performance of the night. There is a limit of 10 votes per person, per couple, per voting method, meaning that each person can vote for their favorite couple up to 20 times, per the rules.

All ‘Dancing With the Stars’ Season 31 Premiere Performances

Here are all the performances to expect for episode one of “Dancing With the Stars” season 31:

Loading more stories
wpDiscuz
0
0
Would love your thoughts, please comment.x
()
x
| Reply
The contestants on season 31 of "Dancing With the Stars" are relying on their fans to vote them through to the next round of the competition. Here's how.