Actor, producer, streamer, artist and winner of “Dancing With the Stars” season 25 Jordan Fisher, is bringing his positive energy to a new project in partnership with Starbucks and other content creators.

Fisher will be teaming up with filmmakers, musicians, artists, directors and more to run The Energy Makers Lab, which aims to bring positive energy to all things creative. The project comes after Starbucks announced the Starbucks BAYA Energy drink, which gets its caffeine from that found in coffee fruit.

“Feel-good energy is best when it’s shared,” Fisher said in a press release. “I’m excited to team up with Starbucks BAYA Energy to launch The Energy Makers Lab, which allows me to draw inspiration from my experiences and interests to create content that inspires and uplifts. I know our makers’ projects will create feel-good vibes and have a positive impact on those who view it.”

Heavy had the chance to speak with Fisher about the new project.

Fisher Chose to Partner With Starbucks For Authenticity 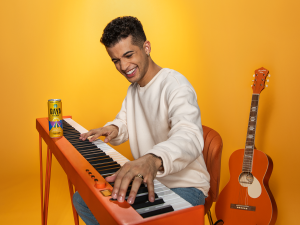 StarbucksJordan Fisher teams up with Starbucks.

Fisher told Heavy on March 9, 2022, that he chose to partner with Starbucks in particular because of their authenticity as a brand and also because he loves the product.

“I mean, for me personally, you get hit with these kinds of campaign opportunities from time to time, if things are going well, if you’re a decent enough person and kind and good to work with, and are doing decent in your life, you get some opportunities,” Fisher shared. “At some point in time, you have to be picky about who you align yourself with.”

He added that he gets Starbucks “at least once a day” in most cases.

“And then on top of that, in my streaming career, as a film producer, as a TV producer, as an actor, as an artist, as a person, as a father, as a friend, as a brother, I lead with love. I need love, and I kind of think that everyone else does too, regardless of who you are and how you do your thing,” Fisher told Heavy. “You can pretend to be the way that you want to pretend to be, but everyone needs some positivity and love and that’s what we all lead with at the Energy Makers Lab. We have been tasked in our partnership with Starbucks to bring a positive spin on something we’re really good at somehow and in some way because we all are.”

Creators on the Project Include a Musician & Artist

Creators joining Fisher on The Energy Makers Lab include Karen X Cheng, a filmmaker and VFX Specialist, Justin Vibes, a musician, Cache Bunny, a video director and VFX artist, Tommy Lundberg, a director and photographer, and Lauren Hom, an Artist.

Fisher says he’s excited to work with all of the content creators, but he’s possibly the most excited about working with Cache Bunny.

He added, “But I can make some music, and I can pretend to be other people pretty well. And I can run a company, and I can play video games at a very high level. And if I can do those things pretty well and incorporate my community and encourage everybody to lead with love and positivity, then we’re doing pretty well. And that’s what everyone else here does as well.”

Part of the project will be encouraging others to share their own content with the hashtag #EnergyMakers.

“Anybody that sees anything that comes from The Energy Makers Lab, I encourage them to go to the website as well… and let’s see what you have, what you can do, and what you can bring to the table,” he said. “We’re gonna be looking at [the hashtag]… Like, we wanna see what other people can do to add on to this project.”

He also encouraged fans to follow his social media to stay up to date on not only the Energy Makers Lab, but also for baby pictures once his son arrives later this year.

READ NEXT: ‘Dancing With the Stars’ Pro Gets Engaged

Loading more stories
wpDiscuz
0
0
Would love your thoughts, please comment.x
()
x
| Reply
Actor, producer, streamer, artist and winner of "Dancing With the Stars" season 25 Jordan Fisher, is bringing his positive energy to a new project in partnership with Starbucks and other content creators.