Kym Herjavec is a proud mom to 4-year-old twins Haven and Hudson and often shares photos of her kids on social media. The former “Dancing With the Stars” pro is enjoying being a mom and she spends as much time with her littles as possible.

In early 2022, for example, the Herjavec family took a trip to Kym’s home country of Australia with Haven and Hudson. According to the Daily Mail, the visit came a few months after Kym and her husband, Robert Herjavec, purchased a home in the Rose Bay area. Kym and her “Shark Tank” star hubby were photographed walking around Sydney’s Bondi Beach with the kids in a double stroller.

Flash forward to May 2022, and the Herjavecs took another family trip, this time to New York City. They enjoyed an outdoor meal by a pond, took in a play at the Swedish Cottage Marionette Theatre in Manhattan, and even went on a carousel, according to an Instagram post shared by Kym. 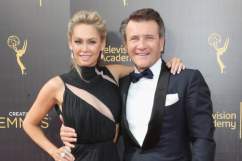 On May 31, 2022, Kym shared a picture of her with her daughter Haven that fans couldn’t get over — as evidenced by the comments section.

Kym and Haven posed in what looked like a flower shop. The mother-daughter duo were both wearing green outfits as they held hands and posed for a photo.

“Matchy Matchy,” Kym captioned the pic, adding a green heart emoji. Kym, wearing a pair of green shorts with a green button-down top and a pair of white sneakers, smiled at the camera while her daughter, in a green dress, had a hand on her hip and was giving off plenty of sass.

“Her pose and pout!!!!!!!” one person commented. Kym responded, “she’s so funny,” adding a crying with laughter emoji.

“Oh, Haven! You got this modeling/posing thing down,” another Instagram user wrote.

“Attitude and charm in one little Diva! She is so darn cute and not really a diva! You are so down to earth in raising the twins! Love the outfits,” a third person added.

“Lol her expression is everything,” a fourth comment read.

“Sassy sassy,” someone else said.

Haven Has Perfected the Hand-on-Hip Look

This certainly isn’t the first time that Haven Herjavec placed a hand on her hip and worked the camera. On May 29, 2022, Kym shared a professional photo from a shoot that they did with photographer Charlie Nunn.

In the picture, which also featured the family’s two dogs, Haven gave her best modeling pose.

“She was modeling,” Kym said in the comments section of the post. She went on to place the “blame” on hair stylist and makeup artist Glenn Nutley. In another comment, Kym wrote, “she’s giving it!!!” referring to her daughter’s pose.

She definitely has the ‘magnum’ face going on! Working that modeling at a young age !!! What a cute picture,” a fan wrote.

“Some attitude there,” someone else added.

“Come on!!! The cuteness is off the charts!!” a third comment read.