Sharna Burgess, “Dancing With the Stars” professional dancer, is pregnant with her first child alongside her boyfriend, Brian Austin Green. Green was previously married to actress Megan Fox.

Burgess did a question and answer session on her Instagram Stories on March 7, 2022, and in it, she received a question about following in Megan Fox’s footsteps.

She had quite a lengthy response to the question.

Burgess Encouraged Women to Lift Other Women Up 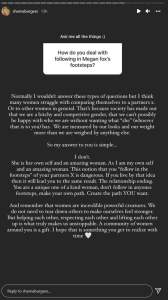 Burgess took her time in responding to the fan’s question.

“Normally I wouldn’t answer these types of questions but I think many women struggle with comparing themselves to a partner’s ex,” she said. “Or to other women in general. That’s because society has made out that we are a b****y and competitive gender, that we can’t possibly be happy with who we are without wanting what ‘she’ (whoever that is to you) has.”

She said that women are “measured by our looks and our weight more than we are weighed by anything else.”

Burgess also said she does not “deal with following in Megan Fox’s footsteps.”

“She is her own self and an amazing woman,” she wrote. “As I am my own self and an amazing woman. This notion that you ‘follow in the footsteps’ of your partners X is dangerous. If you live by that idea then it will lead to the same result. The relationship ending. You are a unique one of a kind woman, don’t follow in anyone footsteps, make your own path. Create the path YOU want.”

She said that women are “powerful creatures” who should not “tear down others to make ourselves feel stronger.”

“But helping each other, respecting each other, and lifting each other up is what truly makes us unstoppable,” she wrote. “A community of women around you is a gift. I hope that is something you get to realize with time.”

Burgess’ Pregnancy Was a ‘Surprise’

Burgess also answered questions about her pregnancy during the Q&A session.

“I was on birth control,” she wrote in the post. “We were thinking of trying mid to late this year lol. But the Universe made her own plan, found a window and went for it.”

She added, “We are big believers in everything happening for a reason. There was definitely Divine timing with this one and we are excited about it, trusting in it. We knew it was on the cards for us, so why not now. :)”

Burgess also shared details about dryer skin and acne since she’s been pregnant, as well as repeating that her due date is July 4, 2022.

“I mean of course, the whole Nation shall celebrate the birth of my first child,” she wrote in the post.

When asked if she is able to exercise the same as she could before her pregnancy, Burgess said she was.

“For the most part yes,” Burgess shared. “The further along I get I make small adjustments. Obviously I don’t lift heavy weights but I still do most of what I was doing before.”

She added, “I’ve added regular reformer Pilates to my weekly routine because of the deep core work. I want as easy a delivery and recovery as I can plan for. I know things happen, but I want to keep as strong as I can. Doing all the work to not have my abs separate is a big deal for me.”

“Dancing With the Stars” has not yet been renewed for season 31. If it does get renewed, the show will return sometime in mid-September of 2022.

READ NEXT: ‘Dancing With the Stars’ Pro Gets Engaged