“Dancing With the Stars” professional dancer Sharna Burgess took some time to answer fan questions on Instagram on March 7, 2022.

E! News reported on February 4, 2022, that the dancer is pregnant with Green’s baby. Green has three children, Journey River, 5, Bodhi Ransom, 7, and Noah Shannon, 9, with his ex-wife Meghan Fox, and a son, Kassius, 19,  with Vanessa Marcil.

Burgess is pregnant for the first time, and she has never been married. The couple appeared together on season 30 of “Dancing With the Stars” after announcing their relationship.

Burgess Said Her Pregnancy Was a ‘Surprise’ 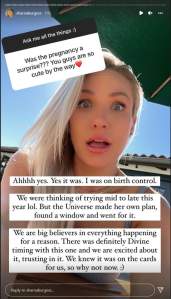 In the Q&A session on her Instagram Stories, Burgess shared that her pregnancy was a “surprise.”

“I was on birth control,” she wrote in the post. “We were thinking of trying mid to late this year lol. But the Universe made her own plan, found a window and went for it.”

She added, “We are big believers in everything happening for a reason. There was definitely Divine timing with this one and we are excited about it, trusting in it. We knew it was on the cards for us, so why not now. :)”

Burgess also shared details about dryer skin and acne since she’s been pregnant, as well as repeating that her due date is July 4, 2022.

“I mean of course, the whole Nation shall celebrate the birth of my first child,” she wrote in the post.

Burgess is Keeping Up Her Fitness Routine

In the posts, Burgess also talked about what she has been able to do for her fitness routine since learning she was pregnant. When asked if she is able to exercise the same as she could before her pregnancy, Burgess said she was.

“For the most part yes,” Burgess shared. “The further along I get I make small adjustments. Obviously I don’t lift heavy weights but I still do most of what I was doing before.”

She added, “I’ve added regular reformer Pilates to my weekly routine because of the deep core work. I want as easy a delivery and recovery as I can plan for. I know things happen, but I want to keep as strong as I can. Doing all the work to not have my abs separate is a big deal for me.”

“Been doing all of the above before pregnancy and continuing during,” she wrote. “Ladies… if you do not do pelvic floor exercises you are doing yourself an injustice. Not only for your future health but also your current and future sex life. Just saying.”

Burgess also recently shared a baby bump photo for her 23-week mark in her pregnancy, sharing that she now does not like Kombucha and is extra emotional, crying at certain commercials and every time she opens up baby gifts.

“Pregnancy is wild, and I am loving every second of watching observing and admiring the magic that is happening,” she wrote. “Even when it’s hard. There is a freaking HUMAN growing inside of me. He’s gonna have a whole life, hopefully a beautiful one and I will have brought him into this world. My body is doing things all on its own, making space and getting him what he needs.”

“Dancing With the Stars” has not yet been renewed for season 31. If it does get renewed, the show will return sometime in mid-September of 2022.

Loading more stories
wpDiscuz
0
0
Would love your thoughts, please comment.x
()
x
| Reply
"Dancing With the Stars" professional dancer Sharna Burgess shared more details about her pregnancy, including if it was a surprise for her.