Val Chmerkovskiy, a fan-favorite “Dancing With the Stars” professional dancer, called out his fellow Eastern European dancers for not speaking out about Russia’s invasion of Ukraine.

Val’s brother, Maksim Chmerkovskiy, is currently stranded in Kyiv, Ukraine. Maksim, also a dancer, was in the country filming the Ukrainian version of the show “World of Dance.” Maks’ wife, professional dancer Peta Murgatroyd, and their son, Shai, are at home in Los Angeles.

He has been giving social media updates but has had a harder time keeping it together in his videos. In his February 27 video, Maks said that he has been safe but is “in the eye of the storm with an insane proximity” to the violence.

Maks and Val are natives of Ukraine. 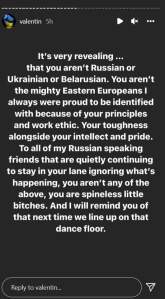 In his own Instagram Stories, Val called out many other dancers for not using their platforms to speak out about the invasion.

“And on another note, I’m going to try really hard to forgive and understand the silence of all my Russian speaking friends, my coworkers, and specifically the dancers that have competed, trained, and visited the cities they are watching burn, along side the Ukrainians that are now taking up arms to defend them,” Chmerkovskiy wrote in one slide.

On another, he wrote, “It’s very revealing … that you aren’t Russian or Ukrainian or Belarusian. You aren’t the mighty Eastern Europeans I always were proud to be identified with because of your principles and work ethic.”

He specifically went on to call out his Russian colleagues and friends, including professional dancers Artem Chigvintsev, who is from Izhevsk, Russia; Sasha Farber, who was born in Moscow; Gleb Savchenko, who is from Moscow; and Pasha Pashkov, who is also from Russia.

Savchenko has not shared anything, and Farber has not directly posted, but he reshared a post that includes information on where to get help for Ukrainian refugees.

People on Reddit threads about the subject have speculated that the Russian pros have stayed quiet out of fear for their families in Russia.

“To all my Russian speaking friends that are quietly continuing to stay in your lane ignoring what’s happening, you aren’t any of the above, you are spineless little b****es. And I will remind you of that next time we line up on the dance floor,” Val wrote.

Later, he added that he was aware some people were terrified of speaking up.

“But I don’t think there will ever be a better time to rise up. This is unfortunately the perfect time to finally change things. For yourselves. Your futures,” he wrote.

Val Thanked His Followers for Speaking Out

Val later uploaded videos thanking his followers from around the world who are speaking out about the crisis, especially the people who are not directly affected by it.

He said that it’s OK to be silent to a certain extent, “but your tone deaf posts are what’s really insulting my intelligence.”

Loading more stories
wpDiscuz
0
0
Would love your thoughts, please comment.x
()
x
| Reply
"Dancing With the Stars" professional dancer called out some of his coworkers on Instagram.