Getty Dave Grohl performed his 23-minute instrumental "Play" live for the first time on December 8 during a Christmas festival in Asheville, North Carolina.

The Foo Fighters were honored at MTV’s 2021 Video Music Awards as the first-ever winners of the Global Icon Award. The award celebrates “an artist/band whose unparalleled career and continued impact and influence has “left an indelible mark” on the global musical landscape and “continues to influence, inspire, and evolve,” according to a press release posted by MTV.

Foo Fighters consists of Nate Mendel on bass, Taylor Hawkins on drums, Pat Smear and Chris Shiflett on guitar, and Rami Jaffee on keyboards, but it’s frontman Dave Grohl who started it all as a one-man project nearly 30 years ago.

Grohl has not only performed lead vocals on the band’s hit songs such as “Big Me,” “Learn to Fly,” “Everlong,” and “The Sky is a Neighborhood,” but he was the band’s only member — playing every instrument and singing all vocals — on the Foo Fighters self-titled debut album in 1995.

Rock fans first met Grohl when he was a member of the Seattle grunge band, Nirvana, in the early 1990s. He pounded the drums on the band’s MTV-ready hits, including “Smells Like Teen Spirit,” “In Bloom,” and “Heart-Shaped Box,” and famously appeared alongside frontman Kurt Cobain on MTV’s Nirvana “Unplugged,” where the group opted to play covers of other bands’ songs instead of their own best-known hits.

“We’d seen the other ‘Unpluggeds’ and didn’t like many of them, because most bands would treat them like rock shows—play their hits like it was Madison Square Garden, except with acoustic guitars,” Grohl explained to The Ringer.

Five months after the “Unplugged” performance, Nirvana was forced to disband in the aftermath of Cobain’s death. According to Loudwire, Grohl was soon invited to join Tom Petty’s band, The Heartbreakers,  after jamming with the long-standing band on “Saturday Night Live.”

“We played ‘SNL‘ and afterwards [Petty]  basically was like, ‘Man that was good and it’d be a shame if that’s the only time we do it,’” Grohl said on Howard Stern’s radio show. “And then he called me at home and he was like, ‘If you want, here’s how we do it. You get your own bus and we don’t tour too hard and blah, blah, blah.’ He was explaining if you’re into it, come out and let’s do it for a little while.”

Grohl then revealed that he was already working on demos that would ultimately become his first Foo Fighters album.

“I had just started doing this thing and I just felt weird going back to the drums because it reminded me of being in Nirvana and it just would’ve been sad for me personally,” Grohl admitted. “It would’ve been an emotional thing to be behind the drum set every night and not have Kurt [Cobain] there, so I was like, ‘Nah, f*** it. I’m gonna try this other thing.”

Grohl Is a Family Man & Is Close to His Mom 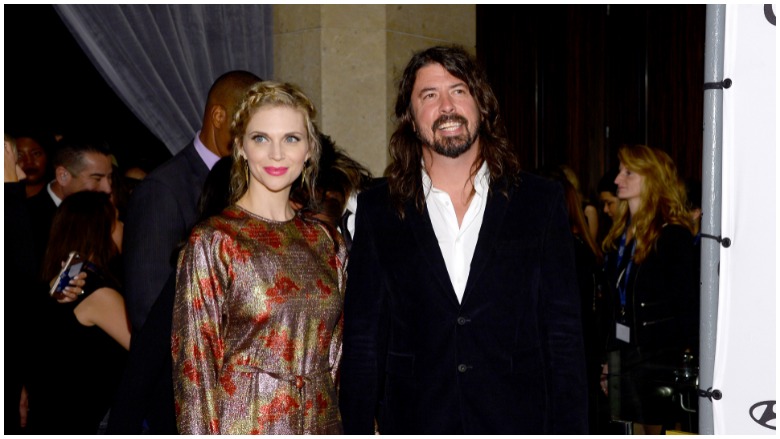 Despite his earlier days as a hard-partying and hard-touring rock star, Grohl is a family man. The 52-year-old rocker is married to director and producer Jordyn Blum, and they share three daughters ― Violet, Harper, and Ophelia. according to the Huffington Post.

Grohl once said that he used to tour “nine months out of the year,” but once he became a dad he didn’t want to be away from his kids for more than 12 days at a time.

The rocker is also mama’s boy. In 2021, he and his mom, Virginia Hanlon Grohl, appeared together in the Paramount+ docuseries, “From Cradle to Stage,” in which they met up with other moms and their successful, musician kids.

“I believe that the relationship between a musician and their mother is so important because it’s the foundation of their understanding of love, which is surely every artist’s greatest muse,” Grohl said in a press release for the series, which he also directed, per Pitchfork.

In addition to his groundbreaking MTV Global icon Award, Grohl has won 16 Grammy Awards over his long career, according to Grammy.com.