Demi Moore and Mila Kunis appeared together in an ad for Super Bowl 2022. Most people know they share Ashton Kutcher in common; Moore is his ex-wife, and Kunis is currently married to Kutcher, with whom she has two children.

You can watch the commercial later in this article.

It pokes fun at Kunis and Moore for going to high school together. But did they really attend the same high school? Yes. According to Classmates.com, Moore attended Fairfax High School in West Hollywood, California, before dropping out to become a model.

The ad starts with a man at a podium saying, “And now for our high school’s most-admired alum.” The camera pans to show Kunis sitting at a table with friends, who tell her to “get up there.” She mutters, “This is so embarrassing. Guys, don’t make a scene.” A friend says, “Please, you love a scene.”

The camera then pans to another table, where Demi Moore is sitting. “There’s no way it’s me,” she says. “Is that good acting.” A friend says, “That’s why it’s you.”

The announcer says, “You know her. You love her,” as both Moore and Kunis make their way to the stage. “And you wish you could be her.”

Kunis makes it to the stage and says, “What are you doing here?”

The announcer then gives the award to “Anna Gomez,” another woman in the audience. She is introduced as “our first gigillionaire.” Audiences are told she has AT&T Fiber, which gives her the “fastest Internet with hyper gig speeds.”

“I had no idea that we went to the same high school,” says Moore. “We have a lot in common,” says Kunis. 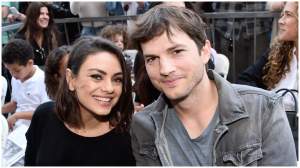 Kutcher and Kunis recently sold the home where they had lived together since 2014, according to Architectural Digest.

The January 2022 story says that the couple share 7-year-old daughter, Wyatt, and a 5-year-old son, Dimitri, and they “currently live in a custom-built, sustainable modern farmhouse.”

“We wanted the house to look like an old barn, something that had been here for decades, that was then converted into a house. But it also had to feel modern and relevant,” said Kutcher, according to Architectural Digest.

“It is with great sadness and a heavy heart that I have decided to end my six-year marriage to Ashton,” Moore said to CNN.

Kutcher tweeted that day, according to Reuters, “Marriage is one of the most difficult things in the world and unfortunately sometimes they fail.”