DMX made Baby Gaga’s list of rappers with the most children, alongside WuTang’s Ol’ Dirty Bastard, who fathered 13 kids before he died, and Moneybagg Yo, who has at least eight kids, according to the report.

According to Rolling Out, the rapper had two children with his ex-girlfriend Yadira Borrego and one with Monique Wayne. Not much is known about his other kids. As for whether or not all of DMX’s kids know one another, he said that some do and others don’t.

“Some of them have met others. I ain’t a total piece of sh*t. I ain’t have kids in the same county. Yeah, I slipped up. I got a few in New York; I got a few in Cali,” DMX previously said, according to Rolling Out.

For the most part, DMX’s kids stay completely out of the spotlight.

DMX Had 4 Kids With His Ex-Wife Tashera Simmons

DMX and his ex-wife Tashera Simmons had four kids together.

Xavier Simmons seems to be following in his dad’s footsteps in the entertainment world. According to his Instagram, he “made a movie.” He also has photos of himself in the studio with his dad, like the one above.

Tacoma Simmons is a musical composer, according to Instagram.

Tashera filed for divorce in 2013 after 11 years of marriage. According to All HipHop, the divorce was settled in 2016.

“The former couple has been battling in court over property, child support payments, and financial issues since their split,” the site reported at the time.

In an interview with Essence back in 2012, Tashera opened up about the split.

“I do still feel bad about getting a divorce, even after everything X put me through, because I took my vows very seriously. And I know X is never going to love anyone the way he loves me, and I feel the same way about him,” she told the outlet. “But [there] just comes a time when you give your all, and you know you gave your all, and it’s just time to move on,” she added. 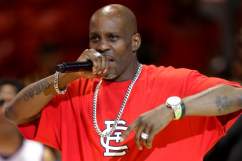 DMX and his longtime girlfriend, Desiree Lindstrom, welcomed their first child together in 2016. Lindstrom shared the news on Facebook at the time, writing “I am so in love with his little feet thank u God,” according to Entertainment Tonight. Lindstrom and DMX named the child Exodus. You can see a photo of Exodus here.

Lindstrom gave birth to the child in New York City, according to TMZ. DMX was in Arizona at the time of the baby’s birth, but told the outlet that his son was a “blessing.”

According to the Daily Mail, DMX and Lindstrom got engaged on their son’s birthday in 2019. Photos on her Facebook page suggest that the two are still together in 2021. On March 27, she shared photos from a night out with friends. It’s unclear when the photos were taken, but she did pose with DMX in one of the pics, and she appeared to be wearing a ring.

READ NEXT: Possible Last Video of DMX Posted by His Fiancee Days Before His Overdose