While going through a divorce battle with his wife of over two decades, Dr. Dre has addressed their drama on an unreleased track. In a snippet of a song by KXNG Crooked, Dr. Dre, born Andre Romelle Young, addressed his soon-to-be ex-wife Nicole Young and the recent developments in their divorce case. In in the lyrics, the Aftermath Entertainment CEO called Young greedy for asking for $2 million in spousal support and accused her of telling lies about him in court.

On the song, Dr. Dre raps: “Trying to kill me with them lies and that perjury/ICU, I see you tryna f*** me while I’m in surgery/ Greedy b****, take a pick / Girl you know how money get/You know we don’t tolerate that nonsense/By any means get your hand out of my pocket.”

While hospitalized for a brain aneurysm, Dr. Dre agreed to pay Young $2 million in temporary spousal support until April 2021 and $500,000 in attorney fees, Entertainment Tonight noted. According to TMZ, Young initially requested monthly spousal support of over $1.9 million for expenses that include: 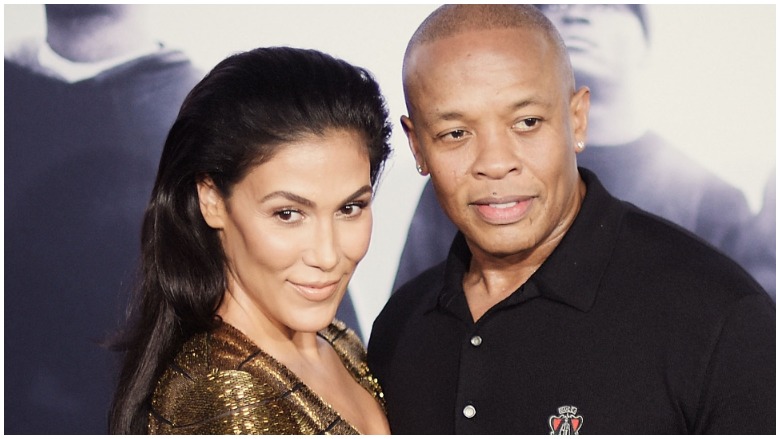 After filing for divorce in June 2020, Young accused the hip-hop mogul of abusing her during their 24-year marriage. In court documents obtained by Entertainment Tonight, Young claimed that Dr. Dre “verbally and emotionally decimated my personhood to the extent that I currently suffer from post-traumatic stress syndrome.”

“I have also offered extensive and painful testimony about Andre’s relentless campaign of abuse and control over me for more than half of my life,” read court documents. “It is misleading, revolting and insulting for Andre to suggest that I have not been abused because, as a victim of relentless abuse and isolation, I did not create and maintain a contemporaneous record of abuse inflicted on me.”

According to People, Young accused the “Next Episode” rapper of slamming her “up against a wall and lifted me off the floor by my neck” in September 1995, holding a gun to her head in 2000 and 2001 as well as punching her in her head and face and said she was “hiding from his rage” during an angry outburst in 2016 when he kicked down a bedroom door.

Young also explained why she didn’t call police when she was abused during their marriage in court documents obtained by People.

“During our marriage, I considered calling the police several times; but, as I fell deeper in to the abusive relationship, my fear of Andre outweighed any confidence I had that the police could help me.”

Dr. Dre is Rumored to be Dating Apryl Jones

In February 2021, Dr. Dre was seen on a date with Love & Hip Hop Hollywood star Apryl Jones. According to Page Six, Jones and Dr. Dre were seen leaving dinner at the BOA Steakhouse in Los Angeles, California. Neither Jones or Dre has confirmed or denied the dating rumors.

Moniece Slaughter, who previously starred on Love & Hip Hop Hollywood, claimed that they have been dating for awhile.