Today, Eminem’s mother is 67 years old and largely keeps out of the public eye. Eminem reached out to his mother in a 2014 music video. The lyrics for that song said they were still estranged but, in it, he apologized and indicated he wanted to repair their relationship. He put the blame for his tough upbringing on his absent father in that song. Eminem’s father died in 2019.

“But I’m sorry mama for ‘Cleanin’ Out My Closet,’ at the time I was angry,” Eminem wrote in the song. It’s called “Headlights.”

The lyrics say, in part:

I went in headfirst, never thinkin’ about who, what I said hurt
In what verse, my mom probably got it the worst
The brunt of it, but as stubborn as we are, did I take it too far?
“Cleanin’ Out My Closet” and all them other songs
But regardless, I don’t hate you ’cause, Ma
You’re still beautiful to me, ’cause you’re my Ma

According to the Sun, Eminem forgave his mother in 2013.

Debbie has continued to have a tough life. In 2006, Eminem paid his mother’s medical bills. Then named Debbie Mathers-Briggs, she was suffering from “stage four breast cancer,” according to The Irish Examiner, which reported she wanted to repair her relationship with her son even back then.

Despite her breast cancer diagnosis, Eminem’s mom today is still alive, not dead.

Debbie Has Been Married Several Times

Eminem’s mother was born in Missouri and had Eminem when she was only 15 years old, according to The Sun; Marshall Bruce Mathers II, Eminem’s father, abandoned the family when Eminem was young. Debbie had many jobs and raised Eminem in poverty near Detroit, Michigan.

Debbie married a man named John Briggs and has three grandchildren, according to The Sun. The Famous People reports that she opened a taxi service in her hometown of St. Joseph, Missouri. Online records in 2022 do show her with a P.O. box in St. Joseph, Missouri, and Ancestry.com records show her living in St. Joseph as recently as 2019. Online records also show her affiliated with a classic cab and limousine company. Records give John Briggs’ address in different communities throughout Michigan, including Warren, where Debbie raised Eminem.

It’s not clear whether Debbie Nelson and John Briggs are still married. 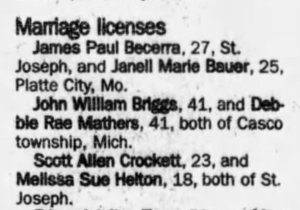 A wedding announcement obtained via Newspapers.com, shows that Debbie Rae Mathers married John Williams Briggs in about 1998, according to the St. Joseph News Press.

Debbie has a son named Nathan Kane Mathers with another man. He is Eminem’s half brother.

According to Celeb Suburb, Debbie was also married to Eminem’s dad; a man named Curt Werner (this was a young marriage, and it was annulled); and a landscaper named B.J. That marriage was also short-lived.

Eminem & His Mother Have Had a Famously Conflictual Relationship

According to CheatSheet, some of his most famous lyrics trolled his mother. In “Cleaning Out My Closet,” he explained,

Now I would never diss my own momma just to get recognition. Take a second to listen for who you think this record is dissing but put yourself in my position. Just try to envision witnessing your momma popping prescription pills in the kitchen, B——- that someone’s always going through her purse and s—- missing, going through public housing systems, victim of Munchhausen’s Syndrome. My whole life I was made to believe I was sick when I wasn’t ‘til I grew up, now I blew up. It makes you sick to ya stomach. Doesn’t it?

According to ABC News, Eminem’s mother once famously sued her son for defamation, but it didn’t make her rich. A judge ruled she would only get $1,600 out of a $25,000 settlement in her favor after attorney fees were calculated.

In 2008, Mathers, then known as Debbie Nelson, released a book called, “My Son Marshall, My Son Eminem: Setting the Record Straight on My Life as Eminem’s Mother.” It’s still available on Amazon, which describes the book as: “Fact and fiction separated in the story of the world’s most famous rapper told by the one woman who knows him.”

She also recorded a song that gave her side. It’s called “Dear Marshall.”

How Old Is Eminem? 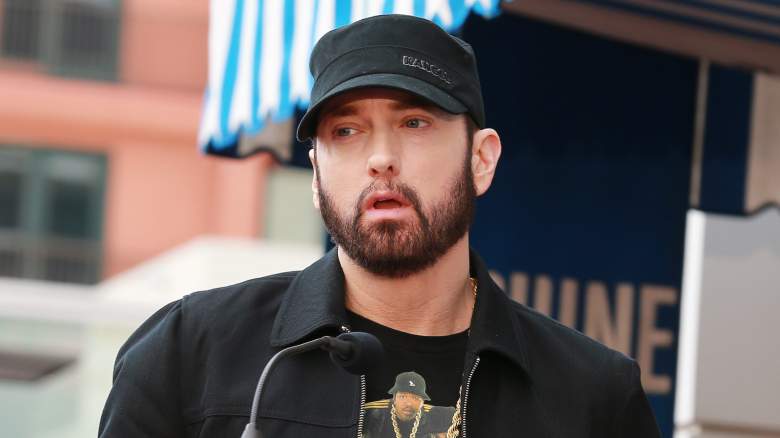 Here’s a reminder of how Eminem looked when he was young. 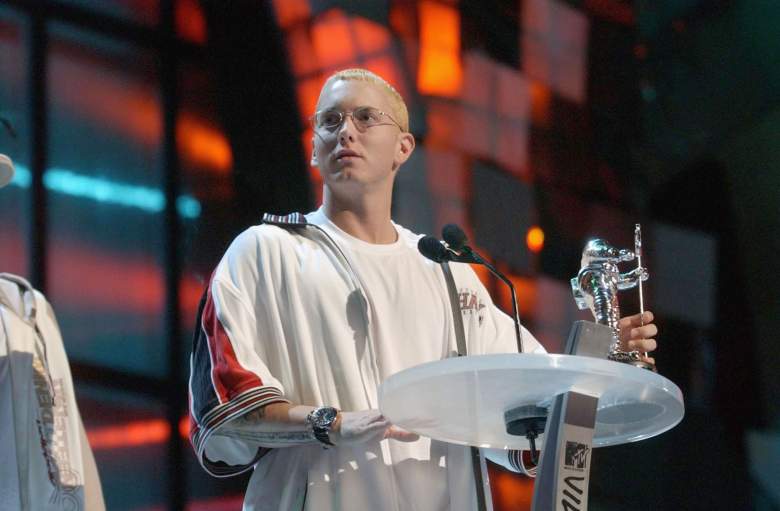 GettyEminem accepts the award for Best Video From A Film during the 2003 MTV Video Music Awards at Radio City Music Hall on August 28, 2003 in New York City.

According to Biography.com, Eminem was born Marshall Bruce Mathers III in Missouri, but he was raised in Warren, Michigan, near Detroit. His troubled childhood was prominently featured in his music and the movie based on his life, “8 Mile.”

The Slim Shady LP, the first album that broke through, was released in 1999, Biography.com reported.