In 2018, Hallmark premiered a new spring movie, Royal Matchmaker, which airs an encore at 12 p.m. Eastern on April 3. It’s about a struggling NYC matchmaker who’s hired to find a match for the king of Voldavia. But where was the movie really filmed? And can you visit the castle? Read on to learn all about where this movie was filmed and how you can visit some of the locations yourself.

According to IMDB, Royal Matchmaker was filmed in Romania, including Bucharest and Sinaia. This is also where Royal Hearts, another recent Hallmark film about royalty, was shot. In an interview with Hallmark, Joy Lenz said that the filming location was like a “fairy tale village.” “It’s real old, so beautiful,” she said. She and co-star Will Kemp first met when they were flying to the filming location from London, she said. You can watch the entire interview below.

They filmed in the winter, she said, and the weather varied from being beautiful and being rainy and cold. “It looks like something Disney would create,” she said. They shot in a ski town called Sinaia, she said. During downtime in Romania, Lenz said that she got to visit Dracula’s castle in Romania. “It looks a lot like Winterfell,” she said.

Sinaia is a mountain resort in Prahova County, Romania. It’s named after the Sinaia Monaestery of 1695 (and the monastery is named after the Biblical Mount Sinai.) Sinaia is a popular destination for skiing, hiking, and just getting away. Tourist landmarks include the Peles Castle, Pelisor Castle, Sinaia Monastery, the train station, and the Franz Joseph and Saint Anne Cliffs.

Viewers are saying that the Peles Castle is where Royal Matchmaker‘s castle scenes were filmed. Do you agree? Here’s what the Pelese Castle looks like:

Lenz was very excited about the opportunity, sharing her passport for the film:

And here’s a recording she made while filming in Bucharest:

And check out the castle:

It’s unusual for Hallmark to film a movie on location. Most of the channel’s movies are filmed in Canada, even if the stories themselves take place in the United States. But Royal Hearts and Royal Matchmaker are big exceptions to that rule. Possibly James Brolin’s role in Royal Hearts helped make all of that happen. That movie came out the way it did partially because he negotiated for specific filming locations, Telegram reported. Whatever the reason, we’re grateful for the beautiful movie and the stunning scenes. 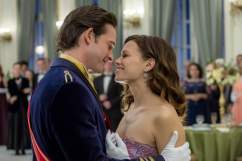 Hallmark’s ‘Royal Matchmaker’: Learn All About the Cast & the Movie

Loading more stories
Where was Hallmark's Royal Matchmaker filmed? It was in an exotic location this time. Learn more here.