Hallmark’s third summer-themed movie of 2018, Pearl in Paradise, was filmed on location. You won’t see exotic animals like you did when you watched Love on Safari, but you will see some absolutely gorgeous ocean views and beautiful scenery, just like you did during A Summer to Remember. In fact, Pearl in Paradise and A Summer to Remember were filmed in the same area!

Pearl in Paradise was filmed on location in Fiji, just like A Summer to Remember, which aired two weeks ago. The movie was filmed mostly on the island of Viti Levu in Fiji. The synopsis for the movie reads: “Alex, a photographer for a travel magazine, and Colin, a best-selling author, team up to find an elusive Fijian pearl. As both of their careers hang in the balance, their treasure hunt in a Fijian valley might lead them to find the only treasure that really matters.” So yes, just as the storyline takes place in Fiji, the movie was actually filmed in Fiji too.

Filming on location wasn’t cheap. The budget for this movie was $2.5 million, MaiLife reported. Pearl in Paradise was filmed in May, while A Summer to Remember was filmed in Fiji in April.

Jill Wagner told MaiLife that she loved filming in such an exotic place. “This is my first trip to Fiji and I love it. The people are gorgeous…everybody is welcoming. From a scale of one to 10, I’d say 20. The place is so romantic.”

@hallmarkchannel USA recently caught up with @JillWagner, the lead actress in "Pearl In Paradise" that filmed in Fiji earlier this year. Find out what she loved about Fiji & what she would take home with her. For the full interview, find us on Facebook. #FilmFiji #PearlInParadise pic.twitter.com/xg370ZSuRf

Kristoffer Polaha, who also starred in the movie, told My Devotional Thoughts: “If you ever get a chance to go to Fiji, you’ve gotta go because it’s just something that…it’s not Hawaii. It’s not like the things that we North Americans know… Fijians have their own culture and their own identity. And they break into song at any given moment. I mean, literally. I was having dinner at a restaurant, and all of a sudden, the wait staff–the people working at the restaurant–started to sing, and it was just this beautiful song. It was a Christian worship song. We were in the middle of a regular old restaurant, and it just happened to be a song that they all sang in church. I guess. Then they have this Fijian traditional goodbye song that they sing to people when they leave the island, and it’s just so sad and haunting and beautiful. It’s a really cool place.”

Polaha added that while A Summer to Remember stayed on the resort a lot, this movie explores all different parts of Fiji, including a river, waterfalls, the jungle, and many other beautiful locations.

The movie was filmed in many locations. One of them was the Pacific Harbour golf club, MaiLife reported. IMDB lists Viti Levu, Fiji as one of the locations for filming (which is where Pacific Harbour is located.) Trip Advisor reviews refer to this golf course as amazing and challenging (but some reviews believe that it needs a little extra TLC to bring it back to its former glory.)

One major location for filming was The Pearl South Pacific Resort in Fiji (which is where the golf club is located.)

According to its website, the Pearl Resort is located between Suva and Nadi on the Pacific Harbour. The website describes the resort this way: “Come and leave the frenzied world far behind. Set by the beach and surrounded by lush tropical landscapes, The Pearl Resort is an idyllic escape where chic accommodations, exquisite cuisine and relaxation required await you. Just some of the features on offer include an 18 hole golf course, swimming pool with swim-up bar, The Pearl Spa, white water rafting, game fishing, world famous shark diving, snorkeling, jet ski safari and surfing at Frigates Passage. The Pearl Resort is the perfect location for a romantic Fiji wedding… Here at The Pearl Resort you will find the true meaning of paradise as you refresh, renew and indulge in world-class facilities and exceptional service.

Here’s where the resort is located:

Another location, Polaha told My Devotional Thoughts, was the Navua River, where the crew filmed even during rain and having to walk through deep mud. “This is hardcore,” he said admirably about the filming crew.

The Navua River is on the island of Viti Levu in Fiji. Traveller.com refers to rafting down the Upper Vanua River on the island as “Fiji’s best-kept secret.” It’s described as one of the most pristine rivers in the South Pacific.

Here are some more behind-the-scenes photos:

They spent some time with Cloudbreak in Fiji too.

Do you want to visit Fiji after seeing this movie? 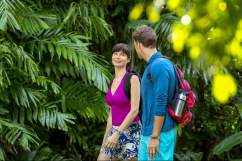 Where Was Hallmark’s ‘A Summer to Remember’ Filmed?

Loading more stories
Was Hallmark's Pearl in Paradise really filmed in Fiji? Find out all the details here, including how you can visit some of the same locations.