Candace Cameron Bure took to social media to share her thoughts about the Uvalde, Texas, school shooting, along with opening up about why she hadn’t posted anything on the topic right after it happened. 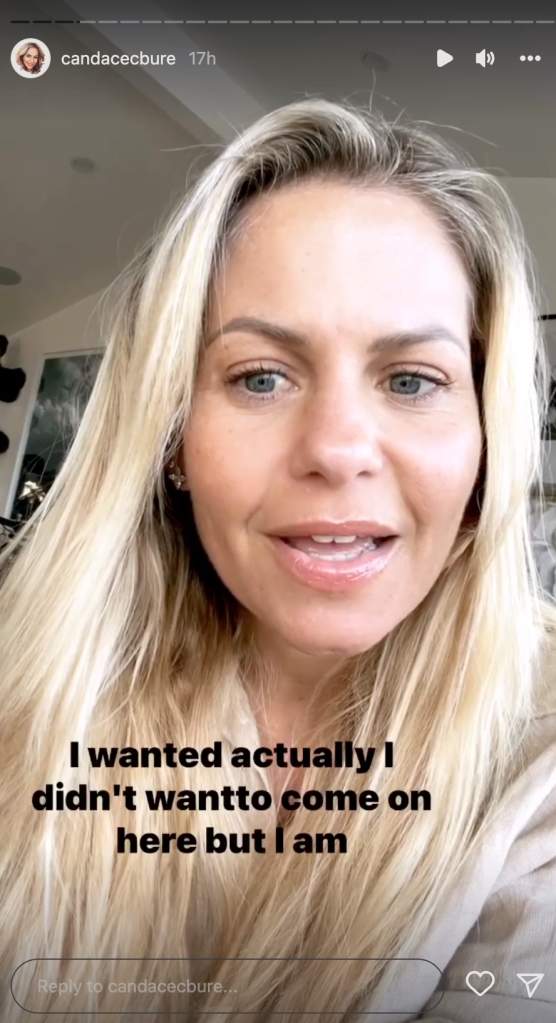 On May 26, Bure posted her thoughts on her Instagram Story, addressing people who had questioned why she hadn’t posted anything on social media about the shooting yet. First, she shared that it takes her longer to process tragedies, and social media isn’t always the first place she wants to go to share her thoughts.

“Hi friends… Actually, I didn’t want to come on here but I am because … seeing what happened in our country, all of us process things differently,” she said on her Instagram Story. “And some of us need more time to process it. Some of us are ready to scream and yell and shout from the rooftops. Some of us need to just feel more and figure out when we feel ready to share those feelings. I am a deep feeler and I don’t always feel like social media is the place I want to run to first to share my heart, particularly when it’s grieving. And so that’s why I’ve been silent.”

She Said She Doesn’t Want to Pour Out Her Heart, Only to Have People Nitpick Over Her Words 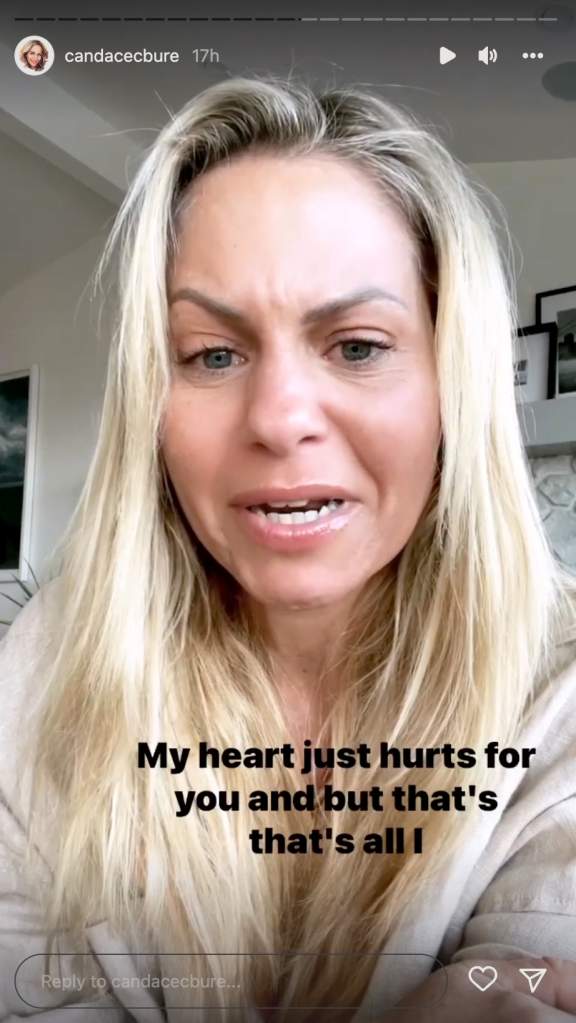 She continued, sharing that it’s best not to make assumptions about why someone might be silent. She added that she’s pulling away from social media more recently when it comes to topics involving tragedies, grieving, or politics.

“I don’t think it’s right to jump to conclusions or assume or judge someone for their lack of posting,” she said. “I don’t believe silence or lack of posting is a representation of what someone is thinking, feeling, or doing. And the more and more I have this relationship with social media, there are things I love about it, but there’s a lot that I really am pulling away from. And that is sharing certain things, particularly when it comes to tragedy, grief, politics. And a lot of social issues that our country disagrees on.”

She continued, sharing: “I don’t want to pour my heart out and my opinion just for people to nitpick over it. And by nitpick I mean over the words. Obviously, there’s going to be disagreements and arguments, but sometimes it’s like you just want to share a positive message, and there are people that are still going to tear it apart.”

‘As a Mother, I Grieve…With the People of Uvalde,’ She Said 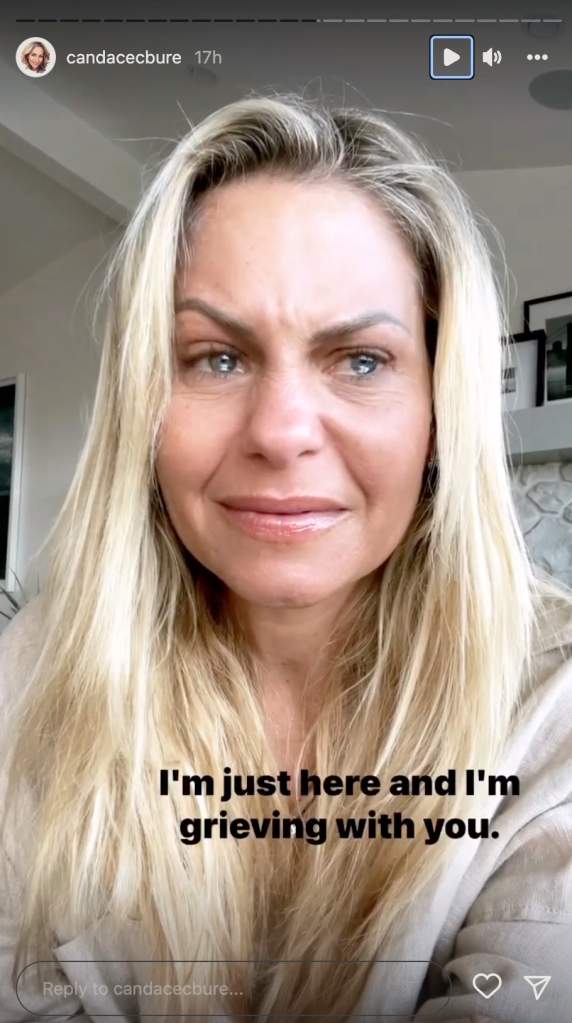 Bure went on to say that as a mother, she was grieving deeply over the Uvalde shooting, but she’s not ready to share more yet about her feelings. Her eyes filled with tears as she shared how much she was grieving over the shooting.

“With the tragedy and the loss of those 21 people, that is so hard,” she said on her Instagram Story. “And as a mother I grieve and I just want to grieve with the people of Uvalde and the families. My heart just hurts for you, but that’s all I want to say on social media right now. I’m just here and I’m grieving with you.”

She added that she’s also grieving over the other shootings, including Buffalo.

“I know some of you are going to say, well there was a tragic event that happened at Buffalo at the supermarket, and I’m grieving those people too,” she said in her Instagram Story. “Just some of us don’t always feel comfortable to have to post everything. And that’s all there is to it. I’m not trying to make this about me. I’m just trying to share feelings … I don’t want to have to feel like I have to post it for me to acknowledge my feelings or do what I’m doing, or to take action. A post isn’t confirming that. Or a lack of posting.”

“My social media gal who helps post a lot of things even texted me yesterday, ‘Do you want me to put up a graphic?’ And I thought no. Like, what’s a graphic gonna do? I just need to feel this first,” she said. “I mean, I would love to post a picture of all those little beautiful faces so we remember them and we remember to pray for their families too. But I just have to do that when I’m ready to do that.”

She said she felt like she was oversharing to a degree, but she knows that some people feel the same way as her. She added that she hopes others will remember not to be angry when people don’t post as quickly as they think they should.

“[I] also want to say don’t be mad when you … you feel like people should be posting and they’re not meeting your expectation,” she said. “It’s not about you. It’s not. Everyone processes differently. So let us process how we need, take action when we’re ready and willing and wanting to, and speaking up when we feel led to. But just know that I’m such a prayerful woman…”

She added a final addendum, sharing that some of her marketing posts are filmed in advance and shared according to a pre-set schedule. So just becuase her account might post something after a tragedy, it doesn’t mean that she personally posted it or filmed the video on that day.

“You’ll see other posts like I’m talking about Dr. Lancer or you’ll probably see Dayspring… Those are all scheduled posts, so they still just run,” she said. “…I’m not actually filming them that day, and I’m not even posting them. I have people that help post those things. So just take social media with a grain of salt, and realize it’s not always in real time at that very moment.”

Very Well said Candace. This whole thing is so Sad. I pray for All the Families that have suffered from All these Senseless Shootings. God is watching over all of them now.

Loading more stories
wpDiscuz
1
0
Would love your thoughts, please comment.x
()
x
| Reply
A tearful Candace Cameron Bure opened up on social media about why she was silent at first after the Uvalde, Texas, shooting.