Tis the season! With the holidays around the corner, HGTV has announced its seasonal lineup featuring seven fan-favorite shows, annual specials and even a new competition series.

“Fans who love our home-inspired series and have a passion for holiday-themed programming won’t be disappointed because this season we’ve pulled out all the stops to deliver colorful, holiday decor and peeks inside the decked-out homes of our popular stars,” the President of HGTV and Streaming Home Content for Discovery, Jane Latman, said in a press release. “It doesn’t matter what platform you choose, you can curl up on the couch with your family and watch or stream the type of holiday fare that makes you feel good all over.”

Most of the programming will also be available on discovery+ through its Holiday Central Hub.

WHO IT STARS: David Bromstad, the star of “My Lottery Dream Home,” joins forces with his sisters Dyonne and Dynelle

WHAT THE SHOW IS ABOUT: The sibling trio will transform Bromstad’s new Orlando, Florida home into “an over-the-top winter celebration” ahead of his holiday party, HGTV revealed.

They “will draw inspiration from their Scandinavian heritage to transform the home with an astonishing 70 decorated indoor trees, dozens of cheerful gnomes and rustic faux wood beams,” the press release continued. “They even repurpose gift bags and boxes to create a do-it-yourself advent calendar on the staircase.”

WHAT THE SHOW IS ABOUT: HGTV’s new extreme tabletop competition will feature a holiday episode. The contestants – all vying for the season’s $50,000 prize – “will create an over-the-top ‘winter wonderland’ themed table and dining environment in just eight hours,” according to the announcement.

It revealed that among the “over-the-top” designs are “a creative multi-level Antarctica-inspired glacier, a breathtaking Christmas tree suspended from the ceiling, and a winter engagement in Paris.”

WHO IT STARS: Ben Napier, the star of HGTV’s “Home Town” and “Home Town: Ben’s Workshop”

WHAT THE SHOW IS ABOUT: Napier is pairing with two celebrity duos in his holiday episode.

“Deadliest Catch” stars Captain Sig and his daughter Mandy Hansen will work with the master woodworker “to make special wood creations just in time for Christmas, including a brand new mantle for the workshop that honors the Hansens’ Norwegian heritage,” the announcement revealed. Napier’s wife Erin will work with Hansen to give the shop “a seasonal overhaul.”

Napier will then work with the famous dancing spouses – Stephen “tWitch” Boss and Allison Holker Boss – “to build an interactive wall display for a local children’s center play space,” HGTV announced. They will partner with Erin to “deck the halls of the children’s center” ahead of a celebration.

WHO IT STARS: Albie Mushaney, who HGTV described as an “Oregon-based real estate agent, world-famous strongman and well-known Santa impersonator”

WHAT THE SHOW IS ABOUT: Mushaney is “on a mission to spread Yuletide cheer,” according to HGTV. To do so, the network revealed he will work with clients to find “their forever home” before the holidays and transform the houses “into spectacular holiday wonderlands with fully trimmed trees, sparkling lights and boughs of holly.”

HGTV added that each client will also receive “a special surprise that makes the season extra merry and bright.”

WHO IT STARS: “Fixer to Fabulous” hosts and real-life couple, Dave and Jenny Marrs

WHAT THE SHOW IS ABOUT: The husband and wife duo will renovate their local Bella Vista Animal Shelter ahead of “the busy Christmas pet adoption season,” the press release revealed. They will complete the upgrades with “a refreshed exterior and lobby, new dog kennels, a trendy outdoor space and a custom cat playroom.” 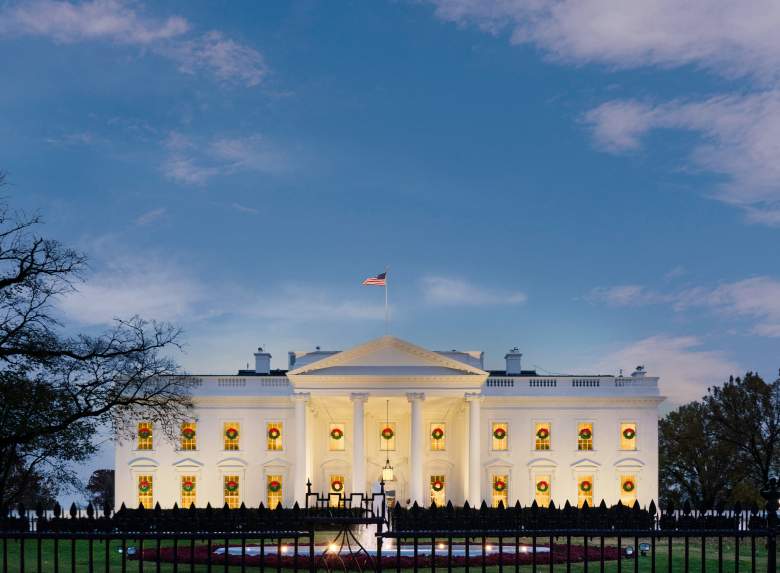 HGTVContinuing with tradition, Mrs. Trump’s signature Christmas wreaths hang on the outside windows of the White House as seen on White House Chrsitmas 2018. The 2018 theme of the White House holiday decorations is ‘American Treasures,’ and features patriotic displays highlighting the country’s ‘unique heritage.

WHAT THE SHOW IS ABOUT: The annual special will take viewers behind the scenes of the White House’s three-day holiday transformation, including the “spectacular trees, breathtaking decor, including gingerbread creations and much more,” the announcement explained.

’Holmes For the Holidays‘

WHO IT STARS: The stars of HGTV’s “Holmes Family Rescue,” Mike Holmes and his children Sherry Holmes and Michael Holmes, Jr.

WHAT THE SHOW IS ABOUT: In the holiday special, the family will deck it out in a competition for the best-decorated house. Mike’s uncle Billy Bell will judge.

The trio work with their spouses to create three different looks. Mike and his wife Anna will go for a “modern Christmas theme,” while Sherry and her husband Blake transform their backyard “into a North Pole winter wonderland,” according to HGTV. Michael and his wife Lisa Marie chose a “cozy, rustic holiday theme” inspired by her love of animals.

“In the midst of the merriment, the Holmes family also will share holiday safety tips and give back to the community in a meaningful way through their extravagant displays,” the announcement added.

READ NEXT: Nicole Curtis Reflects on Life Since Her TV Debut

Loading more stories
wpDiscuz
0
0
Would love your thoughts, please comment.x
()
x
| Reply
Deck the halls and get in the holiday spirit with HGTV's seasonal lineup!