Zooey Deschanel showed off glamorous “date night” photos with her HGTV-star boyfriend Jonathan Scott, of “The Property Brothers” in Instagram photos. The couple was at the premiere of Deschanel’s new movie, “Dreamin’ Wild” at the Venice International Film Festival in Italy on September 7, 2022.

The series of photos posted by Deschanel offer fans a behind-the-scenes look at their big night out, starting with Deschanel applying her makeup. Deschanel, donning a stunning blue dress, posed alongside her black tuxedo-clad contractor husband. The couple has been dating since 2019 and Scott has often accompanied Deschanel on red carpets.

“We definitely wanted the classic tailoring that Dolce & Gabbana is famous for, and obviously, they have the most incredible team of amazing artists there,” she told Vanity Fair. “The dress is classic, but asymmetrical at the same time. … I don’t think people completely appreciate it until they see the craftsmanship that goes into a dress like this. It’s a once-in-a-lifetime experience, seeing really close up how a gown like this is made. It’s really exciting.”

Scott previously shared a few photos from their trip to Venice. He wrote in one post, “Getting our steps today in beautiful Venice 🇮🇹”

In another post, he showed off several videos saying, “This is a POV I could get used to 😅🥰”

Italy has held a special place in the hearts of “The Property Brothers.” Jonathan’s brother, Drew Scott, married his wife, Linda Phan, there in 2018, according to People. Linda told the magazine in 2018, “We are still floating on clouds… today couldn’t have been more magical. Surrounded by so many loved ones in such a beautiful place was unreal. We are very, very lucky. Friends, family, amazing food, blue skies and being even more in love than ever before — what more could we ask for?” 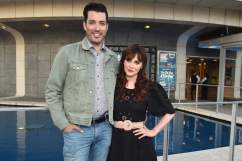 Deschanel Stars Alongside Casey Affleck & Walton Goggins in ‘Dreamin’ Wild,’ Which Is Based on the Lives of Brothers Donnie & Joe Emerson

Deschanel stars in “Dreamin’ Wild” alongside Casey Affleck and Walton Goggins, who play brothers Donnie and Joe Emerson in the bio-pic. It is the true story of an album of the same title that was discovered decades after Donnie Emerson self-recorded it. The movie is directed by Bill Pohlad and also stars Noah Jupe, Chris Messina, Beau Bridges and Jack Dylan Grazer.

According to the Venice Film Festival website’s synopsis, “What if a childhood dream suddenly came true—but thirty years later? That’s what happened to singer/songwriter Donnie Emerson. His dream of success suddenly—and unexpectedly—came true but only as he approached 50 years old. And while it brought hopes of second chances, it also brought ghosts of the past and long-buried emotions as Donnie, his brother Joe and their entire family came to terms with their newly found fame. ‘Dreamin’ Wild’ is an incredible true story of love, hope, family, guilt, and responsibility.”

The festival’s website adds in the director’s statement, “Donnie Emerson’s story is one of love, loyalty, second chances and the possibility of dreams coming true. But it’s also about pain, regret, and the complications that dreams may bring. ‘Dreamin’ Wild’ has a quiet simplicity. It explores faith and family, guilt and responsibility. Ultimately, it’s about healing, and we need that in our world more than ever right now. That’s why I was drawn to this story. And the heart of the movie is the music. Baby was on loop in my head while I was writing, and that song’s soulfulness and raw passion permeates the movie. There is a sense of magic running through this story. You can hear it echoing through Baby. And you will feel it throughout ‘Dreamin’ Wild.'” 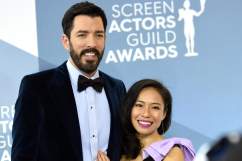