Getty Tide laundry detergent, made by Procter & Gable, on display at a supermarket.

Jason Alexander showed his face for a Super Bowl commercial.

Just in time for Super Bowl LV, the Seinfeld actor, 61, appeared in a spot for Tide and he showed the world why his face needed to be cleaned up with the brand’s Hygenic Clean Heavy Duty 10x Detergent.

In the 60-second spot, which can be viewed below, a teenager’s beloved hoodie emblazoned with Alexander’s mug made the rounds in a series of nasty situations that leave not-always-visible dirt. There was dog slobber,  residue from the garbage, cell phone gunk, bugs from a car washing and more hard-to-see grime on the trusty hoodie. In each icky scenario, Alexander’s facial expression changed on the garment.

“Believe it or Not,” the Joey Scarbury-sung theme song to 1970s TV series The Greatest American Hero played throughout the clip, in a nod to Alexander’s iconic Seinfeld character George Costanza and his memorable answering machine message.

In the end, the messy teen threw his Jason Alexander hoodie in the washer along with some Tide after his  mom told him he owed  it an “apology.”

Jason Alexander Spent Five Hours Making Faces for the Hoodie –And No, The Merch Isn’t For Sale

To prep for the commercial, Alexander had to sit for a five-hour photo session. His sole role was to make surprised, disguised, and horrified faces without talking or moving the rest of his body. Alexander told Variety a production team took approximately 1,500 pictures of his face while a director commanded the session via Zoom.

“The tricky part was you can do a whole bunch of attitudes and facial expressions if you can move your head, but for this, I had to be flush on,” Alexander told the outlet. “When you can’t move your head it’s really about the facial muscles.”

Fans who saw the spot ahead of time on Instagram immediately asked Tide where they can buy the Jason Alexander hoodie, with some challenging parent company Procter & Gamble to make the hoodies for charity.

According to Elite Daily, the Jason Alexander hoodie is not a real item and as of now, Tide doesn’t have plans to start selling them as part of their ad campaign. 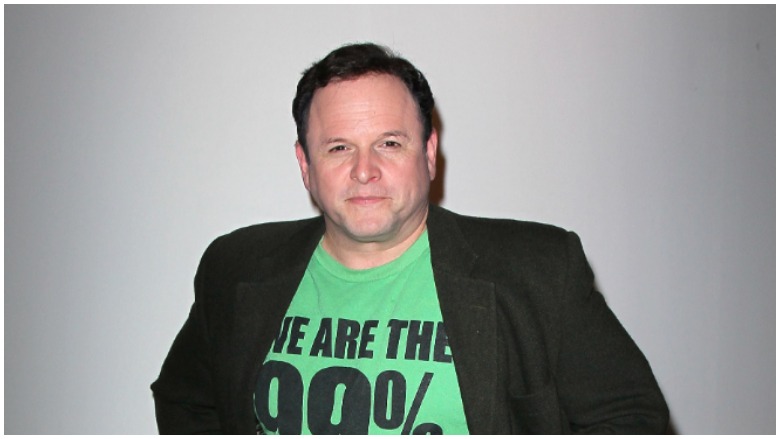 Alexander previously appeared in a splashy 1995 Super Bowl commercial for Frito Lay’s Rold Gold pretzels. He has also been in ads for Hershey’s chocolates, KFC,  and the carmaker Chrysler.  He also starred in a McDonald’s ad for the now-defunct McDLT sandwich from the 1980s.

Alexander told Variety that his work in commercials provided him with a paycheck when he was an up-and-coming off-Broadway actor. He also revealed that he went after commercials “aggressively” as a young actor.

“People really, really look forward to the commercials,” Alexander told People of the Super Bowl timeslot. “It’s kind of like when you’re doing a TV show and they give you the best slot in television.”

He also added that he was flattered by the fact that he was chosen as someone who can satisfy the massive Super Bowl audience.

“Because it’s very large, and there’s a lot of competition for who had the best spot that day,” he said.

Alexander shared the clip of his Tide ad on Instagram and wrote, “Well, I’ve finally made it. #SBLV #TideHoodie.”